President Trump, the Results of Your Psych Eval Are In. We Need to Talk. 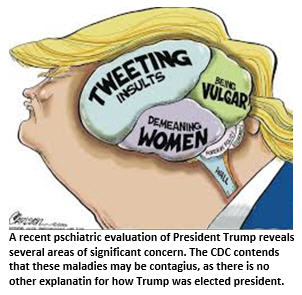 My name is Dr. Nathan Feingold. I’m Head of Psychiatry at Johns Hopkins Medical Center. Recently, you received a court order to submit to a battery of psychological tests due to widespread concerns by members of your own administration, Congress, and your wife, about your stability. Each has observed that since you became president, your behavior has become increasingly erratic, or, to quote your recently fired FBI Director, “the dude’s batsh*t crazy”.

This is an executive summary of the results. My findings highlight several areas of serious concern about your overall emotional, psychological and mental health.

Your reading comprehension scores indicate a 4th grade reading level. When exposed to passages from various works of literature, including the Gettysburg Address and Shakespeare’s King Lear, you had difficulty identifying the underlying meaning of the passage. For example, you incorrectly opined that the primary point of Martin Luther King’s I have a Dream speech was that he dreamed he could own a house as nice as Trump Towers.

On the positive side, you scored close to the median 3rd grade comprehension level when asked the colors of the main characters in the Dr. Seuss book, One Fish, Two Fish, Red Fish, Blue Fish. In reviewing the results of your vocabulary and spelling profile, your scores dropped off significantly for words having more than one syllable. For example, the capital of Arizona is spelled Phoenix, not Fenicks. And the word you were looking for was “presidential” not “precedential.”

You were subjected to 50 different images, of which three appear above. Your responses to many showed a consistent theme: a depiction of what you kept calling “Fake News” channels peddling lying conspiracy theories about you colluding with the Russians in the election, based on nothing more than documented evidence and your own words. This obsession indicates a level of paranoia not seen in any president since Nixon. We threw in one ringer – a drawing of a bunny. You interpreted the image to represent a Muslim terrorist blowing up Mount Rushmore. Honestly, I’m stumped as to how you came to that interpretation. Did you never have any pets growing up? 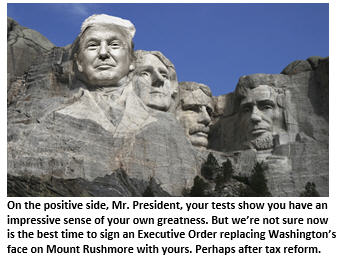 At first blush the results here appeared to be encouraging. Your own perception of your social skills, intelligence and feelings of superiority to others is off the charts, scoring in the top 1/10th of 1%, eclipsing the previous high test score held by Kanye West. But on further analysis, your responses indicate an underlying unhealthy need for approval and constant adulation – what I would describe as a severe case of malignant narcissism. I apologize for using such complicated verbiage in the previous sentence, so let me use words you may understand: You’re an ASS.

Ability to Separate Truth from Fiction

If your highest scores were in self-admiration, your lowest came in the area of discerning – or remotely caring about – truth versus falsity. You were asked to list ten things that you knew to be true. Upon fact-checking, we concluded nine of your “truthful” statements were demonstrably false, including:

“My inauguration had the biggest turnout in history.”

“My Muslim ban was not about trying to keep out Muslims.”

“ I fired FBI Director Comey because he hit on Melania.”

In fact, the only statement we could conclusively establish to be truthful was this one: “My name is Donald.” Perhaps you never were taught why it’s important not to habitually lie about your accomplishments. I suggest you do some remedial research on this subject. Perhaps start with the book, The Berenstain Bears and The Truth. It has very few big words and lots of fun pictures.

Another area of serious concern is your inability to develop healthy, high-functioning relationships. You appear to have difficulty with basic concepts like “Canada is our ally. Russia is our enemy.” When shown a map of the world, you incorrectly identified the following as hostile nations: Mexico, Germany, South Korea, and Oregon. And calling people Crooked Hillary and Lying Ted or tweeting that Meryl Streep is highly overrated is not an effective way to make new friends.

We also tested your mental aptitude in a couple important domains:

Your overall math skills ranked in the top 20% – for orangutans. While you scored well below the mean for humans on multiplication and division, you scored surprisingly high in ranking things on a one-to-ten scale, particularly when it comes to rating women’s breasts. Not sure why you felt it important to add that Angela Merkel’s breasts “are at best a 3”. By the way, “huge” and “bigly” are technically not numbers.

In the several assessments you were exposed to, we found that you struggled to comprehend anything beyond the most elementary facts. You chose the correct answer, however, when you selected “cats say purr”. But you displayed difficulty evaluating more complex issues like how a democracy differs from a dictatorship.

Disturbingly, in the following question you incorrectly chose response D.

I’ve identified several other areas of psychological and emotional dysfunction including a marked difficulty controlling your sexual impulses, a tendency to engage in temper tantrums when watching people say unkind things about you on TV, and an overall inability to get along with others unless they promise not to testify against you before the Senate Intelligence Committee. Your basic trustworthiness scores placed you somewhere between a two-year old child and an adult rattle snake.

It is my recommendation that you address these extensive personality disorders immediately, before you become an imminent threat to the safety of approximately 7.3 billion people. I suggest you take an extended hiatus from your job and turn off your phone immediately. It’s driving the rest of us crazy.

I urge you to enter an in-patient facility to undergo extensive additional testing, combined with powerful sedatives and 24 / 7 monitoring by experienced mental health professionals. I would also like to see you begin a daily program with no access to TV or Twitter, combined with extreme electroshock therapy and confinement to a padded cell. I don’t know whether it would help any, but it sure would give me – and millions of others – an enormous amount of satisfaction.

Please get help – quickly. For all our sakes.