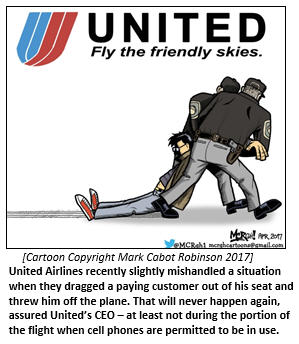 Passengers whose luggage exceeds the 50-pound weight limit will no longer have to pay a fee. Instead, the offending luggage will simply be returned to the baggage claim customer service desk – at the place of origin – once the flight has taken off. 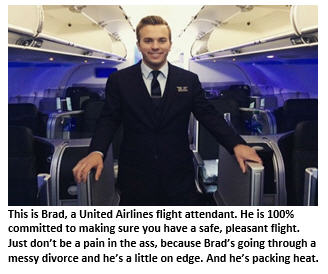 Passengers who attempt to board before their section has been called will no longer be exposed to full body cavity searches. If they are suspected of trying to smuggle snacks onto the plane, searches will be narrowly confined to the breast and groinal areas.

Passengers who fail to fit their carry-on luggage into the overhead compartment will no longer have their bags confiscated and sold to the highest bidder.

Passengers who exceed the ten-minute limit in the lavatory will no longer be subjected to an announcement over the PA that “the passenger in seat 32B has exceeded their bathroom time allotment.”  Instead, all other passengers will be encouraged to hurl their second bag of peanuts at the infractor upon his exiting the lavatory.

First class passengers who complain about their meal will no longer be downgraded to coach for being so ungrateful. But they won’t get the Crème brûlée dessert.

Passengers who repeatedly press the call button causing a disturbance to the cabin crew will no longer be subjected to verbal abuse by a flight attendant. They will simply be shunned for the duration of the flight. 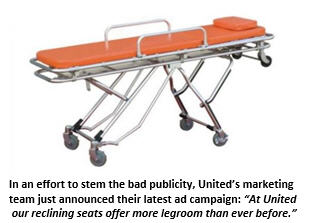 People suspected of stealing the in-flight magazine will no longer be frisked upon disembarkment. Living with the guilt of what you’ve done should be punishment enough for your brazen thievery.

Finally, if United is overbooked and needs volunteers to leave the plane, security guards will never again haul a passenger down the aisle against their will. Instead, flight attendants will sedate them, quietly place them in a wheel chair, and shove them out the emergency exit – preferably before the plane has begun taxying.