The Joy of Sleeping 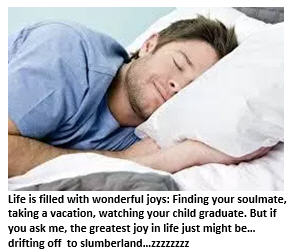 Three of the greatest pleasures in life – and I’m sure you will agree – are: relaxing poolside in a sunny tropical location, eating cookie dough ice cream, and sleeping. When my number is up, I hope to go out napping on a chaise lounge in Hawaii with an empty quart of cookie dough ice cream on my lap.

Seriously, is there anything more blissful in life than napping on a rainy afternoon? Oh sure, I hear you thinking, “You don’t want to waste your life away catching z’s, do you?” To which I say, “Of course I do!” I read an article that said on average, human beings spend 33 percent of their lives sleeping. I estimate I’ve spent closer to 38% – but then I’ve always been an over-achiever. (I would have read the rest of the article, but I was snoozing by the fourth paragraph.)

You know the kind of people I can’t stand? People who get up at 4:30 am to work out at the gym for an hour before zipping through the entire New York Times crossword puzzle, while making a kale & kelp milkshake for breakfast before heading off to work by 7 to cure cancer or feed the homeless – no doubt with kale & kelp milkshakes.

To be honest, for decades, I used to be one of those people (except for the k & k shakes, that is). But now that I’m retired, I realize that for all those decades, my priorities were seriously out of whack. Lately I’ve discovered the joy of sleeping in. Oh, I still wake up by 5:30, but now I pass the next two hours lulling in bed, debating how long I can stay there before my grape-sized bladder gives out. I love sleeping. It’s that tranquil period between 10 pm and 7 am when I don’t have to wash dishes, do laundry, clean the basement, pay bills or listen to my wife complain about how much time I waste sleeping.

Folks have long debated about the greatest invention of the past century. Some argue it was the automobile. Others insist it was television. Or computers. Or the internet. Or the Roomba. They’re all wrong. The winner, hands down, is the recliner. I’m not very religious, but if I had to pick a god, I’d probably choose whoever came up with the La-Z-Boy sofa sleeper. 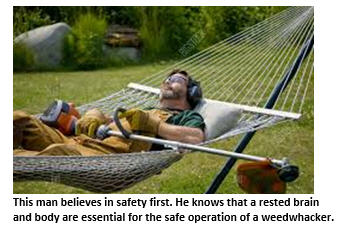 Given how wonderful it is to lay one’s head upon a downy pillow and drift off to the land of Nod, it mystifies me that toddlers make such a fuss about bedtime. Their ear-piercing screams befit a torture session on the rack. They resist with all their might, attempting to stave off one of the greatest joys in life. There are many theories to explain this confounding behavior. They are all bunk.

The truth is simple: toddlers are idiots. Which reminds me, whoever came up with the phrase “sleeping like a baby” clearly never had a baby. Babies sleep, on average, 20 minutes before wailing for you to pick them up, feed them, bounce them, change their diaper or let them lick the remote. Babies are some of the stupidest people you’ll ever meet. I should know. I used to be one.

My wife says that dozing during the day is a complete waste of time. She’ll say, “Tim, it’s gorgeous outside. Let’s go for a hike or maybe kayaking?” I say, “When they invent a kayak with a built-in recliner and a blanky, give me a shout.”  On our Italian vacation, she relished walking for hours on end through medieval cathedrals, Roman ruins, and cavernous art museums. The hi-lite of my Roman holiday? Arriving back at our hotel room, kicking off my shoes, and crashing. In fact, I would have gladly forgone the cathedrals, ruins and museums if it meant I could have napped longer.

Americans especially don’t understand the importance of sleep. Mexicans get it – it’s called “siesta” and it is in fact enforceable by law. A recent study showed that a daily catnap of just an hour adds on average, two years to people’s lives. Interestingly, they spend most of those two years sleeping, so that’s a double bonus, if you ask me. 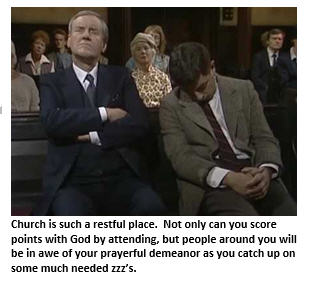 I have the good fortune of being a sound sleeper. The same can’t be said for my wife. Many mornings, she’ll exclaim, “Wow, did you hear that thunder storm last night?” Of course not! A freight train could have derailed just outside our bedroom, the sirens of fire trucks racing to the scene, and I’d sleep through it like a hibernating bear. But not my wife. In fact, she turns the clock away from her because the faint LED numbers keep her awake.

Well, I see I’ve been writing for almost fifteen minutes, and I have to tell you, I’m really tuckered out. I probably should go help my wife out in the yard. She asked me to take charge of the weeding, mowing, and leaf raking. And as a caring husband, I plan to get on that – right after I take a short power nap – in my recliner, with a bowl of ice cream. Maybe I’ll try Maple Walnut for a change.