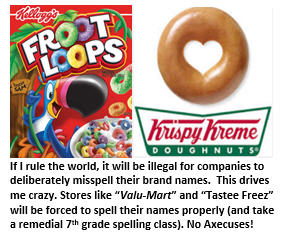 What a wonderful world it would be if they just put me in charge of everything. Oh, and by the way, I would officially ban cauliflower. It serves absolutely no purpose, whatsoever. Anyone who says they like it is lying and will be sentenced to eating nothing but cauliflower for a year. Then we’ll see how much you love that God-awful food.

Ah, if only I ruled the world….