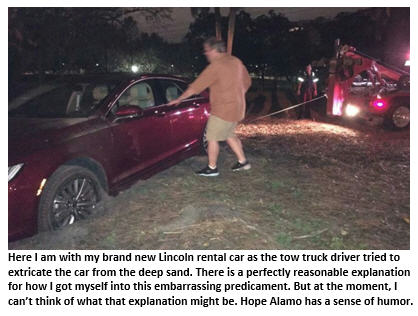 When it comes to car ownership, I’m a Hyundai kind of guy. I’ve always purchased safe, practical, mid-priced, somewhat boring cars. I’d never driven anything remotely top-end in my life. But on a recent Florida vacation, the rental company gave me a free upgrade to a luxury car. Not just any luxury car. Oh no. I’m talking an elite LINCOLN!

What a sweet ride it was. Smooth, gorgeous lines, spacious leather seats, rocket ship acceleration, and more dashboard buttons than you’d find in the cockpit of a 747. There was enough room in the trunk to easily stow both of our kids – not that I would seriously consider such a thing – unless they were acting horribly, of course. It was the most incredible driving experience of my life.

Everything was going along swimmingly. My wife was speaking to me for a change. The weather was 75 degrees and sunny every day. And people I drove past were giving me that “what makes you think you’re better than me?” look. Answer: “I’m driving a Lincoln – You’re driving a Ford Fiesta.”

Maybe I was getting a little too full of myself driving around with that smug expression on my face. I guess it was just a matter of time before God weighed in to teach me a lesson in humility. And that happened right after I went to church. Technically I wasn’t there for a church service. That just happened to be where a classical guitar concert was taking place. The church parking lot was full – of Chevys and Priuses and such. But not a single Lincoln – until I made my grand entrance, with my smokin’ sunglasses. I was seriously stylin’ in my Linc. (I’ll bet that’s what cool dudes call their Lincolns. But I’m just guessin’.)

The paved parking lot was full, so I ventured to the overflow area – an adjacent grassy field. The concert was amazing. But all I could think about was getting back to my sweet ride. When the music was over, the lot was jammed, with all the Honda Henry’s trying to fight their way to the exit. But this Lincoln Lawyer had a better idea. Everybody was headed right, so I headed left. It was dark out, and there were no street lights to guide my path as I exited the grassy knoll. Before I knew it, I discovered it was a dead end, so I began to make a U-turn – a U-turn to HELL!!

That’s because the grassy field my car had been parked on transitioned into a pine-needle-covered field hiding underneath it a massive swath of deep, soft sand. My precious car quickly became inextricably trapped. I tried rocking back and forth, to no avail. Then I tried rocking the car back and forth. But that only pushed the Lincoln deeper into its sandy grave.

I conscripted several concert goers to help push my car out. But not even the collective strength of four strong men – plus two embarrassingly weak ones – was enough to make a dent – so to speak. I was stuck – no doubt God was laughing at my predicament – probably because I had not attended a church service in several weeks – okay, several months – okay, since April 2009. I hear ya, God. I’ll start going more often. Just help get me outta here!!

I honestly can’t say exactly how long it was until the tow-truck finally arrived – I’m guessing two days, but I have never been very good at measuring time. The driver looked like a good ole boy with his long pony tail and arm-length tattoo. His name was Ramie. When he sized up the situation, the first words Ramie spoke in his thick, slow southern accent – and I’m not making this up – were, “I’m guessin’ you’re naht from ahround here, are ya?”  Then I tried to make small talk and said, “I’ll bet you have to tow people out of situations like this all the time, don’t you?” “Uh, nope” was all he muttered. But what he wanted to say was “uh, nope – ya dumbass!” 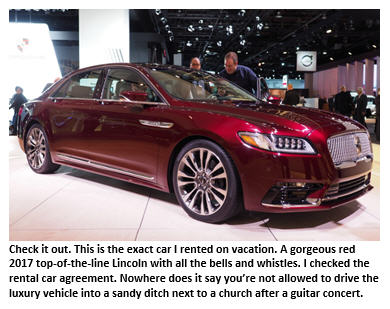 Then Ramie required me to sign three release forms. The first released him and the towing company from any liability for damage to the car in case he ran into problems. The second released him from liability with the rental car company. I’m not sure what the third release was for, but I’m betting it released him from any liability for telling all his buddies about the moron who was stupid enough to get his car stuck in sand because he was too impatient to use the regular exit like everybody else.

It took him a long time to figure out exactly how to pull the car out without his own truck getting stuck in the same mess. I offered to help, to which he curtly replied “Uh, ah think you’ve done enough ahlready.”

He repeatedly had to start over because the car’s tires were buried deep in the mire. With each attempt, as he started to pull out my precious Lincoln, its tires just burrowed in even more. But eventually, sometime before dawn, Ramie was finally able to pull the vehicle out. By now, the hood, roof and sides of the car were covered in sand. The only thing seriously damaged was my pride.

I headed straight to a car wash to remove all evidence of my crime, because I sensed that taking a Lincoln for a spin in a sand trap might be a teeny weensy violation of my rental car agreement. So, please don’t rat me out to Alamo Rent a Car, okay?

I reflected on this experience on our plane ride home from vacation. Perhaps the life lesson was that I should never have rented such a frivolous luxury car in the first place. Then again, since this happened in a church parking lot, maybe it was a message from God telling me to stop being so vain and materialistic. Or perhaps the lesson was I should have rented a Hummer. Then again, maybe my wife’s simpler explanation is right: “You’re such an idiot.” Yeah, I think that’s probably the takeaway to this story.