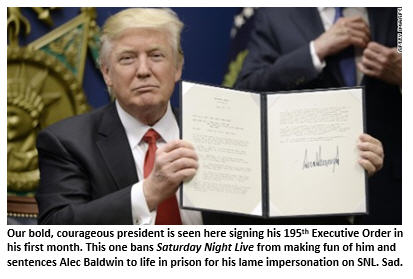 Fox News confirmed that there’s no truth to rumors that our legitimately elected President colluded with Russian intelligence and Putin to influence the recent election or that this could be proven if he’d only release his tax returns. Russian president Vladimir Putin closed the issue once and for all by issuing a written denial of all the false allegations about Trump being his puppet saying, “Your president is absolutely not my puppet. A marionette, maybe, but definitely not a puppet.”

The entire nation rejoiced at the news that all of President Trump’s brilliant, eminently qualified cabinet picks were confirmed by historically huge margins. His incredibly popular pick for Education Secretary, Betsy DeVos, vowed that in her first thirty days, she would, “make Americas’ educasional sistem grate again” by shutting down all public schools and making Christian-based home schooling the only option for K-12 education. Grizzly bears are protesting the decision. Grizzly bears are totally lame. 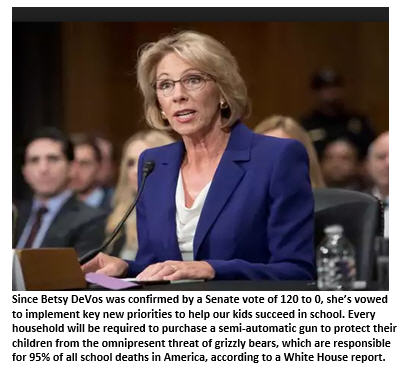 In more stunningly good news, the White House announced today that job growth in January was the best single month of job growth in history. While several factors contributed to the strong job numbers, most economic experts point to the fact that Donald Trump is the best president in American history, way better than President Obama, who destroyed our economy by shipping the best jobs overseas to his Islamic terrorist pals. Also, Obama was black.

Plans for a wall to keep out Mexico’s population, 74% of whom are notorious rapists and drug lords, are coming along big league. Negotiations are going unbelievably well to get Mexico to pay for it. As a backup plan, in the extremely remote chance Mexico reneges on its promise to foot the bill, talks have begun to get Germany to pitch in. If Angela Merkel refuses, the White House will order WikiLeaks to release documents that prove the German Chancellor is really a man – with really bad fashion sense.

Steve Bannon, continues to do an outstanding job and is the most popular Senior Counselor in American history. President Trump will announce later today that Rasputin, we mean Mr. Bannon, will be given the new title of Minister of the Western American Sector, to oversee the newly designated western third of the country. No word yet on who will be appointed Ministers of the Central and Eastern Sectors, but speculation is heavy that the president’s sons Donald Jr. and Eric will toss a coin to settle the matter.

Rumors that Melania Trump was somehow upset by something President Trump said at the Inauguration are total fabrications. She just had something in her eye. She is doing much better now and does not want to talk to anybody – about anything – for the next four years. All questions for Melania should be directed to the White House Spokesman for Extra-Marital Affairs – Manhattan Branch.

Today, President Trump laid a wreath at a memorial service to commemorate all the victims of the tragic Bowling Green Massacre, which the fake media totally ignored. Victims’ families said the president was incredibly compassionate and good-looking.

The latest polls have been released, and for the fourth consecutive week they show overwhelming support for President Trump. 98% of Americans approve of the job he’s doing and 52% of respondents disagree with the statement “Our president is a f*cking insane narcissist!” Any polls which indicate that our leader has the lowest approval ratings in history are total lies put out by fake polling organizations like Gallup, Quinnipiac and USA Today, all of which are wholly-owned subsidiaries of ISIS. 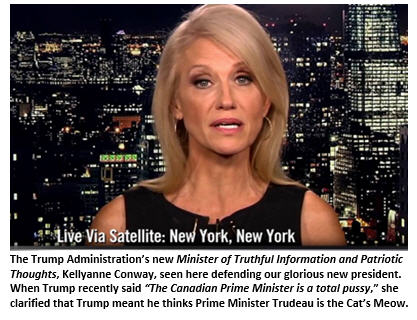 Recent reports that thousands of people had been protesting at our nation’s airports over the Muslim travel ban turned out to be totally false, of course. Seems they were all simply frustrated over long flight delays at 45 different airports – all caused, coincidentally, by bad weather. When interviewed, travelers all shared how much they loved our president and added, “Is that what you needed me to say? Please don’t take my children away from me – for the love of God, PLEASE!!”

The National Park Service is being reorganized to optimize efficiencies and reduce waste. The President announced that he’s appointed the Chairman of BP Oil to head the NPS. The new boss has pledged to shut down any parks that fail to produce at least 1,000 barrels of oil per day. Americans are thrilled with the President’s decisive action to look for new energy sources. One supporter praised it, saying, “It’s about time. Yosemite was totally overrated!”

In other news, President Trump has issued yet another EO decreeing that the name of the nation’s capital will be officially changed from Washington, D.C. to Trump City. When asked why he was doing this, the President tweeted, “I just like the sound of it. Besides, Washington, D.C. is way too hard to spell.”  Upon hearing of our capital’s name change, millions of Americans took to the streets shouting, screaming and chanting their unanimous support for Trump’s most recent bold decision.