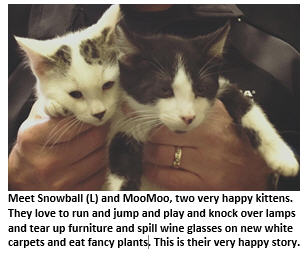 The nice man would come in several times a day to feed them, pet them and clean up their poop and pee, and say some silly-sounding words they could not quite understand but sounded like “Fur the loff of Godd” – whatever that meant. Snowball soon discovered a fun toy – a roll of white paper on a stick that went around and around when he pawed at it. Before he knew it, Snowball had removed all the paper from the stick and spread it all over the floor. That made Snowball very happy. 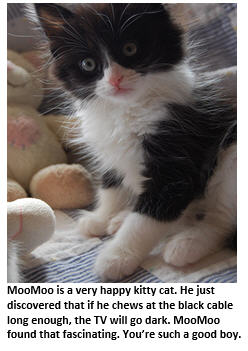 MooMoo discovered that he could jump up on this round seat with a giant hole in the middle of it. But he slipped one time and fell into a little swimming pool. He tried so hard to climb out, but the walls were too steep and slippery. MooMoo was overjoyed when the nice man heard his meows and rescued him from the pool. The nice man even raised his voice and said some more funny words that MooMoo didn’t understand and which this storyteller cannot print because he might get in trouble with his editor (good call – your editor).

Eventually, the nice man decided to let Snowball and MooMoo have an even bigger room to play in. He called it the bedroom. They were even happier than ever before. They ran and jumped and played and explored every corner. And they competed to see who could poop and pee in the most hard-to-find places.

Then Snowball discovered something incredible. He had claws! And using these claws, he could climb all sorts of things – like the back of the man’s expensive leather chair. Soon Snowball had taught MooMoo how to insert his claws deep into the leather so that he too could climb up the chair – over and over again. It was so much fun!

Then the nice man noticed the fun claw marks all over his once valuable chair and shouted at the top of his lungs with happiness. It sounded something like “you birsterds have forking ruined my godhammed share”, but that’s just a guess, because Snowball and MooMoo don’t understand English.

Every day, they found new, fun things to play with. Snowball discovered a table lamp that made everything bright. But when he leaped on top of it, it tipped over and, for no apparent reason, just stopped making everything bright. And then he peed.

Meanwhile, MooMoo noticed the bed’s colorful hand-woven quilt that the nice man’s mother had made for him years ago. MooMoo discovered that if he scratched at the thread of the quilt long enough, eventually, he could create a fun, long string. Before long, MooMoo had taught Snowball how to pull the thread out of the entire quilt.

When the nice man saw what they’d done to his heirloom, he must have been overjoyed because once again he shouted a bunch of funny words at the top of his lungs that MooMoo and Snowball could not understand. He flung them across the room and gently slammed the door behind him, leaving them back in the small room with the tiny pool. Flying was fun!

Over the next three weeks, Snowball and MooMoo grew and grew. They jumped up onto all sorts of places they’d never been able to reach before. One time, Snowball noticed that the nice man was working very hard typing a long, important letter or something on his computer. But he was not smiling. 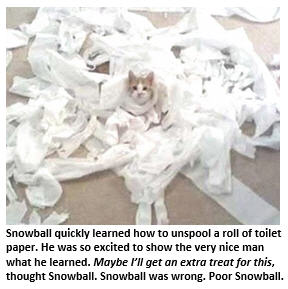 Snowball decided the nice man must be very lonely. So, he climbed up the nice man’s back using his claws, then leaped onto his computer keyboard and rolled onto his back, purring. Somehow, in just that instant, all the words on the computer magically disappeared. What fun! And sharing MooMoo’s delight, the man sent Snowball soaring off his keyboard and across the room, shouting for joy, saying something about “Holy ship. Why didn’t I ever pess SAVE!!! I’m so ducked!” Or something like that.

Then the next day, MooMoo discovered that if you grab the edge of a table cloth and keep pulling, eventually, it will slide off the dining table – along with the priceless 17th century French vase sitting on top. And the tiny pieces from the shattered vase scattered all over the floor and were the perfect size for MooMoo to bat under the couch. What fun.

The next day, the nice man decided he had had about as much fun with Snowball and MooMoo as any one person should enjoy. So, he hurriedly shoved them into his car and raced back to the animal shelter. They were very sad to say goodbye to the nice man. But he looked overjoyed, knowing some other family would get to enjoy them now.

The very next day, Snowball and MooMoo were adopted by another nice man – and his wife and two young girls. And the kittens knew they were going to be very happy for a long, long time. As they arrived in their new house, the nice family opened their small metal cages and invited Snowball and MooMoo to explore their new forever home. In a flash, MooMoo leaped up on their gorgeous suede couch – and peed. And Snowball knocked over the giant flat screen TV and watched with great curiosity as it crashed onto the floor. And the kittens were very, very happy.

[Author’s Postscript: Snowball and MooMoo are actual kittens that we have been fostering. They appear in the top photo. While the story of their adventures is all made up, not ten minutes after I finished writing this post, I discovered that MooMoo had actually chewed through and destroyed the AC adapter cable that charges my laptop – just like in the caption in the photo above. I’m not making this up. Then my computer died because it ran out of battery power, thanks to the now useless adapter cord. Thanks, MooMoo. – tej]