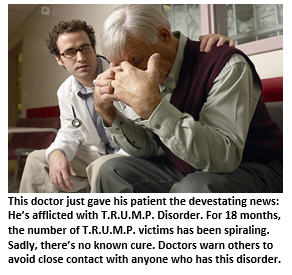 If you read tweets from anyone who uses words like  “honer”, “looser”, “unpresidented” and “leightweight”, and fail to notice any spelling errors, you’ve probably been infected. If you find yourself agreeing with incoherent tweets about how Meryl Streep is overrated or how John McCain isn’t a war hero because he was captured, odds are you are probably in the advanced stages. And if you think there’s nothing wrong with cozying up to Russian dictators who infiltrate and attempt to alter a presidential election, you undoubtedly suffer from a severe case of T.R.U.M.P. 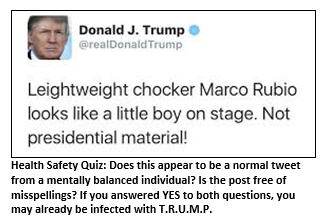 If there’s a bright spot, it’s that millions of Americans, and in particular, women and members of ethnic and racial minorities, appear to be far more resistant to this contagion. The evidence thus far appears to indicate that the higher one’s intelligence, the better able their immune system is to combat the T.R.U.M.P. virus.

A steady diet of factual information from actual news sites boosts the body’s resistance to the disorder. However, even normal, well-mannered, and amiable people, when confronted by persons infected by T.R.U.M.P., have been known to fly into a rage and spew hysterical diatribes about the end of democracy. These outbursts are typically followed by deep bouts of depression and anxiety about the future of their country as they cling to their teddy bear Sparkles. On a related note, most puppy dogs appear to be blissfully ignorant of this problem. However, interestingly, most pussy cats have an immediate, hostile reaction at the mere mention of T.R.U.M.P.

How to protect yourself from exposure to T.R.U.M.P.

In our highly connected social-media-dependent society, the threat of exposure to T.R.U.M.P. is omnipresent. Experts recommend unfriending anyone you suspect to have been infected. For added security, they advise unplugging your computer. And if you must watch television, limit your viewing options to The Big Bang Theory, Grey’s Anatomy, or pretty much anything on the Home & Garden TV network. People with particularly weak immune systems should stock up on essential food supplies, then not leave their house for the next four years, to avoid the risk of contamination.

Sadly, if you’re one of the millions of Americans unfortunate enough to have been infected by T.R.U.M.P., there is very little you can do but hope and pray that it doesn’t spread to your children. 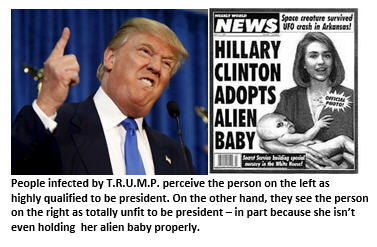 What life may be like in a nation exposed to T.R.U.M.P.

No one really knows just what to expect as this scourge goes viral in the months to come. According to scientists tracking its spread, on January 20th of this year T.R.U.M.P. had metamorphized into a far more lethal strain and may be much harder to combat than previously thought.

As of now, there is no known cure for T.R.U.M.P. But experts hope one can be found by 2020. If not, they suggest relocating to areas known not to be infected by this pestilence. To date, there are no reported instances of T.R.U.M.P. on Cape Breton Island, Canada. Alternatively, experts suggest buying the complete seven-season collection of Gilmore Girls (all 33 DVDs), now available on Amazon for the low price of $199.99. It’s not a cure. But it should get you through the end of March, at least.