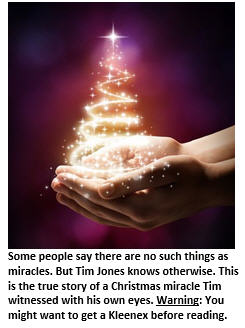 Once upon a time there was a humble family man named Tim. Tim loved the holiday season more than any other time of year – all the traditional songs, twinkling lights, frosted gingerbread cookies – but most of all, seeing the magic of Christmas in his kids’ eyes. Yes, Tim was blessed with two wonderful daughters, Rachel and Emily. He remembered so many wonderful Christmases from their youth with fondness.

However, in recent years, as his girls grew older and more independent, Tim sensed that the holiday spirit was slipping away from their Christmas gatherings. Indeed, this might be the last year that the entire family would be together for the holiday as both girls were embarking on careers in far-away cities. So, Tim made up his mind. He was going to bring back the magic of Christmas one last time!

The holidays were rapidly approaching. Emily arrived home first. Tim was so excited to see his younger daughter. After all, he’d not seen her in six full moons. Tim had a wonderfully festive plan for just the two of them. They would hunt down the perfect tree, a majestic tribute to Father Christmas. Then they’d decorate it with shimmering ornaments and glittering tinsel. But Emily was jet-lagged from her long flight home from China and went straight to bed – for the next two days. So much for that inspiration. Oh, Tannen-bomb, thought Tim.

Next to arrive was Rachel. The entire family was finally together for the first time in a year. Tim decided he’d surprise them with four tickets to an elaborate Christmas lights display – featuring over one million twinkling bulbs. Nothing would put his kids in the holiday spirit faster than being surrounded by a kaleidoscope of red, green, blue and yellow sparkling lights. But the girls put the dimmer on Tim’s illuminating plans, opting to light up their laptops and check their Facebook feeds instead. 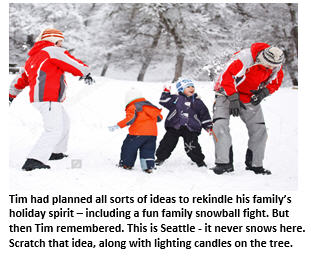 When the moment arrived to decorate the house with elves, reindeer, wreathes, and snowmen, Tim was filled with hope, anticipating the warmth of family togetherness as they transformed the house into a mirthful display of Christmas merriment. But Emily left to visit a friend, and Rachel was feeling a headache coming on. Undaunted, Tim adorned the house with gleeful, um, glee and left no nook untransformed. Surely this would inspire his girls to embrace the Christmas cheer. But at midnight, when his offspring returned to the homestead, naught caught their eyes as they nestled in their beds.

Anon Christmas Eve was upon them. Tim knew his time to bring back the holiday spirit was dwindling quickly like a sled racing down an icy hill. So, he made hot chocolate with marshmallows for all, tindered a cozy fire, and hearkened his young lasses to the living room hearth for the annual Christmas tradition of watching his favorite holiday classic, It’s a Wonderful Life. “Lame” the girls grumbled in unison – the closest they would come to singing a carol. A binge of Flip or Flop united the girls in the den as they sipped chai tea – “It’s way healthier than cocoa, Dad”.

Finally, the big day arrived. December 25th. Tim knew the girls cherished their traditional family breakfast of toasted English Muffins slathered in cheese, sliced tomatoes and seasoning. Scrumptious! No way they could ere resist this culinary delight with mom and dad on such a glorious sunshiny Christmas morning. Oh, how contrarian college children can be. Rachel was exhausted from watching six hours of Flip as she Flopped on the couch, whilst Emily protested she was watching her weight, preferring an orange – in her room.

So much for the Christmas spirit, Tim quietly pined. All his plans of sharing the joy of the holidays with his family, like when they were young, vanished like a fleeting snowflake on a warm sidewalk. He realized his schemes for an old-fashioned celebration were simply no match for Twitter, Snapchat and texting their friends. How could the Ray Conniff Singers’ rendition of Little Drummer Boy win out over the latest rap song blasting through ear buds forever affixed to his girls’ ears? Tim’s dreams of a close-knit family Noel seemed all but lost. 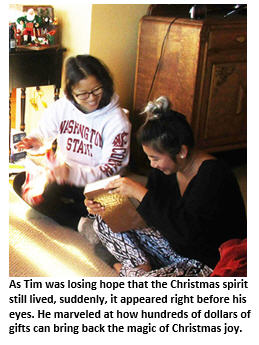 But then it happened. It was a miracle. Tim started handing out presents to his family, one by one. And suddenly, he saw his girls begin to laugh. And smile. And share. They started joking with each other. They even exchanged gifts. What’s this? Doth his eyes deceive? Why, they even hugged one another! Hugged!

Just when Tim feared the Christmas spirit of togetherness was lost forever, it magically returned. His heart warmed as he watched his daughters chat with each other, take an interest in each other’s stories and even help with the dishes.

And then something most magical happened. Tim wasn’t even sure if it really took place. Perhaps it was just a dream. No, it wasn’t a turtledove that landed in the glistening snow on yonder porch. Nor the star in the east shining brightly over a manger. It was something far more miraculous. Emily and Rachel tiptoed beside him, kissed him on the cheek and said: “Thank you, Dad, for a wonderful Christmas.” And the spirit of Christmas enveloped Tim like a toasty warm blanket.

Then they turned on their heels, cell phones in hands and ear buds in ears, aglow in the true meaning of Christmas – stuff – and raced straight to their bedrooms. They didn’t come out for another six hours. The next day they flew away. And Christmas was over. – THE END.

I never said it was a very good Christmas miracle.