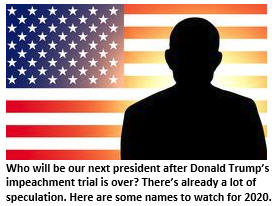 Kim Kardashian: For those people hoping 2016 would be the year we finally elected a female president, low-education white truck drivers overwhelmingly agree: Hillary was a lame choice – what with all those bland pantsuits, wonky policy papers and annoyingly high intellect. As Trump repeatedly pointed out, Hillary’s not exactly moving the needle on the 10-point beauty scale. No, what this nation is looking for in its first female head-of-state is a hot, curvy reality star who lets her body do the talking. Another qualification: Kim K has 49 million Twitter followers – almost five times as many as Hillary. (We checked.) 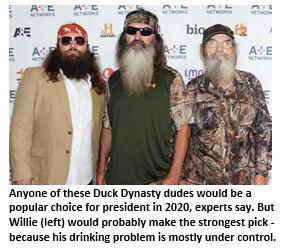 Pee Wee Herman: Herman has as much political experience as Trump. And if people were amused by Trump’s immature, petulant man-boy behavior, they should be thrilled by Pee Wee Herman. An added bonus: He appears to have no interest in girls (they have cooties), so the odds of an extra-marital scandal are considered extremely remote in a Herman administration.

David Duke: The people saw in Donald Trump someone who overtly demonstrated a racist worldview. And the people loved it. That’s why the smart money is on the former Ku Klux Klan Imperial Wizard. Oh, sure, in addition to being a white supremacist, he’s also a longstanding Holocaust denier and all-around creep, but those aren’t his only qualifications. He’s committed to making America even greater again, so long as you’re white, Anglo-Saxon, heterosexual, and a bigot – apparently, the fastest growing demographic segment in America these days.

Dennis Rodman: Some consider the fact that the former NBA star once wore a wedding dress to get married – to himself – on national TV – a sign that he might not have quite the temperament to be Commander-in-Chief – or does he? Like Donald Trump, Rodman has always been a loose cannon who routinely says offensive things for attention. But another asset he brings is that he’d come into office with impressive foreign affairs credentials, thanks to his BFF relationship with North Korean dictator Kim Jong-Un. If it looked like North Korea was about to drop a nuclear bomb on us, Kim might just think twice, knowing his bromance buddy is in the Oval Office.

Vladimir Putin: Talk about an outsider! Russia’s chiseled, bare-chested Hunk-Prez is a huge fan of the American presidential electoral process – and how easy it is to manipulate. Many political analysts think he could win. After all, in his own country, he repeatedly keeps winning re-election with 99% of the vote.

Tom Brady: The handsome, popular New England Patriots quarterback has led his team to Super Bowl victories a record four times. Can you say WINNER? Plus, have you seen his gorgeous model wife Gisele? Even hotter than Melania! Brady’s team is called the PATRIOTS – proof that he loves America. He once got caught deflating his footballs, which is against NFL rules. So, he’s a cheater – which in politics is a big plus these days.

There are also some lesser-known newcomers that insiders say to keep an eye on. Here are two of our dark horse favorites: 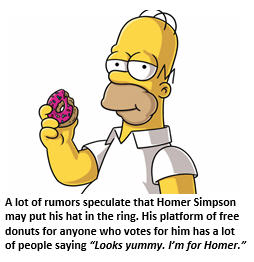 Hank Wilson: Never heard of him? Neither has anybody else. That’s his biggest asset. He’s the ultimate outsider. This perennially unemployed 42-year-old Wisconsinite not only has zero political experience, he has no discernible job skills – unless you consider his talent for making an awesome triceratops shadow animal on the wall with his hands. With an IQ close to 100, Hank perfectly represents the average American voter. Did we mention, Hank loves to fish? If elected, he’ll need a ride to Washington, as he lost his driver’s license due to a series of DUI’s.

Champ: Like Madonna and Beyoncé, his one-word name is easy to remember, as well as a symbol of his image as a champion of the people. He’s also strong, brave, kind and extremely loyal. The fact that he’s a Golden Retriever might seem to disqualify him as a candidate, but remember, no one thought Trump was qualified either. Technically, Champ is only six years old. But in dog years that makes him 42, more than old enough to meet the minimum age requirement for president.

Finally, you may wonder why we haven’t included Donald Trump in this list of possible contenders for 2020. That’s because if he survives his inevitable impeachment trial, by 2020 with four years in office, he’ll just be another establishment Washington insider. And Americans would never elect someone like that.

This is just a first look at the possible contenders for 2020. Over the next four years, the field will likely change significantly. Personally, I’d say the smart money is on Champ. Unlike our new president-elect, he can be trained to do as he’s told.