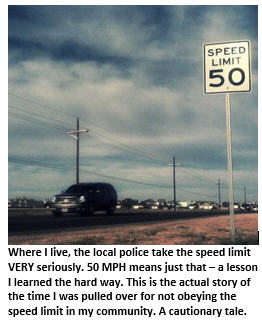 I knew I shouldn’t have downed half a six-pack of Mountain Dew Live Wire first thing in the morning. My heart rate was through the roof as I raced down the highway in my silver Toyota minivan, desperately trying to make up time. I saw the speed limit sign. It read 50 mph, just like it always read this time of day. Some things never change. I looked in my rear view mirror. Drivers were climbing up on my tail. Okay, not literally my tail. I don’t have a tail. It’s just a figure of speech. Maybe I was just imagining things, but it looked like the guy behind me wanted to run me over. My heart started pounding. My palms got clammy. I could barely hold onto the steering wheel.

Crap! In my haste to meet my buddy, I must have been speeding. Uh Oh! And what about the 20 kilos of cocaine hidden in my trunk? Nah, my memory was just playing tricks on me again. That was from an episode of Law & Order I watched this morning while I ate my usual carbo-loading breakfast of Eggos and Captain Crunch.

I slowed down, hoping against hope he had someone else in his sites. The trooper pulled up right behind me. By now I was fairly sure he was after me. When he turned on his loudspeaker and shouted “you in the silver Toyota minivan, pull over immediately”, I became slightly more convinced. Yeah, looks like this speeder was going down.

I pulled over and sat limply in my car, awaiting my uncertain fate. The burly, no-nonsense trooper slowly plodded towards me. As I watched him in my side mirror, I couldn’t help but notice that he was closer than he appeared. I trembled as I saw him firmly clutch his loaded revolver in case he needed to use it to subdue me when I attempted to overtake him with the handy six-inch tire pressure gauge I had cleverly hidden in my glove compartment for just such an encounter.

Suddenly my future flashed before my eyes. It was straight out of the movie The Shawshank Redemption – but without the redemption part. I lowered my window.  “Do you know how fast you were going?” the policeman asked sternly.

“You were doing 47,” he growled, in obvious contempt.

“I’m sorry,” I stammered. “Did you just say, 47? What exactly appears to be the problem, officer?” 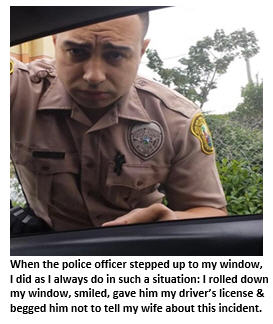 “Like I said, you were doing 47. The speed limit here is 50,” he said, his teeth grinding now with impatience.

I looked back at his seething glare, not quite sure what I’d done. “So let me get this straight. You pulled me over because I was going 3 miles per hour BELOW the speed limit? I’m sorry. Are you saying that I was supposed to be driving EXACTLY 50 and not one mile per hour less?”

The officer was now clearly furious. He locked his eyes on mine and snarled, “So you think this is funny, eh? How about I just double the ticket to $150?” (He actually said this!)

“Officer, I’m just trying to understand what I did. Can you enlighten me?” I pleaded.

“You were impeding traffic. You had four cars stacked up behind you. If you’re not going to do the speed limit, you need to pull over and let them through… you idiot.” (Okay, so I added the “you idiot” part. But I’m sure that’s precisely what he was thinking.)

So there I was. Caught in the act of committing the heinous crime of driving 3 mph too slowly. I had no excuses. I was caught red-handed. I’m riddled with guilt and shame. What will my kids think of me now that I’m a criminal? How can I face them now that the man who once drove them to soccer practice is nothing more than a vile, lawless hooligan?

I threw myself on the mercy of the officer, asking if there was any way he could possibly let me off with just a warning for my reckless driving. I briefly considered asking him whether I should go 53 mph the rest of the way in order to offset the 3 mph I was driving too slowly. But then I thought better of it and reserved my right to remain silent.

In the end, the officer let me go with just a warning. I want to thank that kind police officer for taking 15 minutes out of his busy day to read me the riot act about my dangerous driving. And officer, if you’re reading this, I want you to know, you’ve taught me a valuable lesson: Driving below the speed limit is dangerous. I’m committed to being a safe driver, which is why, from now on, at all times, I will make a point to drive at least 15 mph over the posted speed limit.