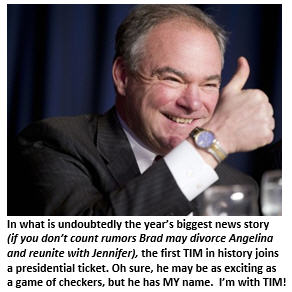 Speaking of music, there are scores of memorable songs with people’s names for the title: Michelle, by the Beatles, Abraham, Martin, and John, by Dion, or Barbara Ann by the Beach Boys. The list is endless. But have you ever heard of a song with TIM in the title? No, you haven’t. No, wait a minute. I stand corrected. There actually was ONE song with TIM in the title. Written in 1970, the song Timothy told the story of three men trapped in a collapsed mine, two of whom resorted to cannibalism against the third guy – that’s right, they ate Tim. I am not making this up. That’s what I get to claim as my song. So unfair.

Throughout our lifetimes, we TIM’s have repeatedly had to endure humiliation thanks to the misguided actions of a few bad apples sharing our name. Who are the first TIM’s that come to mind? How about Dr. Timothy Leary, the hippie college professor and psychologist whose name is synonymous with LSD and the launch of the drug culture in America in the late sixties? Or perhaps you thought of Timothy McVeigh, notorious domestic terrorist. Even in the movies, when asked who was the WORST James Bond ever, everybody knows the correct answer: Timothy Dalton, of course.

Even the likable TIM’s tend to be either lovable losers (Tim Conway, Tim Allen) or not quite operating within the navigational beacons (slightly twisted movie director Tim Burton or actor Tim Curry, the cross-dressing star of The Rocky Horror Picture Show). Heck, one of the most popular TIM’s would have to be former Heisman Trophy winner Tim Tebow. He ultimately washed out of the NFL after only three seasons.

The highway of history is littered with TIM’s kicked into the ditch. I heard about this one guy named Tim who had a lame humor blog called View from the Bleachers. Sadly, nobody knows for sure what happened to him. After years of futility, I heard he was last seen harassing people stopped at traffic lights, squeegeeing their windshields to scrounge up enough money to score Reese’s Pieces (he was apparently addicted to them). Very sad. 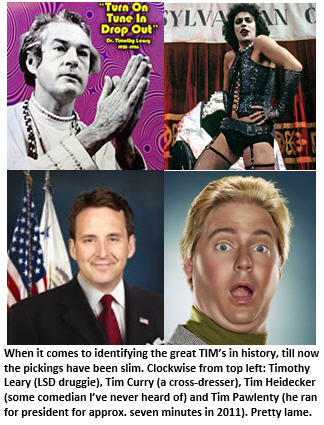 I remember sitting on my dad’s lap as a young child, asking him, “Dad, do you think someday someone named TIM could ever grow up to be President of the United States?” – to which he would usually say, “I’m sorry. Who are you?” When I would remind him I was his youngest son, he would pause and say, “A president named TIM? Seriously?” Then he’d laugh and laugh at such an inconceivable notion.

I briefly clung to hope that this day might come in my lifetime when in May 2011 Minnesota Governor Tim Pawlenty entered the race for the Republican nomination for president. It was a ray of hope that lasted not even three months, when he withdrew after finishing near the bottom of the Iowa straw poll. I cried for days.

Oh sure, 2016 may be remembered by some as the year our nation finally elects a woman president. But if you ask me, objectively speaking, the far bigger story is that this will be remembered as The Year of TIM – the year America finally puts someone with my name in the White House.

Just think about it. Come November, there might just be a TIM a heartbeat away from the presidency. On behalf of all the TIM’s who have been forgotten, ignored or ridiculed throughout our nation’s history, I’m announcing This Tim’s with Tim!

But in the off chance Hillary crashes and burns this November and our nation elects its first DONALD as president instead, I’m considering throwing my hat into the ring for 2020. During my high school years, I went to a military prep school and even marched in the Veteran’s Day Parade twice. So, clearly I’m at least as qualified as the Republican nominee to become our next Commander-in-Chief.