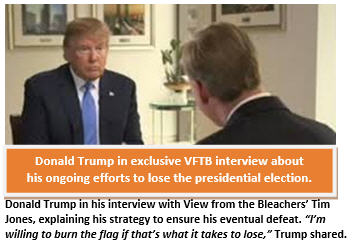 VFTB: So you really don’t want to be president?

Trump: Only in my worst nightmares! Why else do you think I said John McCain wasn’t a real war hero? Why on earth would I say Mexicans are rapists or refuse to disavow a notorious racist like David Duke? I’ve done everything I can to lose this election. Nothing seems to work. I was sure my comment in the debates about the size of my penis would end my chances then and there, but nope. People loved it. Especially women. Go figure.

VFTB: So, help me understand, Mr. Trump. If you don’t want to be our next president, why on earth are you running?

Trump: It’s all about the brand. If you think the Trump brand was big before, that’s nothing compared to my brand now. Mine is the most famous name on the planet. I’m YUUUGE! The media can’t get enough of me. No matter what I say, I keep attracting more Twitter followers. Can I tell you about Trump University?

VFTB: Maybe another time. So it’s all about the Trump brand. Nothing else?

Trump: Bingo. Oh, don’t get me wrong. I love this country. Where else could I make billions of dollars simply by running for President and posting tweets from my hotel room. Nobody is better at marketing than Donald J. Trump. But to your point, nobody wants Hillary to win more than I do. Trust me. Here, have a baseball cap.

VFTB: Thank you again, but really, I’m good. And speaking of your Make America Great Again caps, aren’t they made in China?

Trump: Yes. To be more specific, in child-labor sweat shops. You’d think people would get upset about that, but they just don’t seem to care. They tell me “Way to go, Donald, for helping all those poor nine-year-olds find jobs.”

VFTB: So what else are you doing to ensure you lose the election?

Trump: I’m constantly brainstorming with my senior campaign staff to conceive even more offensive statements to tank my campaign.

Trump: Sure. Last week, we came up with what I thought was a brilliant idea. I tweeted out, “Ronald Reagan was a closet homosexual.” I figured it would outrage lifelong Republicans. 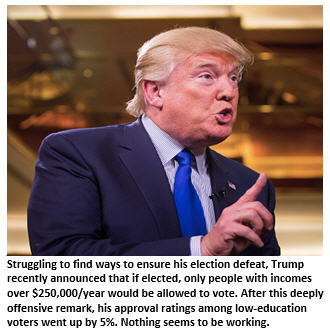 Trump: Nope. My poll numbers went up four percentage points. One person tweeted, and I quote, “I find Mr. Trump’s comments about our greatest president deeply disturbing. And yet, I find his words oddly appealing and honest.”

VFTB: That must keep you up at night.

Trump: Tell me about it. A few days later, I tweeted, “Teenage girls are super-hot. If elected, I’ll make it legal to have sex with girls under 18.”

VFTB: Ouch. Pretty offensive, that’s for sure. What happened?

Trump: On the bright side, my support among women dropped by two percent. But my support from white men over 30 surged by 12%. I can’t win. I mean, I can’t lose – no matter how hard I try.

VFTB: So are you concerned you might actually win?

Trump: I’m starting to be, yes. I’ve worked extremely hard to attain the worst approval ratings of any presidential candidate in history. I currently have an unheard of 70% unfavorable rating! And yet, yesterday, in a CNN interview with Wolf Blitzer, who is Jewish by the way, I said “I love the Jews. Love their matzah bread. But why are all of you such cheap tightwads?”

VFTB: How is that even possible?

Trump: Apparently, a lot of them said things like, “You know, Donald makes a fair point. My grandfather was rather frugal with his money.”

VFTB: So what are you going to do about it?

Trump: Clearly I need to up my game. I’m working on a tweet for tomorrow about how we should allow any kid over the age of seven to carry an assault weapon to school for protection. That should send the gun control wing nuts over the edge. I also plan to announce next week that I’ve narrowed down my list of possible VP candidates to Pee Wee Herman and Charlie Sheen. If that doesn’t work, my Hail Mary fallback plan is to tweet that Jesus was the Antichrist.

VFTB: That’s highly offensive. Good luck with that. But I have to ask, Mr. Trump, given that no matter how outrageous your remark, it doesn’t seem to hurt your poll numbers, have you thought about what you’ll do if you actually win the election next November?

Trump: God forbid I’m elected, I would immediately move to impeach myself.

Trump: I was thinking of having three-way sex in the Oval Office with Angela Merkel and Vladimir Putin and posting a live feed of it and breaking into an episode of Sesame Street.

VFTB: Good luck with that. Thank you for your time.

Trump: It was my pleasure. Make America Great Again. Wanna have a hat?