At Trump University success is what it’s all about. Trump U is about a lot of things – but above all, how you can be successful by helping me become even more successful by enrolling in Trump University. You can enroll in our Business Entrepreneur Success curriculum for slightly more than the amount you’ve accumulated in your retirement nest egg. Enrollment is now open for Fall 2016. Check out some of my incredible courses. You’re going to love it. I guarantee it. – Donald J. Trump

Argumentation and Debate 106: Fundamentals of Name-Calling: Learn how to infuriate people of different genders, ethnic origins, religious beliefs, sexual orientations, and socio-economic levels through use of sophisticated nick names like “Crooked Hillary”, “Lying Ted”, “Low-Energy Jeb”, “Little Marco” and many more. If you don’t sign up for this course you’re an idiot.

Introduction to Commercial Construction 115: The Methodology to Build a 50-Foot-High Wall: As one of the most successful commercial builders in the world, in this fascinating course, Donald Trump will personally reveal (once he’s elected president) how to build a massive 2,000 mile-long, 50-foot-high wall along our Mexican border – and get Mexico to pay for it. How is this wall possible? Here’s a hint: It’s invisible and only requires the Mexicans to all wear special collars.

Immigration Law 150: The Basics of Birtherism: Sure, they may look like Americans. But can you really be sure? This course examines how to create suspicion about someone’s American citizenship using unsubstantiated claims, innuendo, and hearsay. If your accusations are challenged, learn how to cite credible sources, such as: “I read somewhere” or “A lot of people are saying.”

Finance 208: The Essentials of Tax Evasion: Having to release your tax returns can be such a hassle – and embarrassing – especially when they reveal that you haven’t paid any income taxes for the past ten years. This course will show you how to create obtuse tax shelters and off-shore corporations, as well as evade questions about why you refuse to disclose your tax returns. Besides, it’s nobody’s business but your own (and your Bahama-based tax accountant) what you paid in taxes.

Marketing 212: Success through Social Media: This course blows up the classic marketing mix. No longer is it about the 4 P’s (Product, Packaging, Price and Promotion.) Now it’s all about social media. Learn from the Master how to build your brand following and belittle your competition 140 characters at a time.

Political Science 230: Negotiating with World Leaders: Learn the secrets Donald Trump personally admires in some of the world’s greatest dictators from Kim Jong-un to Vladimir Putin to Saddam Hussein. Learn how to negotiate with world leaders through a complex mix of bombast, mockery, and brash over-simplification of delicately nuanced issues, combined with self-assured claims about your own instinctive ability to make your opponents do whatever you want them to.

Business Law 260: How to Declare Bankruptcy While Making a Profit: Millions of Americans every year declare bankruptcy. For most people it’s a devastating feeling of humiliation and failure – unless your name is Donald Trump. Learn how you can build your own casino using other people’s money, file for bankruptcy, and leave all your investors holding the bag, while you pocket a cool $100 million.

English 309: How to Communicate with Low-Information White People: The problem with most interpersonal communication is that people get confused when others use big words and complicated phrases that require more than a third-grade education to understand. Learn how to talk down to a low-education, white male audience with easy-to-grasp words like “huge”, “win”, “tough”, “bad” and even multi-syllabic words like “loser”, “lightweight” and “tremendous.”

Financial Management 315: Advanced Principles of Philanthropy: The challenge most people grapple with when it comes to charitable donations is the outdated belief that you have to actually send the money to the charity you pledged to support. But Donald Trump has re-written the rule book on charitable giving. Learn how to generate massive positive publicity for your philanthropic pledges of millions without ever actually writing a single check.

Abnormal Psychology 315: How to Become a Rich Business Mogul Psychopath: You might think that anyone who is a narcissistic bully and certifiable psychopath could not hold onto a job at the local McDonald’s, let alone become one of the most powerful business moguls in the world. You’d be wrong. Learn how to reinvent yourself into a blowhard, bullying, thin-skinned asshole and get people to be at your beck and call. 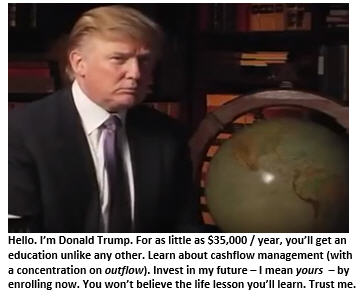 Gender Studies 331: Famous Women in History: Using a unique algorithm created by Donald Trump himself, this course assesses the greatest women in history using Trump’s patented 1-to-10 Hotness Scale. Learn why Joan of Arc was a 9.5 but Eleanor Roosevelt was only a 2. Through an in-depth examination, you will explore hundreds of famous women’s greatest assets, starting with the curve of their asses to the secrets of having perky breasts.

Literature 361: The Greatest Books Ever Written: Why waste time reading countless self-help books on how to succeed and become a better you! This course takes you through a deep dive of the only two books you need to read: The Holy Bible (by God), and The Art of the Deal (by Donald Trump). The course kicks off with The Art of the Deal, and if time permits, we may spend a week looking at a few important passages from the Bible as well.

World Religions 405: How to Bring 1.6 Billion People Together: With over 7 billion people on this planet, how can you bring roughly one quarter of them together? Learn Donald Trump’s brilliant communications strategy that has helped unite 1.6 billion Muslims worldwide in less than 12 months.

International Studies 420: Advanced International Diplomacy: The old school of thinking was that international diplomacy required delicate interpersonal communication skills, mixed with patience and a willingness to compromise. That’s so 2015. Learn the new rules of diplomacy, starting with instantly over-reacting to any perceived slight by an adversary by threatening to humiliate, sue, crush or, if need be, blow them to smithereens.

Business Strategy 430: How to Grow a Multi-Million-Dollar Business Empire: Donald Trump’s net worth is not a matter of public record but just trust us, it’s a yuuuuge number. How did he do it? This course examines how you too can build a multi-million-dollar empire. Step 1: Start by inheriting $40 million from your dad.