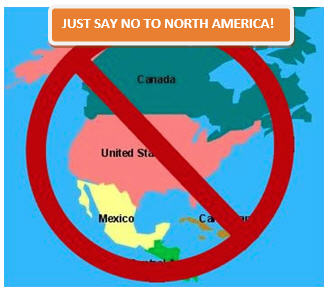 The Dow Jones plummeted more than 9,000 points in the opening 20 minutes of trading after the news. In more bad news for the economy, the U.S. dollar lost 35% of its value by the end of trading, causing a panic among investors. Many financial experts believe a deep economic depression on par with the 1929 crash is inevitable. On the positive side, Mr. Trump argued that this was actually great news for the country, saying, “Why is everybody freaking out? This will be incredible for tourism. People from Europe and even CHINA will visit our country and buy a lot more stuff and spend tons of money at Trump hotels and resorts, now that everything is so cheap for them.”

It’s unclear exactly what drove the sudden push to exit North America. When asked why they voted to secede, pro-AMEXITers gave a variety of vague responses often supported by confusing reasoning. Ned Moronovitch of Biloxi, Mississippi explained, “I want my country back. I’m sick and tired of having to do whatever North America tells us to do. I’ve had enough!” When it was pointed out that the continent of North America doesn’t actually have any control over the decisions of the United States, Moronovitch replied, “You sound like a communist. Are you a commie?” 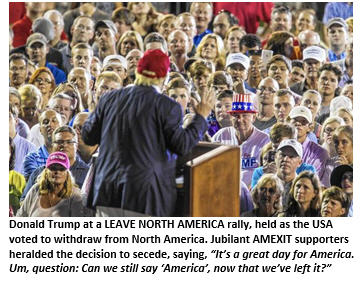 Another AMEXIT supporter, Darlene Lemming, of Murfreesboro, Arkansas, passionately defended her vote, saying, “I refuse to sit here and just let any old Mexican, Guatemalan or Canadian walk across my border to take my job – without even having to show a passport.” When it was explained to her that they can’t actually do that, and that it’s not like the open borders of the European Union, Ms. Lemming replied, “Oh yeah? Well that’s not what my cousin Buford says. He says the Mexican murderers are taking over our country so we have to stop that.”

Still another AMEXIT supporter, Jeb Haitemahl, from Spartanburg, South Carolina, argued forcefully that this move was long overdue: “It’s about time. Let’s make the USA great again.” When pressed for details as to how this would make the USA great, Haitemahl simply said, “Well, I heard that Hillary was a North American, so now she can’t run for president – which is great by me! I sure hope we build that wall on our northern and western borders too!”

An interesting perspective on a reason to back the LEAVE vote came from Bert Nottaclew, of Nome, Alaska, who said, “I’m sick of having to be stuck up here in snowy, cold North America. I can’t wait for this great country to get outta Dodge and move some place warmer. Do you think they might move the country to the Caribbean? That would be fricken’ awesome!”

The domestic and global implications of the separation are as yet unclear. For example, experts are debating whether this vote might create the long-sought opportunity to finally kick out Texas. It is anticipated that the North American withdrawal process will create scores of logistical headaches as government agencies scramble to figure out exactly what this decision means.

Senior administration officials express concern that there are no provisions in federal statutes, case law or the Constitution itself to provide guidance as to how to leave a continent. In more hopeful news, Donald Trump has indicated that he knows exactly how to do it and has an amazing plan, promising that the resulting new nation will be a YUGE improvement. But so far details of his plan have not been released.

Shortly after the decision to exit North America, Google announced that the top two internet searches in the first 24 hours after the vote were “What is North America?” and “Am I an idiot?”