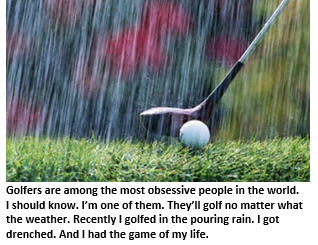 By hole #4, the rain had become a steady downpour. Ron was already whining about whether we should call it a day, as all of us were getting soaked. Now, Ron might protest that it was actually me who suggested we bail. But he’s not writing this blog, is he? So, Ron, you’re taking the fall. 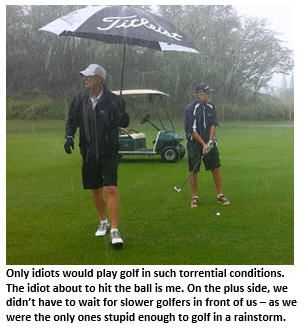 By the 6th hole, the temperature, which had been 47 degrees when we began, had plummeted to the mid-thirties. I was starting to lose feeling in my soaked, ice-cold hands. It was at this point that John seconded my, er, I mean Ron’s earlier suggestion that perhaps we should call it a day. Rain was beginning to create puddles on the greens. But Kevin would have none of it. It was an April shower. It would pass. So we kept going.

Kevin was not about to give up. For two reasons: First, he was actually having a great game – with a birdie and two pars after six holes. Second, because he’s annoyingly competitive. But guess who else was having a great game? No, not Ron. Um, no, not John either. Seriously? You can’t tell where I was going with this? Okay, I’ll spell it out. ME! Like Kevin, somehow I, too, was having a phenomenal round. After seven holes, Kevin was only leading me by one stroke. Technically he should have been leading by five, but I refused to take penalty strokes for losing my golf ball in the woods on holes 1, 2, 4, and 6.

We had somehow survived to the 8th hole. The showers were now coming down so hard, I could not see through my glasses. I had no choice but to take them off and play the rest of the round half blind. Kevin offered his usual sympathetic concern about my vision impairment: “Stop your whining. That’s why I got Lasik.” I no longer had feeling on the left side of my frozen, drenched body. The sand traps had turned into water hazards. The cups on the greens by now were completely filled with water. Ron and John had wisely decided to pack it in back at the 7th. I applauded their judgment. Kevin questioned their manhood. Now with just two holes left on the first nine, it was Kevin and me battling it out mano a mano. He drew his weapon: a brand new $275 Callaway titanium-shaft driver. And I chose mine: A knock-off Carlaway driver I bought at Target for $50 – a club I hit so wildly unpredictably that I affectionately call it The Wand of Satan (honest).

We were on the ninth tee. Amazingly, at this point we were somehow tied. I got ready to tee off. I could barely hold onto my driver, as every inch of the club shaft resembled a miniature Niagara Falls, with gushing water cascading down its length. Shockingly, I hooked my drive into the left rough, as my ball hit a tree before ricocheting back into the fairway. I say “shockingly” because normally I have a wicked slice. Kevin hit his drive straight down the fairway. His ball rooster tailed another 20 feet before coming to a halt in two inches of water. 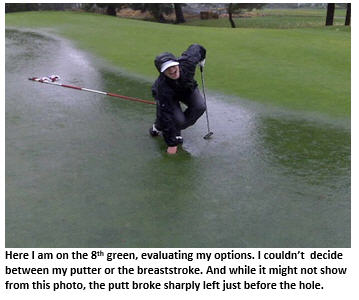 By the time our balls were on the green, Kevin had a 10-foot putt for par through an inch of standing water. My ball was 25 feet away. I estimated I could easily get up and down … and back up and down again in four putts for a double bogey. But incredibly I two-putted. Then Kevin’s second putt rimmed the cup for a three-putt – putting me ahead through nine holes by one stroke.

Kevin was determined to overtake me on the back nine. And if he was willing to keep going, then, of course, so was I. Because we’re both idiots. Oh, make no mistake, we would have played another nine holes for sure, except that they closed the course due to torrential flooding. And lightning. And the fact that any human being with a brain larger than a golf ball had left the course an hour ago.

So we had to stop after nine holes. But the key takeaway I need to emphasize is that I won. I DEFEATED KEVIN. I only share this because oddly enough, it is the truth – and in no way to annoy Kevin by sharing my amazing feat publicly.

Now Kevin may tell a slightly different story. He may weave a tall tale about a mulligan I might have taken on the third tee. But don’t listen to him. I would NEVER EVER lie about anything in any of my posts. (Okay, that last comment might have been a lie.)

That’s the view from the bleachers. Perhaps I’m off base