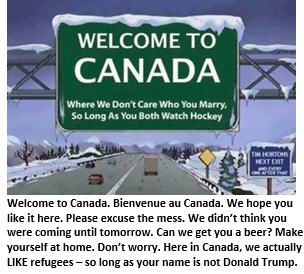 We also don’t quite understand your nation’s fascination with guns and violence. Could you please explain what all the fuss is about insisting on your right to strap a gun to your waist? Here in Canada, if you have somehow offended us, we promise we won’t shoot you. The harshest retaliation we could imagine inflicting is to unfriend you on Facebook. 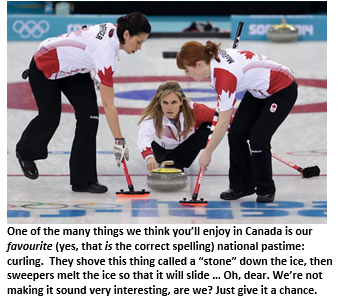 We think you’re really going to like living in Canada. Oh sure, the weather here is a tad cooler than what you may be used to. But we have plenty of sweaters knitted by nice elderly ladies to keep you warm during our hearty Canadian winters (September – May). And there are some wonderful benefits to living here:

For starters, our prime minister, Justin Trudeau, is not a certifiable whack job. And ladies, have you seen his photo? Rumor has it he’s on the short list for this year’s People Magazine’s Sexiest Man Alive cover.

Everybody is polite here. The most frequently spoken word in Canada is “sorry.” We always hold the door for the next person. And we hardly ever brag. Oh, my! We hope that last sentence did not sound overly bumptious. If so, we’re terribly sorry.

There is no Tea Party in Canada. Just tea. (Might we suggest our lavender tea? It’s very calming.)

Nobody is trying to bomb us. In fact, most of the rest of the world really seems to like us. As best we can tell, even ISIS doesn’t have strong feelings about us. We suspect that they just think the weather here is too frigid to go through all the effort.

Unlike your country, we actually do have universal healthcare. Silly as this may seem to some of you, we feel healthcare should be a universal right – not something controlled by private insurance companies whose priority is hitting profit targets set by their shareholders. But perhaps we – and every other civilized nation other than the USA – are wrong.

The only TRUMP you’ll find in Canada is in a card game of bridge.

Our national elections are delightfully short. The longest one in history lasted just 11 weeks. Think about all the free time you’ll have to do things other than watching CNN debate coverage – like drinking beer, watching curling matches, and apologizing.

There are virtually no guns here. (For those of you who like guns, see below under “disadvantages of moving to Canada”.)

Here in Canada, we don’t think all immigrants are terrorists, rapists or murderers. And when we make a mistake and accidentally let in someone who’s less than honorable in their intentions, we just ship them up to our Northwest Territory, where we leave them on an ice floe. But we provide them with a warm blanket and a case of Moosehead beer. It would be impolite not to.

We also have some incredible scenery, lovely national parks, the Rocky Mountains, gorgeous lakes, rivers and coastlines – just like in your country, only without all the crowds or that annoying pollution.

Oh sure, there are some downsides to living here. Technically our head of state is not the prime minister. It’s the Queen of England – because we’re still a member of the Commonwealth. But don’t worry. The queen’s job is mainly to visit hospitals and flower shows – and she has two adorable Corgis. Another thing that may take getting used to is that you’re expected to be polite to everybody, even if they’re rude. And for that, we humbly apologize for the hardship that may impose on you Americans and hope you won’t mind. Also, if you’re a gun lover, sorry. There’s no Second Amendment here. So, we’re going to have to ask you to leave your cache of weapons at the border crossing. But we promise to ask politely. 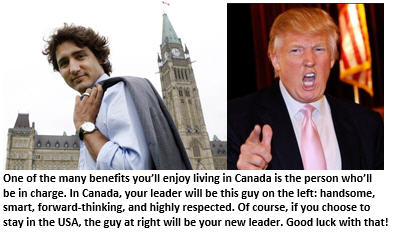 Oh, and just a few rules to heed while you’re here in our country. You must learn the proper spelling of the English language. We simply won’t tolerate your dropping the “u” from words such as ”labour” and “colour.” And it’s “theatre,” not “theater.” You are legally required to end every other sentence with the word, “eh?” You might want to start practicing, eh?

You may occasionally run into people from Quebec. They call themselves “Québécois.” They can be rather annoying to people in the other provinces when they lecture the rest of us about separation. But for the most part, they’re harmless. Just ignore them.

We hope you will enjoy your stay in our wonderful nation. But don’t dillydally getting here. The truth is, far more of your fellow countrymen have applied for refugee status here than we ever imagined. We’re starting to run out of room. So, we’ve decided to follow the sound suggestion of your President-Elect. We’re building a wall between our country and yours (and we’ll get your country to pay for it) because there appear to be far more crazy people in your nation than we had originally estimated. And we just can’t afford the risk of thousands of Trump supporters slipping into our country.

Warmest regards and God save the Queen, eh?

-The Nation of Canada

PS: Oh, one more thing. Our paperwork indicates, much to our dismay, that your Texas Senator Cruz was in fact born in our country. Please do not attempt to export him back north. We’ve absolutely no need for him. And while we’re on the subject, you can keep Justin Bieber, as well.

That’s the view from the Canadian bleachers. Perhaps we’re off base.