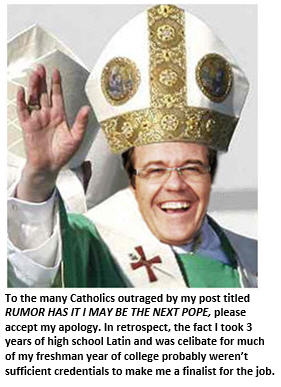 To Angus O’Shaughnessy of Halifax, Nova Scotia, who was offended by my post Seven myths about our neighbors to the north, I apologize for my insensitivity to your great nation and for my callous stereotypes about your country being totally ice-covered for 10 months of the year, along with my egregiously flippant comment that most Canadians live in igloos and leave their elderly to die alone on ice floes. In doing some additional research, I realize now I meant to say Norway, not Canada. I promise to print a correction in the next issue.

To Carlo Grimaldi of Piscataway, NJ, who was offended by my post The case against marriage equality for left-handed people, I could not be sorrier for my misguided post. I meant nothing sinister. I understand that as a left-handed American, you felt my argument in opposition to marriage rights for people with your embarrassing affliction demonstrated intolerance on my part. Since reading your thoughtful ALL CAPS, profanity-laced rebuttal, I’ve come around to your viewpoint. I now fully embrace your right as a left-handed American to marry, just like normal people. But let’s agree to draw the line there. For God’s sake, we must keep the sacred bonds of matrimony closed from those disgusting ambidextrous deviants. 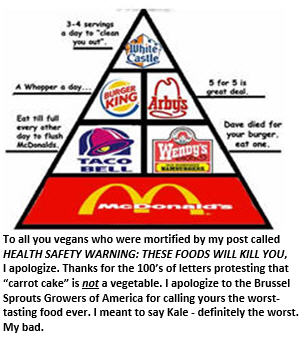 To Stanley Szczepanski of Muncie, IN, who was offended by my post An important message from your cat, I hope you can find it in your heart to forgive me. As a cat owner, I took the liberty in that article of referring to dogs as “tail-wagging kiss-asses.” I apologize for my coarse use of language and for inferring that dogs spend most of their time sniffing other dog’s butts and barking apoplectically at the mere sight of a squirrel. Nor did I mean to imply that dog’s have ADHD. This showed tremendous insensitivity to all the dogs out there that possess the requisite intelligence needed to have read my unflattering remarks about their species. I promise to write a future post trashing all cats to make sure your miniature dachshund gets equal treatment.

To Gunter Heppenheimer of Bowbells, ND, who was offended by my post Always lie to your kids, I hope you will be able to forgive my horribly errant parenting advice. When I said you should always lie to your kids, I meant to clarify this by adding, only if your wife is not there to catch you and only if you are sure your child is not recording your conversation. You can learn more wonderful parenting tips from my brand new book, YOU’RE GROUNDED FOR LIFE – Misguided Parenting Strategies that Sounded Good at the Time, now available in paperback at fine book sellers everywhere (except in Hungary – I appear to have seriously burned that bridge).

But my long list of overdue apologies doesn’t end with just my readers. I’ve been informed that I’ve done a few unforgivable things to deeply offend the most important people in my life – my family – for which I hope they will forgive me.

To my wife, MICHELE, I apologize for mentioning you by your name – MICHELE – in many of my posts and by embarrassing you, MICHELE, when you, MICHELE, had the misfortune of being seen in public – next to me. 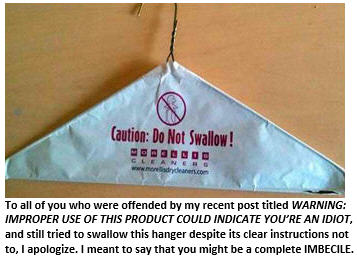 To my elder daughter Rachel, I apologize for adopting your younger sister. I had no idea she would wear your dresses and use your curling iron without telling you. That was totally my fault.

To my younger daughter Emily, I apologize for adopting your older sister. I should have known she would always try to boss you around and never let you play with her Barbie doll collection. Please forgive me.

To my old cat Dusty, I apologize for bringing home an adorable fuzzy orange kitten named Zippy, who has since grown up to be twice your size and routinely beats the crap out of you just for looking at him. My bad.

Finally, if you have been offended in any way by this week’s post, I want to extend my deepest apology. Can I make it up to you by cooking you dinner? I have this great new pickled cabbage and cauliflower recipe.

That’s the view from the bleachers. Perhaps I’m off base. If so, I apologize.