My Spirited Defense of Donald Trump 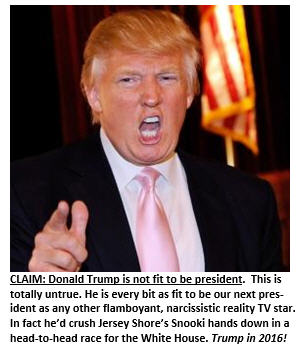 Donald Trump is a great American. In the past nine months, he has done a masterful job of uniting millions of Americans from all different backgrounds – admittedly mostly by uniting them in their deep hatred and fear of Donald Trump. But that’s simply because they’ve not gotten to know him the way I have. If only he had more TV exposure, then people would see the light.

I know all about the trash talking dished at The Donald. Unflattering slurs – like he’s a narcissist, a racist, a sexist, that he often insults people using coarse language unsuitable for a serious presidential candidate, that he lashes out at anyone who dares say a negative word about him, that he has a hair-trigger temper, that he is unpredictable and mentally unstable, and that he flaunts his wealth every chance he gets. And these are just his supporters talking. Don’t get me started about his detractors.

But these attacks are unfair. The Donald Trump I know is one to admire. Listen to my heartfelt defense of the man, who, God willing, will be the next – and quite possibly LAST – president of this great nation.

CLAIM: TRUMP IS A NARCISSIST.

Unfair. So he has a healthy opinion of his own point of view. So he harps on how he’s greater than everybody else. So he flaunts all the properties he owns worldwide. So he brags about how tough he is and how he’s the best deal maker since Thomas Jefferson engineered the Louisiana Purchase from France. So he likes to blow his own TRUMPet. Does that make Trump a narcissist? I happen to know for a fact that you bragged to your dad about your third place ribbon in your middle school science fair. Do you see me calling YOU a narcissist, you hypocrite?

Did it ever occur to you that just maybe underneath all of Trump’s bravado, there is a fragile little boy begging to be loved? That all of his braggadocio may be masking the excruciating pain of not having any friends as a young boy – or ever? No, I didn’t think so. You’re so heartless.

Simply not true. The fact is Donald Trump is all about family. He may be one of the most family-oriented men ever to run for the White House. In fact, he loves family so much, he’s gotten married three times. And none of the presidential candidates has worked harder than Donald Trump to keep Mexican families together, where they belong – with each other – in Mexico.

It is true that on one occasion, Donald Trump referred to Mexican immigrants as “criminals and rapists.” But he was only referring to the 90% of Mexican immigrants he believes are dangerous thugs. If asked, he will quickly tell you that the other 10% are composed of people who are absolutely NOT criminals and rapists – although they do tend to be unreliable parents, slackers at work, and cheap tippers – according to the Donald.

As for Muslims, Donald will be the first (and only) person to tell you unapologetically that Muslims love him. Millions of Americans misinterpreted his words when he proclaimed that we should keep all Muslims out of America. He was only acting out of concern for their own safety. He was trying to keep them safe from the rampant gun violence on America’s streets by keeping them safe at home in the peaceful neighborhoods of Syria and Iraq, protected by daily American drone strikes. 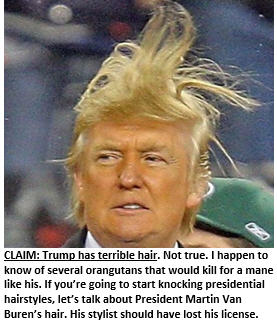 Sure, Donald Trump has a lot of money, no doubt about it. But he made his billions the old fashioned way – by starting off with millions – specifically inheriting a $40 million stake in his father’s real estate empire. But that’s all he got and not a penny more. Think about it. $40 million couldn’t even buy a major league baseball team these days. And when you do the math, $40 million is a lot closer to ZERO dollars than it is to a billion. So if you round down, in a way he started out almost penniless.

It is true that he owns a fair number of properties – after all, his career was in real estate. He’s owned Trump Park, Trump Towers, Trump Plaza, Trump Casinos in Atlantic City and Las Vegas, approximately 14 golf courses all featuring the Trump name, a fleet of Trump helicopters and his own Boeing 757, Trump One. Okay, so he’s not very original when it comes to naming things. Or humble.

In reality, there are really only two occasions when Trump discusses his enormous wealth: When he is being televised – and when he’s not. In fairness, he only brings up his long list of resorts and office towers to attract well-endowed women in their twenties to do a photo op with him, usually at the opening of a Hooters restaurant. Either that or to point out how many jobs he’s provided for thousands of people – of which many are only slightly below the minimum wage (but don’t worry – they’re most likely held by Mexican immigrants – who will soon be shipped back to Mexico, opening the door for real Americans to take back these jobs). 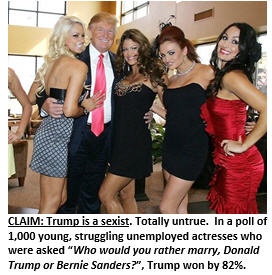 CLAIM: TRUMP IS NOT EMOTIONALLY STABLE ENOUGH TO BE PRESIDENT.

Ridiculous. I’m sick and tired of flimsy attacks – usually lobbed by Harvard psychologists who are experts on personality disorders – that Donald Trump might somehow be mentally and emotionally unstable to hold the most important job in the world. First of all, he held the top job on The Apprentice, and that show did quite well in the ratings for several years.

Trump’s critics argue that, with his mercurial temper and tendency to lash back at anyone who is critical of him, it would only be a matter of time before Trump presses the button to start a nuclear war against Russia, perhaps in response to Putin posting a nasty comment about him on Twitter. First of all, Trump is not nearly that volatile. It would take at least three negative tweets to cause him to push the button. And besides, I am sure, that if The Donald decided to declare WW III against Russia – or Iran or Norway, for that matter – they probably had it coming. The Norwegian ambassador should have known better than to make a snarky joke about Trump’s hair.

So please keep an open mind about Donald Trump. He can’t possibly be the worst person ever to be elected President. That honor would go to Millard Fillmore.