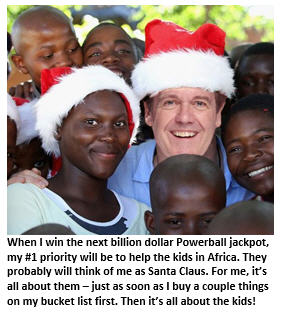 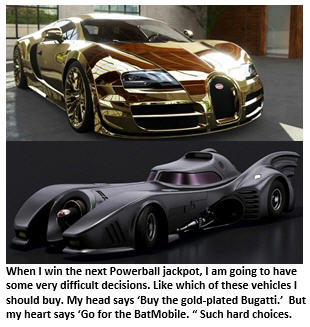 Right after I bought myself one of those solid platinum smart phones like the type the bad guy has in a Bond film – right before Bond kisses the bad guy’s girlfriend and leaps into the bad guy’s stainless steel Lamborghini – which just happens to have the keys in it. And as soon as I got my platinum smart phone, I would conference call a team of helpers to fly over to Africa in advance of my arrival, to start feeding and clothing those needy, half-naked kids.

With a billion dollars, just think about how many disadvantaged kids in Africa I could help. And I would rush to their rescue on my sweet new 100-foot luxury yacht, complete with its own surfing pool – oh, and a helipad – so that my new celebrity friends could drop in as my yacht is cruising the Pacific Ocean, somewhere between Vanuatu and Tonga – which, now that I think of it, probably have a lot of kids who could use some food and clothing, too.

You see, if I win the next Powerball jackpot, I believe in giving back to those who are far needier than I –– so long as they give this post a Like on Facebook, otherwise they’re dead to me. But back to the starving, stark naked kids. They are my Number One priority, absolutely…once I get my first billion dollars….

Number one, that is, right after I buy myself a couple of masterpiece paintings. I’m thinking perhaps an original Picasso. I’m really not all that particular as to which one – so long as it has a woman with at least three eyes and four breasts. It would go nicely in my man cave next to my Seahawks lava lamp.

But as soon as that painting is in place and my indoor bowling alley is built, I’ll be on the phone lickity split, making sure nothing gets in the way of my helping those poor starving kids wherever the heck they are…. 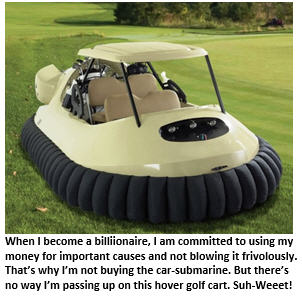 Oh, and my own wild animal park. Nothing too fancy. Just big enough for all my elephants, giraffes, zebras and lions to roam around in – oh and one of those cool safari lodges where your bed is under the stars, and you have Tiki torches – with armed guards to make sure no rhinos attack while you’re sleeping. Maybe I could hire some of those starving kids to guard the perimeter.

And once I have bought all of these necessities, nothing will keep me from placing a few calls to see if someone can airlift a couple crates of corn or millet or maybe some Huggies to those kids in Peru or Cambodia or West Virginia or wherever they are.

My point is, I care about the kids. Not sure which country’s kids at the moment, but it will come to me later. I just hope I win the next billion-dollar Powerball jackpot. Because I have some great ideas for how to use all that dough to buy some incredibly awesome toys – um, for the kids. It’s all about the kids.