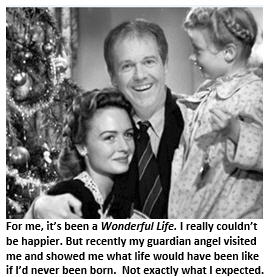 Tyrone: Well, because Danny never had that terrible fall, he never injured his leg. He played little league and went on to play high school ball, then college ball. He got so good the Chicago Cubs recruited him as a pitcher in 1977. He became a Major League all-star. He went on to earn millions. Technically, hundreds of millions. All those Nike endorsement deals added up.

Me: So exactly how is this supposed to make me feel better about my life, Mr. T.?

Tyrone: Like I said, he ended up playing for the Cubs in the 1980s. THE CHICAGO CUBS!! The worst team in baseball at that time. He never got to play in a World Series.

Me: Let me get out a Kleenex and wipe my eyes. I have to tell you, T-bone, if you’re trying to make me feel better about the impact my life has had on others, you kinda suck at this job. Surely there must be somebody out there who would have been worse off had I never been born.

Tyrone: Indeed there is. Take a look now. Who do you see?

Me: Well, that’s easy. It’s my wife. But she looks a lot younger – and am I mistaken or are her breasts bigger?

Me: She looks amazing. And that looks like an awfully expensive necklace she’s wearing.

Me: How can she afford that on our salary?

Tyrone: You mean on HER salary. You were never born, remember?

Me: So you’re saying she was successful.

Tyrone: If you call being commissioned to paint the official portraits of the Pope, Nelson Mandela and Princess Diana “successful.”

ME: Wait, Princess Diana? But didn’t she die in that car crash?

Tyrone: Turns out, she never went on that trip. She’s Queen of England now. Doing great things. Funny the ripple effects that can happen from someone never having been born.

Me: So let me get this straight. I killed Princess Diana??? Is that what you’re saying?

Tyrone: I never thought of it that way, but now that you mention it…

Me: Okay, I have to ask. Who’s that stud hanging all over my wife? He’s acting way too cozy.

Tyrone: Um (long pause), you’re not going to like my answer.

Me: Go ahead. Lay it on me. It can’t make me feel worse than I already do for having killed the future queen of England.

Me: That’s odd. Because that dude bears a striking resemblance to my wife’s favorite actor.

Tyrone: And who was your wife’s favorite actor?

Me: Why do you ask? And for what it’s worth, it was George Clooney.

Me: Excuse me? What are you saying? That my wife’s married to George Clooney?

Tyrone: ‘fraid, so, buddy. She got commissioned to do Clooney’s portrait when he was appointed US Ambassador to The United Nations. And well, paint strokes led to other types of strokes – if you know what I mean – wink, wink.

Me: Oh, so now you’re a comedian, eh, T-bird? Let me get this straight. Because I was never born, my wife goes out and cheats on me and marries George Frickin’ Clooney. Is that the picture?

Tyrone: Well, technically she wasn’t cheating. But if it will make you feel better, your wife is miserable being married to George. 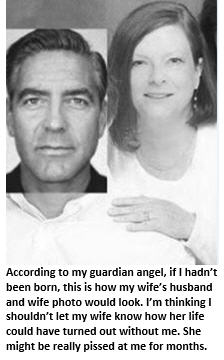 Me: Miserable? You expect me to believe that? Living in an ocean-side mansion in Malibu. A second home in Paris. Married to People Magazine’s Sexiest Man Alive. Vacationing on their private 80’ yacht. You might want to check the dictionary definition of the word “miserable.”

Tyrone: Aww, you got me. I can’t lie. After all, I’m an angel, and angels can’t lie. Actually, she is ecstatically happy. And so in love. He spoils her to no end. Like the private island he bought her –

Me: No need to elaborate. I get the picture.

Tyrone: But there are thousands of people who I believe it’s safe to say are less happy because your humor blog never existed. They never got to read any of your musings or laugh at your hilarious jokes or read this very post.

Me: Now you’re just patronizing me.

Tyrone: Actually, I have to correct myself slightly. Technically they never read your humor blog when you and your blog DID exist either. So it’s pretty much a wash.

Me: You’re batting a thousand, T-Rex. Is there anybody – ANYBODY AT ALL – who would have been worse off had I never been born?

Tyrone (pausing for an uncomfortably long time): Um, well…. Oh, yes. In fact there is. Remember your college girlfriend, Donna?

Me: My first true love? The first girl to break my heart? We dated for two years. Then she dumped me. She said something about how she never thought my jokes were funny. She said I was a bit of a nerd. Who’d she end up with, anyway?

Me: Are you frickin’ kidding me? You’re telling me that my college sweetheart, who thought I was too nerdy, married Bill Gates!!!??? She’d be worth billions by now. And that’s your example of someone who would have been worse off had I never existed? Precisely what is your point, Tyrone?

Tyrone: Well, for one thing, you wouldn’t have been around to take her to that party where she met Bill Gates.

Me: I see. No offense, Tyrone, but you’re not really very good at this “It’s a Wonderful Life” thing. I think I’ll switch back to my previous dream – the one in which I’m having steamy sex with Angelina Jolie. Thanks for a “Wonderful” visit. You did a helluva job showing me how the world would be worse off had I never existed. Bye now, guardian angel.

Tyrone: But, wait! Don’t you want to find out how your two daughters’ lives would have turned out?

Me: Am I going to be heartened to discover that without me, they would have lived lives of despair and loneliness because I was not there to adopt them as babies?

Tyrone: Um, well …. Actually, not quite. Turns out, they both got adopted into loving homes. Rachel went on to win the Nobel Prize for curing cancer. And Emmy launched Facebook before Zuckerberg ever came up with the idea. What amazing kids.

Me: Um, they sure were – I mean, are. I think I’ve heard enough, Tyrone. Sounds like everybody would have had a spectacularly wonderful life without me.

Tyrone: You’re missing my point, Tim. They never would have known you! And you would never have had the wonderful family and incredible friends that you have. Don’t you see? You really have had a wonderful life.

Me: You’re absolutely right, Tyrone. I really have had an incredibly wonderful life. Thank you for helping me see this. Goodnight, guardian angel.