How to Help Your Child With Their Science Fair Project 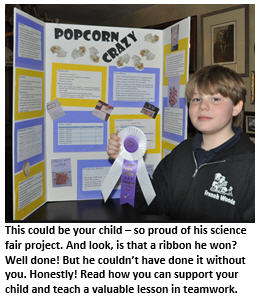 If you have kids, then by the time they reach middle school, it’s a certainty they’ll turn to their parents for help with their science fair project. In our family, they naturally turned to me because they respected my enormous wealth of scientific knowledge [after all, I’ve watched more than two episodes of Nova] – and not at all because my wife has told them “I’ve driven you to 600 soccer practices and 125 piano lessons over the past three years. It’s time your father got off the couch for once. Go ask him!”

Helping your child with his noble science fair project can be a wonderful bonding opportunity – parent and child working together to bring a complex endeavor from inception to completion. Remember, your role is merely to coach, not to take over the project. Use this chance to teach your child a life lesson in taking responsibility. Follow this simple seven-step roadmap, and before you know it, your little wunderkind might learn a lot more than just how many planets are in our solar system (I still say the answer is nine. Pluto rocks).

Kids are naturally competitive. They want to impress their teachers – and their parents. So don’t be surprised if your child’s concept for a project is overly ambitious. When he decides to build a nuclear particle accelerator using bicycle parts and silly putty, you may want to counsel him to scale back his plans to something more realistic – so he might actually complete his project during your lifetime.

Step 2: Remind your child of your role in this project.

Okay, so you took your kid to the movie, The Martian, and now he’s decided he’s going to build a rocket ship that can travel to Mars and back. Did you skip over Step 1 above – the part about choosing a project he can actually achieve? As you get started, remind your little rocket builder that this is his project, not yours. Insist he take the lead. Gently reassure him that you’ll be there every step of the way if he gets stuck.

Notice how he gets stuck as soon as he hands you the instruction sheet from his teacher, at which point he may say something like, “Dad, this looks really hard.” Don’t worry. This is an excellent opportunity to teach him the lessons of patience, self-reliance, taking a project from start to completion and going without texting for more than three minutes.

Step 3: Encourage your child when he gets stuck.

Don’t become concerned if your junior scientist encounters a few “asteroids” in his path. That’s perfectly normal. He may need a teensy bit of help to see the roadblock from a different perspective. Examples of where your child might run into difficulty include following instructions or taking his earbuds out so he can actually hear you as you start reading the instructions aloud. This is a great chance to model staying positive by complimenting him on his progress: “Hey, look at you, helping out by sharpening your #2 pencil. And thanks for taking time out from playing Angry Birds with Jason. Atta boy!”

Step 4: If he continues to be stuck, demonstrate a way forward.

At some point, your resident Einstein, while no doubt gifted, may need a little help to get this project back on track. After all, you only have one more week until the deadline, and so far your little astronaut’s biggest accomplishment has been holding a clipboard.

When you find that he’s struggling – say, he appears to have forgotten which end of a Phillips screwdriver to hold – you may need to jump in briefly for guidance purposes only. It is essential that you assemble only the first stage of his 15-foot tall booster rocket, so he gets the idea of how it’s done. Then step aside and let him take over on building the command module. 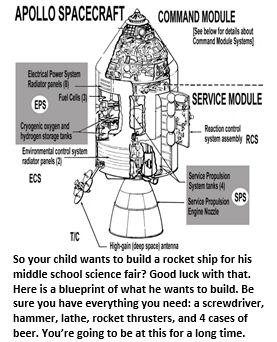 Step 5: Offer to help with the more difficult steps. Great job on assembling the booster rocket. I’ll bet you never imagined it would weigh over three tons, did you? Looks like you probably should have constructed it in the garage – or better yet in the gym at the school, as I have no idea how you’ll get it there. But hey, that’s how you learn.

I see that your little Wernher von Braun is not doing so well assembling the command module. He seems to think that the instrument panel goes outside the space ship, attached to the windshield wiper. You might want to give him a hand with that – and any remaining task that doesn’t involve signing his name to the poster describing the project. Be sure to let him attach the American flag to the top of the space ship so he can feel the pride of a job well done.

You may notice at this point that John Glenn Jr. is starting to fade. After all, it’s not easy sitting still and feigning paying attention for an entire weekend, watching your dad build a rocket ship for your science fair. Look for ways you can make the experience fun for both of you. Perhaps let him watch an educational film about space flight like Apollo 13, as you put on the finishing touches to the overhead escape hatch. On second thought, given your child’s score on his most recent science quiz, perhaps Muppets in Space is more his speed.

Step 7: Point the way to the finish line.

You guys are doing great together. What a fantastic team you make. But remember, you’re just the co-captain on this mission. Make sure your Captain Kirk takes control of the bridge and drives the project home. Let him experience the satisfaction as he takes a selfie in front of his impressive creation.

Congratulations to your child on a job well done. You must be so proud of his achievement. He just might take first prize. He sure deserves it!