What we WISH we could say to our kids 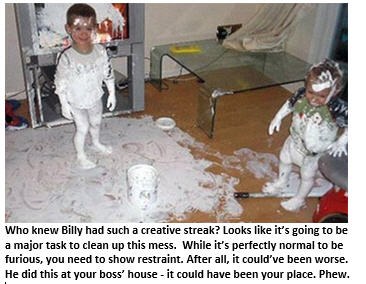 Years ago, I had this reckless notion that something was missing in my life which could only be filled by having kids. So we started a family – and got so much more: eight years of Raffi songs, 800 trips to sports practices (and the occasional trip to the ER), $6,000 in orthodontia bills, and a child-proofed house, every square inch of which perpetually resembled a FEMA disaster zone.

Don’t get me wrong – I love our daughters more than anything in the world – with the possible exception of bacon. But it didn’t take long to discover that despite the significant gap between my toddlers and me in earning potential, overall intelligence, and ability not to drool on everything with which I came into contact, I simply was no match for my kids. They routinely wore me out – usually by the time they dumped a bowl of Raisin Bran on each other – a daily 7am ritual.

As a parent of two boisterous young girls, I quickly came to two conclusions: First, the interior of the VCR makes an ideal place to hide daddy’s slice of apple pie; and second, being a parent was going to require Herculean levels of patience. Being a good parent means having the maturity to resist saying the first thing that pops into your prefrontal cortex when your eight-year-old microwaves your cell phone. You need to suppress the urge to blurt out, “Jesus Christ! What the hell were you thinking, spraying the cat with the purple paint, you little twerp?” Such an outburst could permanently damage your precious angel’s delicate self-esteem – much like my angel permanently damaged our precious leather couch with a stick figure etching of her daddy.

Shortly after our girls acquired rudimentary speech, I learned a valuable lesson: Never use foul language in front of young children. When my eldest was barely three, I caught her wielding my $500 Titleist driver into the trunk of our cherry tree, “just like George Washington, Daddy!” While she hadn’t yet mastered conjugating a sentence, she had, to my surprise, absolutely no difficulty reciting back to mommy the entirety of my panicked outburst – verbatim: “Mommy, Daddy said, ‘Holy shit. Look what you’ve done to my club!’ What does ‘shit’ mean, Mommy?” 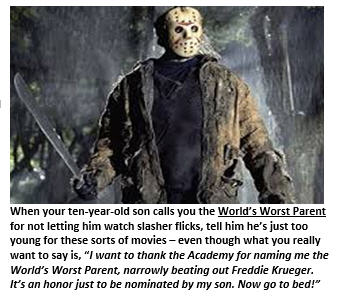 If you’re considering starting a family, my best advice is to discuss it with friends who have already chosen that path – and seriously rethink your impulsive decision. Why not pursue a far less expensive endeavor, like, say, purchasing your own Lear jet? But if you won’t listen to reason, then at least practice what you plan to say to your child before they begin their devious campaign to drive you insane. Let me help with a few suggestions:

When your two-year-old gleefully sheds her diapers and takes a dump on your white living room carpet, proudly remarking, “Look, Daddy, I go poop like a big girl” …

Consider saying this: Look at you acting like such a big girl. I’m proud of you. You only missed the potty by two rooms. You’re a good girl. Yes, you are.

Even though what you really want to say is this: Oh my F-@#*-ing G*d. You just destroyed our $500 carpet. You better find a good-paying job starting today, because the cost to replace this carpet is coming out of your pocket, missy. And enough with making the sad goo-goo eyes. Not working, kiddo.

Consider saying this: If you stop screaming and let go of your sister’s hair, then we will calmly discuss your proposal. Now eat your meatloaf and peas or else you can go to your room now without dinner.

Even though what you really want to say is this: Well, excuse me, your majesty. I had no idea that you had called for the chef to prepare your usual entrée of refined sugar and corn syrup. Please forgive the egregious error. I will have the chef summarily beheaded at dawn. Would you like some whipped cream and gummy bears as well? And what festive melody would you like the minstrel to play on his lute for his majesty’s amusement? I live to serve your every whim, sire.

When your eight-year-old child asks you, “Daddy, how come the moon doesn’t fall out of the sky?”, and no matter how many times you try to explain gravity and planetary physics, he keeps asking the same question over and over again for the next hour …

Consider saying this [to your spouse]: So, honey, how was your day?

Even though what you really want to say is this [to your child]: If you ask me ‘how come the moon doesn’t fall out of the sky’ one more time, I swear I am going to send you to the frickin’ moon on the next one-way space ship, where they will drop you off and you can ask the goddamned man on the moon yourself. But you might want to bring a sweater, bucko – since it’s minus 387 Fahrenheit there – Now just shut your pie hole, for once in your life. 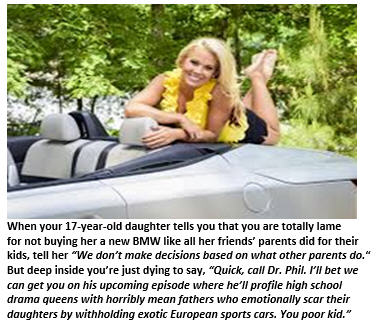 Consider saying this: I am deeply disappointed in you. There will be serious consequences for this violation of my trust. I need to sleep on it tonight so I can decide on the appropriate punishment. In the meantime, clean up this mess you made right now.

Even though what you really want to say is this: What the hell were you thinking? Oh right, you WEREN’T thinking. Because you’re an idiot. What exactly was your plan, Sherlock – setting up a keg and inviting strippers to jump out of a cake? Here’s a suggestion: The next time you decide to throw a beer party for your underage friends in my house, make sure to change the lock on the front door. That way, it will buy you just enough time to make your escape out the back and hop on a bus to Mexico before I break down the door and shove that keg up your ass and out your ear. FYI, you’re grounded until the return of Haley’s Comet.

So if you’re still contemplating starting a family, see what you have to look forward to? But honestly, give my suggestion about buying a Lear jet instead serious consideration. It is way cheaper in the long run.