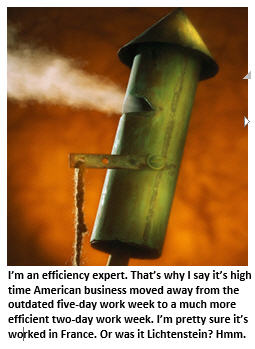 For several years, every November and December, I experienced three-day work weeks thanks to the Thanksgiving and Christmas holidays. Due to the shortened workweeks, I had to be extremely focused, making efficient use of my limited time those weeks. I cut way back the amount of time devoted to watching adorable cat videos on YouTube.

With only three days to get everything done, I dutifully avoided sending our my normal two dozen humor emails a day with links to things like hilarious parody music videos on the Twelve Days of Christmas. I discovered that I accomplished so much in these shortened work weeks that it got me to thinking: Imagine how much more efficient workers would all be if we all had a three-day work week.

There are many companies – and even a few cities (El Paso, TX, Melbourne, FL) and at least one state (Utah) that are currently experimenting with a four-day work week. Instead of five 8-hour days, their employees work four 10-hour days, and they really get a lot of things done in these ten-hour days…well, in the first 8 hours anyway. Polls of workers who have shifted to a four-day work schedule indicate that 85% prefer it to the previous five-day schedule and an overwhelming 99% prefer it to the seven-day 80-hour work week with no time off for Christmas.

The advantages of a four-day work week are obvious:

If you ask me, it just makes sense that working four longer days is much more efficient than five shorter days. But why stop there? By this logic, then why not three 13.33 hour days? Better still, why not two 20-hour work days? It works for medical doctors completing their residency and for college sophomores cramming for their Economics final, so why not for the rest of us?

Now I know what you’re thinking. Why not a one-day work week? You silly, there just aren’t enough hours – unless you’re working part-time. Then yeah, that could work just fine. Good suggestion.

And you might push back and protest “What about sleep deprivation? Do you want your surgeon working on you if they have already worked 18 hours?” or “What if the bus driver carrying your child to school was so tired from working a 20-hour day that he fell asleep at the wheel?” These are valid points, which is why I would only apply the two-day work week to any job I might conceivably be interested in doing. And I have absolutely no interest in becoming a surgeon or a school bus driver – nor for that matter, since we’re on the subject, a farmer, coal miner, used car salesperson or dental hygienist. In full disclosure, I’m not really inclined to accept any job that involves taking blood or stool samples, defusing IED’s or the routine use of tasers. But I digress. 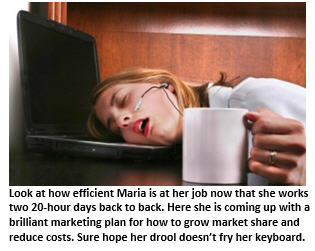 So think about it. Unless you’re an open heart surgeon who also drives a middle school bus route, your work week could begin, say on Monday at 6am and be over by say, Wednesday morning around 3am. No more thinking about work stuff for another five days. How awesome would that be? Think how rested and refreshed you’ll feel when you head back to work the following Monday morning after five days off, during which you were finally able to binge watch all five seasons of Breaking Bad.

Your entire family will be thrilled to have you around so much more, with the possible exception of your spouse and kids. But your Chocolate Lab, Tootles, will be ecstatic! Your cat, Freckles, won’t particularly care one way or another. Sorry.

For you men out there, there is one small possible downside to having all this extra “free time” on your hands with a two-day work week. Your wife may conclude that you have plenty of free time to step up to the plate more…. starting with taking Jake to the orthodontist, then driving Jessica to and from soccer practice. While you’re at it, could you be sure to get the groceries, take the car in – the transmission is running a little rough… Oh, and you might as well stop by the post office, the dry cleaners, the bank, and get more kitty litter while you’re at it. And could you please get the following 57 items from Costco… (The preceding product placement was paid for by Costco.)

…. Oh and don’t forget to find a baby sitter for Saturday night and help Megan with her report on the history of the spoon – it’s due tomorrow. When you have a minute, could you check out that clanking sound in the clothes dryer? You might need to take it in. Oh, it sure would be great if you could finally get around to raking the leaves like you said you would last fall. They won’t just rake themselves, ya’ know.

Yes, with all this extra time on your hands, you will have lots more time to take over countless chores and errands that you somehow were able to avoid back when you were slaving away five days a week at the office.….. On second thought, I think the five-day work week is fine just the way it is. A two-day work week? That has to be the stupidest idea I’ve ever heard.

I’ve got to get back to work. I’ve got a feeling today is the day I’ll break my record score of 212 in elf bowling. Wish me luck.