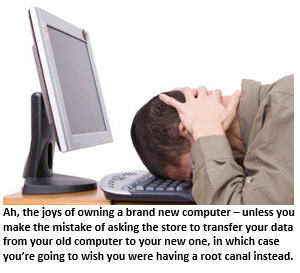 But this was entirely my fault. You see, when they told me they could transfer all my data for a fee of $150, I neglected to mention the desired destination of that transfer: my NEW computer. God only knows where they actually sent my precious data. My BEST guess? The new laptop of some other customer – who is now wondering what deviant dude saves photos of naked toddlers bathing.

So I called their toll-free tech support hot-line: 1-800-YUR-FUKD. After 45 minutes of listening to Muzak, I reached an agent named Becky, who told me it would be only another brief 45 minutes before “the next available tech support agent” could assist me. To my relief, she assured me that my satisfaction was their #1 priority – or maybe #2, right after putting all the phones on hold so they could watch Game of Thrones, season three, episode 7 – a real nail biter.

As I was on hold waiting for Game of Thrones to end, I was greeted every 30 seconds by a series of cheerful suggestions for how I could solve the problem they had created by visiting their website and checking out their FAQ section. There were also invitations to chat online with a live agent – which I’m now convinced was a trained monkey who has been taught how to copy and paste the following message: “I will be assisting you momentarily.” Apparently “momentarily” has a very different meaning in the world of tech support call centers from its meaning where I was raised.  Or maybe time just moves more slowly in India. 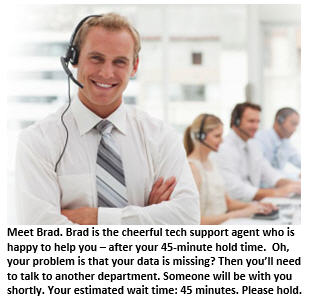 Once I finally got a hold of a Greek Squad agent – I think his name was Casey – but it could have been Tony – he politely informed me that 1) my satisfaction was his #1 priority and 2) as best as he could tell, the tech team at the store had royally fouled things up. I felt much better hearing Casey/Tony’s theory about what caused the problem, saying no less than eight times “I’m really not sure what they could have been thinking.” (I am not making this up.)

So Casey/Tony finally solved the problem and restored all my contacts and all my calendar items. Looked like clear sailing ahead.

And it absolutely was clear sailing – for about five minutes after I hung up from Casey/Tony.  All was fine, so long as I had no need for any of my 3,000 saved emails or any of the 250 blog posts I had written over the past six years – or as my wife would call it, “no great loss.” Somehow this Greek genius had deleted them all.

The next thing I knew, I was I was on the phone again, waiting for the next episode of Game of Thrones to end. But in less time than it takes to bake an apple pie from scratch, an agent came on the line to cheerfully tell me that wait times for tech support were now averaging over 60 minutes.

The subsequent two-hour wait gave me just enough time to vacuum the house, defrost the freezer, mow my lawn and still have time to do the Sunday New York Times crossword puzzle. When I finally reached a tech support agent named Luke, he politely informed me that 1) my satisfaction was his #1 priority and 2) as best as he could tell, Casey/Tony had really fouled things up. It took him over two hours – with me sitting on the phone – before he could finally restore all my missing data and get my computer working properly.

I estimate I wasted at least four hours on the phone with WORST BUY’s tech support plus another three hours sitting on hold. But it appears that FINALLY, my computer is working properly. Luke assured me that all my files should be saved and I should have no more problems whatsoever.

Um, I gotta go. Looks like I need to call WORST BUY again.