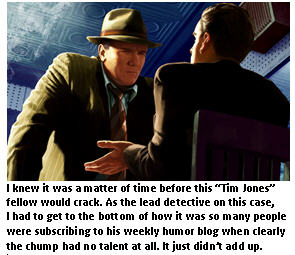 “So let me get this straight. You’re telling me that thousands of readers from all across the country willingly subscribe to your weekly humor blog? Is that your story? How? I want answers, and I want ‘em NOW,” I barked as I pounded my fist on the one-way mirror, behind which Lt. Jaworski was watching, no doubt taking notes on how he could steal this case from me. What a frickin’ snake, that Jaworski.

“I’m just as confused as you are, Sergeant Marlboro. Have you actually read any of my stuff?

“Sorry, Detective. I mean, I’m just as mystified as you are as to why anybody would read my weekly rants. Even my wife begged me to stop writing years ago, but I just can’t seem to stop myself. It’s a sickness.”

“Sickness, eh? Well, I’m sick of your lying to me, goddammit.” I glared at him, as he awkwardly shifted his legs on the rusty metal fold-out chair. I took another puff on my Camel filter and blew a charcoal wave of smoke in his face. “Sure. Whatever you say, pal. I got all night.”

Jones pleaded, “What are you charging me with, Marlboro? Is it a crime to write lame humor, officer?”

“The way you write, it sure as Hell is,” I growled back. “And for the last time, it’s Detective, you little weasel.” 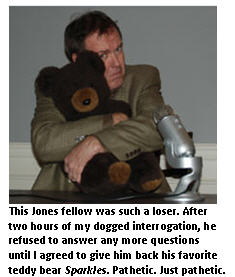 By now Jones was nervously twisting his wedding ring, no doubt coming to the realization that his humor writing was nothing short of criminal – or at the very least a misdemeanor. So how was it he got away with writing this crap for almost six years without being shut down by the Feds? I needed to crack this case and fast – Jaworski was ready to pounce.

But what was Jones’ angle? For the money? Hell, no. This dude wasn’t that clever. I could tell from the fact he wore white socks with his Teva sandals. Now, that’s a crime in itself!

Another hour crept by, like a filthy rat creeping around a dank, dark sewer for, well, about an hour. I started in on my second pack of Camels.  “Don’t you find it strange that so many people have tried to unsubscribe from your weekly tome only to keep getting your posts week after week?”

“Don’t get smart with me, chum,” I snarled. I wasn’t buying his ‘Mr. Innocent’ routine. So I grabbed a copy of his latest piece and began to read. What I read next confounded me:

“It was another dark and stormy night in Seattle. The clock on the wall read 3:04 am. And there Tim Jones sat – if that’s even his real name – sticking to his story that all he could be guilty of might be bad writing. But there was a problem. The guy’s story just didn’t add up.”

I had this sudden eerie sense of déjà vu. Then I looked back up at the top of this page and saw. He was stealing my story for his blog, the little conniving bastard.

Jones continued to fidget with his Batman secret decoder ring – the one he claimed he got at the dentist last week for having no cavities. “Like I’ve told you five times, Detective Marlboro, I have no idea why you’re keeping me here. I just like to write. Is it my fault that I’m not very good at it? Who am I hurting?”

“Me for one, you little putz,” I shouted. “Reading your crap is like being forced to drink my own urine.”

“Worse. Ain’t you got no compassion for the innocent kids who might stumble upon your blog?”

“Actually, the expression is, “Have you no compassion. ‘Ain’t you got no’ is not a grammatical – “

“Shut the hell up. I don’t give a crap,” I told him. Then he started rambling about his favorite post topics – something about  teaching his kids how to drive and a message from your cat. Even one on the history of the apology.

That chump owes me a frickin ’apology – for wasting the past five goddamn hours of my life. He kept droning on about his favorite articles. “Stop,” I screamed. “Not another word. Just shut your trap!” This guy was really getting on my nerves. He had to be lying. Nobody could possibly write such inane drivel week after week, year after year and not go insane. And who the freak wears shorts on a rainy night in March? What a loser.

I decided to read a couple of his posts just to be sure I wasn’t missing an important clue. I could barely stomach the first piece called Lessons in Bonding. He was killing me with this stream-of-consciousness bull crap. I looked away from his annoyingly chirpy grin. Dawn was slithering in like… like something that slithers… in the dawn.

The drivel pounding on my brain was as unrelenting as the drizzle pounding on the roof. I looked at his Casio. It blinked 6:47am. We’d been at this for over six hours. But instead of cracking, he just kept on reciting an endless list of his favorite posts – from always lying to your kids, to his sports-impaired wife. I was on my 7th cup of lukewarm Joe, and this goober was still rambling mindlessly on. One of his posts even warned me to not to let my dishwasher destroy my marriage. The guy was a numskull, though on that last one, he had a point.

I finally decided that as criminal as his humor writing was, no one was more a victim of his crimes against humanity than himself. I put out my last Camel, blew the smoke in his face and sneered at this turkey. “Get outta here, ya’ punk. I guess I can’t charge you with anything – yet. And maybe I can’t stop you from writing this crap. But for the love of Pete, please do me one favor.”

“Get yourself a goddamn editor. This week’s piece is way too long!”

I thought that was the end of this story. But the very next week, I got an email inviting me to check out his latest blog piece – called The Interrogation. Sounded fishy. Some twisted fiend must have added me to Jones’ humor blog subscriber list. And I’m pretty sure I know the slime dog who would have signed me up. Goddamn Lieutenant Jaworski. That dirty rotten scoundrel.