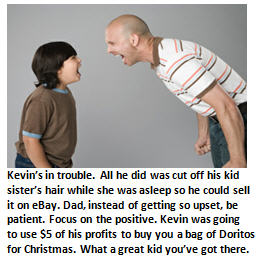 If there is one thing I’ve learned as a parent, it’s that in the end, your kids will crush your dreams, ignore your advice, join a biker gang, and blame you for everything.

But if there is a second thing I’ve learned, it’s that you need to be positive. As you know, outside of my immediate family, I am considered a parenting expert. My latest book, A Positive Parent’s Guide to Loving Your Child, even if They’re an Evil, Twisted, Unmotivated, Narcissistic Demon Seed Hellion Who Will Never Amount to Anything is helping millions of frustrated parents around the globe deal with their challenging child. The key? Remain positive at all times.

This week, I dip into Dr. Tim’s Mailbag, to share how you can successfully apply my powerful patent-pending positive parenting process to help your own challenging child blossom to almost one quarter of their God-given potential.

I’m a single mother of a challenging 16-year-old named Melanie. Lately, Melanie has morphed from a loving, conscientious student into an impossible-to-manage, moody high school drama queen. I can live with her 11 body piercings – even her 25-inch boa constrictor tattoo that slithers up her thigh. But my former straight-A student’s grades have plummeted.

All she does anymore is bitch about me on Facebook. Thanks to her boyfriend named Chainsaw, she now plans to become a circus roadie and insists I call her by her circus name, Viper. What can I do to steer Viper back on track?

Signed, At my wits’ end in Wilton 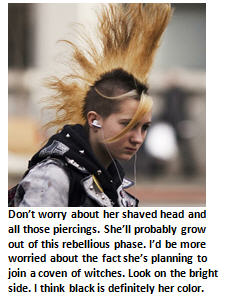 I imagine you’re rather anxious about your precious Vipemeister’s newfound identify and career aspirations to be a carny. But it’s important to remain calm and positive. While she may currently despise you as much as I despise Brussels sprouts, before long, she will probably bear Chainsaw’s love child and settle down as a mother herself – most likely in some flea-bitten Mexican border town, cohabitating in a circus tent with a 57-year-old alcoholic clown named Chuckles, once Chainsaw dumps her for Sword-Swallower Girl.

Then she will have plenty of time to appreciate how great a mom you were and realize in retrospect that you were right about the danger of doing so many drugs. She just needs some time to find herself. Once she is out of prison for dealing, your little angel will come hitchhiking back to the nest. Give her a little time, and by a little time I mean 15 years. As for your concerns about her addiction to Facebook, sadly there is no known cure.

My nine-year-old boy Travis has serious anger management issues. He’s been sent to the principal’s office seven times in the past four months, most recently for shooting the teacher’s pet hamster, Chewbacca, the length of the classroom using his homemade slingshot. Yesterday, while pitching in a little league game, he deliberately beaned four batters – two of them were on his own team.

He seems obsessed with punching things and shouting about how I’m the worst father in the world because I won’t let him watch the Friday the 13th marathon on the Blood ‘n Gore channel. How can I help him deal with his anger issues?

Signed, Losing it in Las Vegas 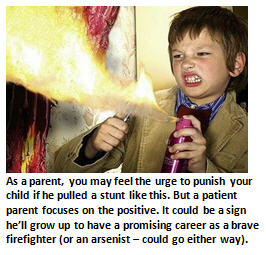 Wow, I can clearly sense your understandable pride in your son’s throwing accuracy. He shows lots of potential to go far as a pitcher. Be sure to encourage that talent. And he constructed that slingshot all by himself? Sounds like quite the young civil engineer in the making. I would not be too concerned about his temper tantrums. This is very common for boys of his age who possess latent sociopathic tendencies.

Given his love of animals and a passion for shooting things across large venues, perhaps you should introduce Travis to Viper. I’ll bet she can get him a job in the circus getting shot out of a cannon. Stay positive. Frankly, I see nothing wrong with his obsession for slasher movies. He will learn valuable insights about human anatomy and the cardiovascular system. That could come in handy someday in a possible future career as an EMT – or a psychopath.

My six-year-old boy Ernest has taken to flushing things down the toilet. It started innocently enough, flushing marshmallows and such. But lately he’s been taking this to alarming levels. Recently he flushed my wife’s engagement ring down the toilet, and last week, he flushed my brand new iPod.

I’m starting to get nervous. Nobody has seen Ernest’s pet turtle, Bubbles, anywhere since yesterday. Should I be worried?

Signed, Worried in Fort Worth

First of all, what possessed you to name your son Ernest? No wonder he has issues. But don’t worry. Stay calm. Remain positive. Be sure to show support and encouragement for his fascination with plunging things down the toilet. This could be a sign he has a latent interest in a career in plumbing. Plumbers make a very good income – especially the one who charged me for repairs he didn’t actually do. Also, I would commend your son on his efforts to give Bubbles his freedom. It’s just like that film, Free Willy, and I don’t mind saying I cried at the end, when Willy was set free. By now, I am sure Bubbles is happily swimming with the fishes.

Well, that’s all the time I have today. My wife just brought to my attention that our teenage daughter has put our three cats up for sale on eBay, posting, Buy Buttons and Patches for $100 and we’ll throw in Whiskers for free. She already has a buyer. I must compliment her on her concise marketing ad copy. I see a successful career in advertising in that kid’s future. I’m quite positive.