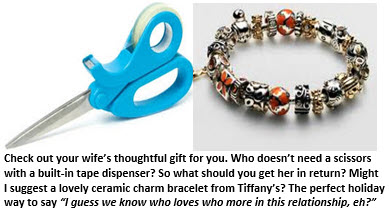 There are a few things you need to remember when trying to capture just the right holiday spirit of guilt. For example, give a gift to someone you’re fairly certain had no intention of buying you one – your boss at work, your sister-in-law’s husband, the kid next door who does a crappy job of shoveling your driveway and who probably stole your daughter’s bicycle – you know, the people you care about enough to make feel guilty. 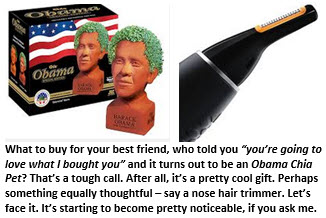 By selecting just the right gift, you can ensure the recipient will feel obligated to reciprocate – in the hope that you won’t figure out that they never intended to buy you a gift. So, be sure to present your present just before Christmas, leaving them no time to shop. If they reciprocate with a $5 Starbucks gift card – you’ll know that they bought it at the drive-through on the way home from work Christmas Eve, and you win.

Sometimes, despite your best effort at one-upping them with your unexpected thoughtfulness, they will have already bought you a gift. But don’t be duped by the friend who tells you, “You’re gonna love what I bought you.” It’s a trap. They most likely bought you salt and pepper shakers shaped like cactuses. Trust me, anything you buy from the clearance rack will be classier than the gift they got you. But perhaps I’m wrong. Hope you enjoy the stale fruitcake they grabbed in the checkout aisle at Target.

What about the people who are who are financially well off but simply too cheap to spend money on presents, preferring the “personal gesture” of a handmade gift? Isn’t that still the spirit of Christmas? Um, sure. They will usually throw in a comment like, “Oh, it’s really nothing special.” I can assure you, when they say this, they’re telling the God’s honest truth. On a completely unrelated note, I want to send this shout out to my sister, Betsy. I really love the macramé Kermit the Frog Christmas ornament you handmade me. It will go at the top of the tree.

When it comes to the spirit of Christmas, I need to say a word about thank-you cards. First of all, don’t expect any for the thoughtful gifts you gave. People stopped writing thank-you cards in 1995 – just after Father’s Day. If you’re lucky, you might get a Facebook message saying “Hey, Thx!”  It’s important to make clear who the better person is, and that means you should write a plausibly sincere thank-you note – or at least, a thank-you text. After all, someone apparently went to a lot of effort to select just the perfect gift for you, by which of course, I’m referring to that slightly stained coffee mug they re-gifted with the hilarious phrase “I hate Mondays.”

I have made it easy for you to send a thoughtful thank-you note which almost appears to be straight from the heart. Just use the following fill-in-the-blank letter.

Thank you so much for your most thoughtful gift. It is: 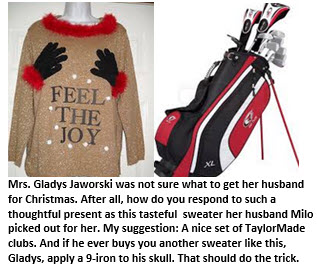 I know the perfect place to:

Remember, the real spirit of Christmas is not about honoring the birth of baby Jesus. It’s not about goodwill toward men. That’s so 19th century, Nowadays, it’s all about the gifts. But you don’t need to get the perfect gift for the people on your holiday list. You just need to make sure your gift is better than whatever they bought you.

You may not get that massage chair from your wife that you have been hinting about for the past six months. But at least you’ll have the holiday satisfaction of knowing that when she opens up that pearl necklace you bought her, she’s going to feel pretty darn embarrassed about the cheese grater she got you. And isn’t that what the holiday spirit is all about?