The secret to taking the stress out of moving 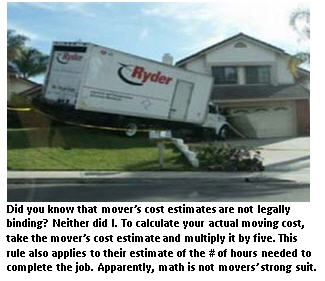 My wife and I recently decided to move. Of course, when I say that, I mean that my wife decided we would move.  As her husband, she did allow me some say in the matter. I had the option of coming along or staying behind in an empty house soon to be occupied by complete strangers.

I considered the pros and cons with manly logic, and in the end concluded that following my wife’s lead was probably the better option. Besides, that way I got to keep the giant flat screen TV.

The process of moving can be stressful. Just thinking about the endless list of tasks can feel overwhelming. If you’re planning to move any time soon, follow my advice and take the stress out of your move.

Step One: CHANGE YOUR MIND ABOUT MOVING. Seriously, what’s so bad about your current place anyway? Oh, sure, so your neighbors’ 17 pit bulls can get a bit annoying when they all bark at the top of their lungs every time a car drives by. Hello! – ear plugs?! But if you don’t want to heed my advice about not moving, I understand. My wife ignored it, too.

Step Two: Know something about where you’re moving BEFORE you move. Before you sign 127 arcane legal documents committing you to the purchase of your new home on penalty of forfeiture of your custodial rights for breach of contract, make sure you know something about where you’re going to be living. Turns out the place my wife picked out is just over an hour away from my office – so long as I plan on driving to my office between 1am and 3am Sunday morning. When my boss unreasonably demands I be at work on a weekday somewhere between 9 and 5, my travel time expands slightly – to approximately 4 hours and 28 minutes – shave 3 minutes if I make the light at NE 196th Street. 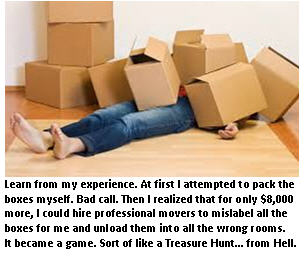 Step Three: Get rid of the clutter BEFORE you move. We all tend to collect stuff over the years – our grandmother’s engagement ring, military discharge records, actual photographs of people we care about – you know, stuff we really don’t need. There is no better time to get rid of that clutter than before you move. I’m not suggesting you sell your collection of life-size inflatable Simpson character action figures. Are you kidding me? Krusty the Clown alone could be worth a fortune someday.

Nor would I suggest you give away your record collection from the 1970s (including every Neil Diamond vinyl album ever recorded). Never mind that these records are unplayable ever since your kids used them to play Frisbee with your dog. For God’s sake, these are priceless heirlooms for your grandkids.

But does your wife really need all those shoes and scarves and her car? Does she really need her silly vacuum cleaner that you have never once personally used? I think not.

Step Four: Hire a reputable moving company. Don’t try to move your stuff on your own. You’ll probably end up damaging your antique Grandfather clock beyond repair. Why not hire professional movers to damage it for you? And here’s a helpful hint: When the mover’s ad says, “Don’t ask why we’re so cheap. Ask why the other guys are so expensive,” you still might actually want to ask them why they’re so cheap. Just trust me on this.

Step Five: Have a plan for where things will go BEFORE you move. If you don’t, you’re going to end up having to move heavy furniture around again and again to make things fit. We didn’t follow this step. As a result, my wife decided the perfect spot for our 350-pound sleeper sofa was on the west wall of the living room… on second thought, try the north wall…mmm…no, much better in the basement rec room – down two flights of stairs.

Step Six: Don’t clutter up your new house. Congratulations on an outstanding job in Step Three: de-cluttering your old house before the move.  Now, it’s important to resist the temptation to undo all your great work by acquiring a bunch of new stuff for the new place that you really don’t need nor can afford – remember your new mortgage. 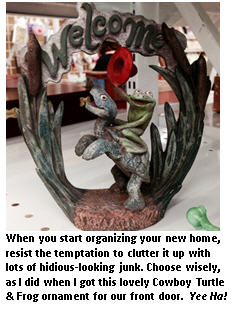 The key in this step is to show fiscal restraint. Take the following hypothetical example. Let’s say your wife thinks the new house would be more perfect if we, I mean, if you replaced the hallway chandelier, and put a fence in the backyard, and bought a gas grill for entertaining, and got an outdoor heater so you could enjoy your patio all year round, even when it was minus five outside. Careful. This could get expen$ive.

And imagine in this purely hypothetical scenario that your wife concludes that basement rec room would look homier if you ripped out the carpeting and put in a laminate floor, with a lovely 12’ x 16’ area rug. She might even suggest jettisoning the old perfectly adequate guest bedroom furniture set for a new more “contemporary” five-piece set. She might hypothetically even go so far as to suggest replacing all the toilets and sinks because “brass fixtures are so 1990’s-looking.”  Resist your temptation to inquire sarcastically whether she would like you to install an elevator for convenient access from her side of the bed down to the kitchen.

In the end, you need to draw the line somewhere. You can’t get everything on your wish list. And in the above hypothetical, your wife may have decided to draw the line when you asked about getting a vintage pinball machine for your man cave. Hypothetically speaking, of course.

So take my advice. The next time you’re planning on moving, get organized, remove the clutter, hire professional movers and have a plan for where things should go. It just might save you a ton of worry and stress – not to mention your marriage.

I must wrap up. My wife convinced me that we needed a fire pit for the back yard. So, I dutifully hauled 150 bricks to the perfect spot, assembled them in an art décor pattern, laid a slate hearth around it, and Voila!  “What do ya’ think, Dear?”  To which my wife replied, “Hmmm…I think it really needs to be 10 feet to the left.”  I’d better get on it. As she so wisely pointed out, those fire pit bricks won’t move themselves.