When it came to the journey of parenthood, I took a guilt trip 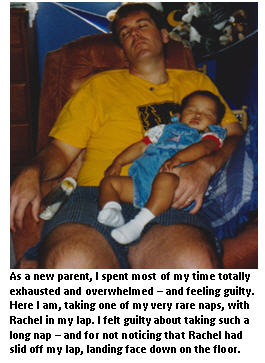 I have a confession to make. While technically speaking, I was raised in a Presbyterian household, I am sure that my parents secretly must have been practicing Catholics. Because for my entire adult life, no matter how hard I tried, I never felt my efforts were good enough. I’ve always felt guilty. Especially when it comes to parenting.

When our two girls were toddlers, I mainly swung between three emotional states: totally overwhelmed, utterly exhausted and constantly feeling guilty. That guilt was usually caused by my feeling so overwhelmed and exhausted.  When I became so sleep-deprived that I simply had to take a nap, I felt guilty for napping. I mean, a good dad would surely tough it out and watch a Sponge Bob video with the kids – for the 475th time. What kind of dad was I! For shame.

I felt guilty about my job in a dot-com start-up where for years I routinely worked 75-hour weeks. For some periods, I was essentially an absentee parent until the weekend arrived. And on those rare occasions when I was able to leave work before 6pm, I felt guilty because all the other managers (who were all 15 years younger, single and child-free) would still be there well past 8pm.

I felt guilty that my wife unfairly bore the burden of most of the household chores, not to mention the 4am feedings and diaper-changes. And by the time I finally got around to pulling my share of changing our girls’ diapers, I felt guilty that it took me so long to pitch in. I suspect that on some level our girls probably resented the delay in my efforts, too, especially because they were seven and six years old by that time.

A few years later, I quit the stressful world of internet start-ups. I decided to scale back my work hours so I could spend more time with our kids. Then I felt guilty that I was earning about 40% less than before, and as a result, vacations to Hawaii were replaced by long weekends camping in rain-soaked tents. I never really liked camping as much as my wife did, which of course, is another thing I felt guilty about.

When I was eventually able to spend more time with my young, impressionable daughters, I felt guilty for raising my voice in frustration too many times. Why couldn’t I laugh at their daily attempts to destroy everything of value in our home? Like the time I discovered they had hidden my cheeseburger in the VCR? Why couldn’t I just go with the flow and see the humor when they conducted an impromptu science experiment to test how well hamsters swim … in the toilet… just before they flushed… We miss you, Bonkers. God rest your furry little soul.

I felt guilty for all the times my angel monsters, as I called them back then, had “owies” that I could not make go away. As they grew and their injuries became more serious, I felt guilty that I could not stop the genuine pain of a gushing wound or remove the fear my daughter must have felt being wheeled into the operating room for foot surgery, particularly because it was her arm that was broken.

I felt guilty all the times I said “No” to my elder daughter’s requests for ice cream on the way home from her soccer games. In retrospect, I probably should not have eaten so many triple-scoop chocolate chip cookie dough ice cream cones in front of her in the car, but what dad can say No to a chocolate-dipped waffle cone? Not me, that’s for sure. Bad dad. I’m a bad dad.

When our girls became teenagers, I felt guilty when I snapped at them for things that most teenagers do, like lying to my face about where they were till 2am in the morning – which in fairness, they only did whenever I would ask them this question. I wish I had not raised my voice in anger when my older daughter totaled the rear end of my new car, along with our garage door, which she failed to notice was still closed because she was busy putting on her lipstick – while driving 20 mph – in reverse. Why didn’t I stay calm? 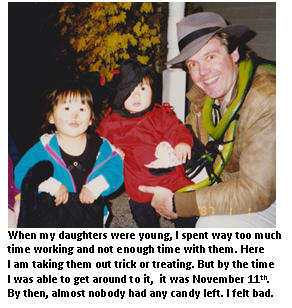 I remember feeling guilty when my younger daughter told me in 11th grade that “You are the worst dad in the world” (a direct quote) because apparently she’d concluded she was the only kid whose father had not bought their daughter a car for getting a 2.0 average on their report card. I was so mean.

Now that my girls are in college, I feel guilty that I did not cover the complete cost of their college education. My wife and I decided we wanted them to contribute to the cost, hoping they might learn a lesson in self-reliance. When they came home from college this summer, I felt guilty when I was mowing the lawn instead of hanging with them, even though I’m pretty sure they both much preferred that I kept mowing the lawn so that I wouldn’t ask if I could hang with them.

Our girls are almost grownups now. And it amazes me how quickly they’ve transformed from helpless, snot-covered toddlers with poop-filled diapers into self-reliant, self-confident young women intent on charting their own journeys through life. It seems now like it all happened so quickly – barely longer than the time it takes a child to accidentally set the kitchen on fire with her Easy-Bake oven.

As I look back, I feel guilty for having not spent more time with my girls. For not reading them The Very Hungry Caterpillar more often when they were five years old. For not telling them every single night, as I tucked them into bed and kissed them on the forehead, that I loved them to the universe and back. I feel guilty for not letting them know that I wished I could wipe away all their innocent tears with the touch of my kiss.

But most of all, I feel guilty that I failed to teach either of my daughters how to throw a football or how to bluff in stud poker. For that, I am deeply, deeply sorry.

That’s the view from the bleachers. Perhaps I’m off base. And for that, I feel guilty.