A Survival Guide for coping with air travel 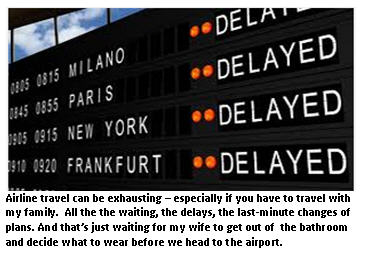 When Orville Wright first took flight over the beaches of Kitty Hawk, NC in 1903, he couldn’t have imagined that a century later, millions of people the world over would be getting into shouting matches with ticket agents, security screeners and baggage handlers over the nearly universal frustration caused by his invention. Thanks for the 12-inch gash in the side of my Louis Vuitton suitcase, Orville.

Singapore, New Delhi, and Buenos Aires are just a few of the famous world cities I will probably never get to visit because I refuse to put up with the headaches required to fly there. Also because, like most Americans, I’m not sure exactly where those cities are on a map. (I think New Delhi might be in Belgium.)

But sometimes air travel is unavoidable. If you simply must book a flight, here are a few helpful tips to reduce your stress level. These just might help you resist your urge to strangle the Delta Airlines ticket agent in Concourse C.

The first rule of air travel is simple: Don’t fly if you can possibly avoid it. But if you absolutely must fly, for example, to attend a family reunion, I recommend Qantas, the official airline of Australia. The last time Qantas had a fatality was in 1951. Of course, if your family reunion is in say, Chicago, you may need to make a couple connections through Sydney, Tokyo and New York. But you will arrive there safely, albeit two days later than the rest of your family, who opted for the nonstop on United.

Packing for your trip

I recommend packing light, so that you can fit everything into a carry-on and avoid the delay of waiting for your luggage at baggage claim on your arrival. It may force you to make some difficult decisions – like which to leave home: your sun lamp or your snow cone machine. Hard choices, I know.

If packing for a longer trip, a carry-on might not always be an option. You may need a larger suitcase. By FAA guidelines, your luggage can only be one of five colors: black, grey, blackish grey, greyish black or navy blue. It’s easy to mistake your bag for someone else’s, so make sure it stands out by attaching a brightly colored neon orange strap securely to the handle. Once the luggage comes down the carousel, your bag will easy to spot. Yours will be the one missing the brightly colored neon orange strap – as well as its handle. 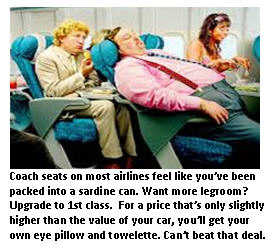 For many of us, the most exhausting part of air travel is waiting in all those long lines. When going through TSA Security, you will usually have several lines to choose from. It’s important to know which is the slowest. Here’s a simple rule of thumb: The slowest line will be whichever one you decided to get in. It’s an immutable law of airline travel.

Your line will inevitably be the one stalled by the guy who barely speaks English embroiled in a twenty-minute heated debate with the TSA agent (who also barely speaks English) arguing that the army surplus bowie knife he tried to sneak through is a gift for his seven-year-old niece. So just accept your fate and just pick a random line. Then start taking off your shoes, socks, belt, overcoat, shirt, slacks, and underwear for the TSA screener. But leave your glasses on – unless they’re night vision goggles.

As you board the plane, it’s important to be patient. The time it takes to reach your seat will vary between ten minutes and a week-and-a-half. The delay is typically caused by some 350-pound dude in camo pants and mullet haircut who will spend 15 minutes trying unsuccessfully to cram a carry-on the size of a small bison into the overhead rack.

To get a good seat, you need to book far in advance. But because you foolishly booked only 11 months before your departure date, congratulations, you got the last row on the plane. If your luck is like mine, you’ll be seated in a middle seat right in front of the restroom, between that same 350-pound mullet head in camo pants and a 21-year-old first-time mom with her five-month-old baby on her lap. Your best bet is to get heavily sedated. I recommend taking four times the recommended dose of Ambien, chasing it with three shots of Tequila, and reclining your seat the full 1&1/4 inches it will go back. And just pray you fall unconscious before the baby throws up on your lap.

Retrieving your luggage at baggage claim 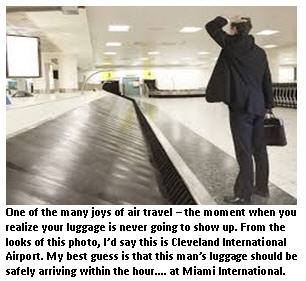 Upon arrival, head directly to baggage claim to collect your luggage. Notice how it’s been an hour and now the only bag revolving around the carousel is a black bag with a brightly colored neon orange strap – which oddly enough is not your bag. At this point, the proper course of action is to spew a series of loud obscenities interspersed with the name of whatever airline you swear you will never fly again.

Go to the lost luggage desk, where you will look for the customer service agent. Notice the sign on the counter that reads “On break. Back in one hour.” Eventually he will return. You will quickly notice the irony that despite having the title of customer service agent, he actually has no idea what the words “customer” or “service” mean. He will display as much genuine concern for locating your lost luggage as he has about Norwegian currency fluctuations.

You will eventually be informed that your luggage, which was supposed to arrive in Savannah, GA (airport code SAV) was misrouted to an airport with a similar airport code – Savoonga, Alaska (airport code SVA). Be patient. There is a better than 30% chance that the airline will quickly discover their error and get your luggage on the next plane headed east…. this time, to Shreveport, Louisiana (airport code SHV).

From there it will be re-routed again to its proper destination – approximately four hours after the scheduled departure time for your flight home. But don’t worry. Your flight home will be delayed by nine hours due to a mechanical malfunction in your plane’s main jet engine, which has failed for reasons nobody can figure out. So your luggage just might make your flight.

If all of this still sounds like a bit too much excitement, there is one other way to take the hassle out of flying. Next time, take the train.