Welcome to cricket. It’s a lot like baseball, only even more boring. 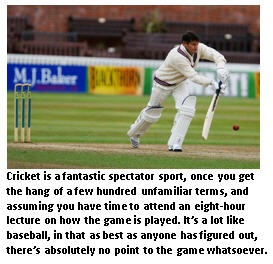 Great news, everybody. ESPN just announced it’s now broadcasting coverage of cricket. No, I’m not talking about televising small insects chewing through leaves – although granted, for many people, that might represent a more appealing TV-viewing option. I’m talking about the sport of cricket. If you’re someone who finds bowling on TV too exciting, or if you’re looking for an inexpensive way to enter into a self-induced coma, cricket could be just your ticket.

I’m not exactly sure why ESPN decided to start covering cricket. Perhaps ESPN’s International-Sports-Nobody-Gives-a-Rat’s-Ass-About Channel wasn’t able to get the programming rights for Equestrian Dressage. Or perhaps it came down to making a difficult choice between televising cricket versus broadcasting five hours of dead air.

Cricket is a sport that has been around for centuries. According to legend, it was first played during the early Pleistocene Era, in a match pitting the Leicester Clubbers against the always feisty Sussex Wooly Mammoths. The point is, it’s a very old game. Cricket is a lot like baseball – just slower-paced and without gloves or bases or David Ortiz Bobble Head Night or any coherent explanation for what is going on out there. Like baseball, it has a pitcher (which they call a bowler) and a batter (called a batsman). And like baseball, the main objective for most fans watching the game is to get as drunk as possible in order to keep their mind off the fact that the game in front of them is mind-numbingly dull.

Sadly, most Americans have never even seen a game of cricket. So let me take the next 46 pages to explain briefly how the sport works. The object of the game is simple: score more runs than the opposing team. To do so, the team’s batsman must leg out to the other end of the pitch and back and, of course, avoid letting the bowler strike the wicket causing the bails atop the stumps to fall.  The batsman ideally wants to hit the ball between the mid-off and the mid-on. A well struck ball might even make it past the long-off. Experienced batsmen wait patiently for the bowler to throw a belter or perhaps a full toss, which he can often successfully hit into a strong grubber, which, as you can imagine, is almost impossible to plumb.

With me so far? 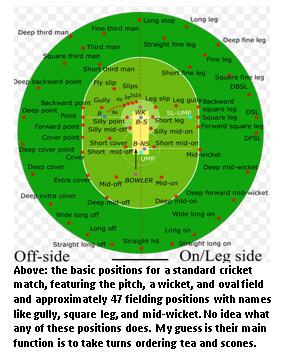 When the bowler has completed six bowls, this constitutes one over. And a new bowler begins at the opposite end of the pitch, at which time the roles of striker and non-striker can swap. If, while running multiple runs, a batsman does not touch the ground beyond the popping crease before he returns for the next run, then the umpire at that end will signal one short, and the number of runs scored is reduced by one. Two of the most important fielding positions in your standard ring field are the gully and the leg square because….. blah blah blah… This is killing me. I’m sure by now your eyes have completely glazed over, so it really doesn’t matter what I write in this space, does it?  Hey, did I ever deposit that check at the bank? And I wonder what that rattling sound is when I start the car. Note to self: Don’t forget to get groceries for our dinner party tonight. I guess I should probably get back to the point of this piece. It looks like you’re about to wake up from your nap.

There are several common misconceptions about cricket. For example:

Reality: They sometimes wear beige or cream-colored V-neck sweaters and sometimes also don a snappy cap featuring the coat of arms of the House of Gloucestershire or perhaps Kent.

Reality: It only feels like that long while you’re watching it. In fact, the average match is typically over in less than three days. It only lasts up to seven if they go into sudden death overtime.

Myth: The best players in the world are from India and Pakistan. They play cricket because they suck at every other sport.

Reality: To say that these two nations suck at every other sport is a ridiculous overstatement. On occasion, they’ve been known to hold their own in lawn bowling.

For the newcomer to this great sport, let me offer a few suggestions to help you enjoy watching cricket:

And now that I can see you’ve been bitten by Cricket Fever, here are some breaking scores: 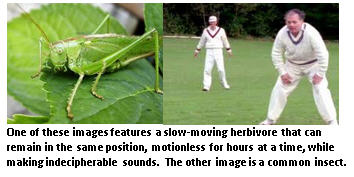 Cricket is a great sport, once you get in the right frame of mind, which usually only requires about three fifths of scotch. But if cricket is a bit too fast-paced for your viewing preference, switch over to ESPN-47 for their newest programming enticement: 24/7 coverage of chess. This weekend they’re showing a Chess Master Marathon, featuring wall-to-wall coverage of classic chess moves. Personally, I can’t wait till the segment on how to use the Two Knights Variation to outmaneuver the Hungarian Defense. Talk about spellbinding television.