When it comes to our kids, winning isn’t everything. Whining is….. 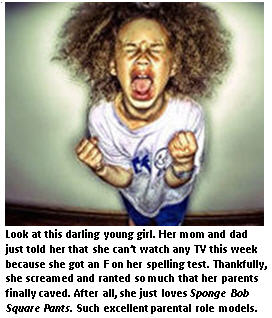 For too long, parents have been pushing their kids way too hard by doing outrageous things like telling them they need to get good grades if they want to get into college or harping on them relentlessly to practice piano for 30 minutes a week if they want to improve their skills. . Those parents are monsters!

When I was a kid playing on various sports teams, year after year, the ruthless message drilled into me was that if you want to win, you have to try hard. And maybe even practice. I internalized this misguided achievement message at an early age. Little did I realize the long-term crippling effect caused by the constant parental pressure to “do your best” as a child. Years later, the damage is evident, as I now have a good-paying job and live in a lovely home in a safe neighborhood that has excellent schools with teachers and coaches who push my kids to do their best. When will this vicious cycle of achievement end?

I have been as guilty as any parent, always sending the overbearing message to my daughters that if they want to get into a competitive college they might consider putting down their cell phone for two minutes and perhaps studying for tomorrow’s final exam.  In hindsight, I now realize that all this harsh talk about doing their best and applying themselves was actually undermining my kids’ fragile sense of entitlement.

Finally, a sports league in Canada has gotten its priorities about kids and “winning” figured out. Recently, the Gloucester Dragons Recreational Soccer league of Ottawa, Canada came up with a new rule designed to protect children from the emotional scars of losing in sports. Their new rule? If a team wins a game by more than five goals, that team loses by default. The rule was designed to prevent blowout victories and to encourage good sportsmanship. Hats off to you, Gloucester Dragons Soccer League. Well done. 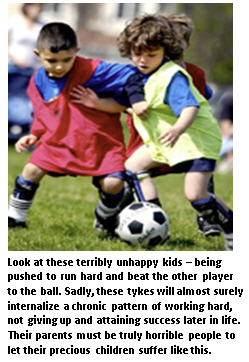 The results so far have been impressive. Now, whenever a team goes up by five goals, their players usually stop playing, walk off the field, and head over to the playground to climb on the monkey bars in order to avoid accidentally scoring the losing goal. Now that’s true sportsmanship.

I applaud the kid-friendly policy of this Canadian youth soccer league. Oh, sure, some people may criticize this new policy as yet further conclusive proof that the USA can beat the crap out of Canada anytime it wants. But I will ardently defend this enlightened new approach. Our kids’ psyches are extremely fragile from the first 18 months of life until the time when they no longer need our emotional and financial support – typically around age 37.

We need to shelter our children from anything that might damage their self-esteem, such as losing 27 to 0 in a youth soccer match, as happened to nine-year-old Sarah Miller’s team last weekend. Sarah is the goalie. Think of what such a devastating thumping might do to her self-confidence. The last thing little Sarah needs is to internalize that she is a terrible goalie. (Although, as an aside, I have to say, Sarah really sucks at goaltending. She has no business being allowed out of the stands. But please don’t tell her parents you heard it from me.)

As the Ottawa youth soccer league has taught us by its inspiring example, when it comes to our highly impressionable young children, life should not be about winning and losing, or showing up for practice, or getting cut from the baseball team just because little Jimmy can’t seem to figure out that the pitcher’s mound is not first base. Instead, our jobs as parents should be to protect our precocious angels from the real world that is waiting to beat them into submission.

That’s why I’ve adopted a totally new parenting approach that focuses on preserving my kids’ belief in their greatness, regardless of evidence to the contrary. In the past, if a teacher gave my child a D on an important math test, I’d probably have a serious chat with my child and ask why she chose to stay up till 1am playing Candy Crush on her cell phone instead of studying for the test.

But now I realize that such an interrogation might harm my child’s belief about her incredible brilliance. Now, if that same teacher were to give my daughter a D, I’d immediately berate the teacher for unfairly downgrading my child’s score simply because she gave incorrect answers. After all, when it comes to what’s right or wrong on a math text, who’s to say what the real answer is to 12 minus 5? It’s all so subjective. And I would be sure to praise my little princess on her outstanding choice of using a #2 pencil and remind her that she’s still an A+ student in my book. 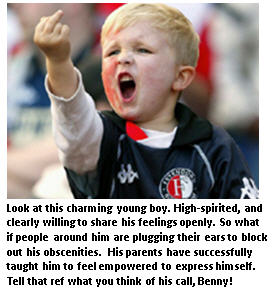 Childhood flies by so quickly. You will have plenty of time later on to awaken your kids to the reality that life does not always even up the score to make sure everyone’s a winner. Let someone else teach them that the world does not owe them a six-figure income and a penthouse condo by age 25. Now is the time to remind your young superstar how special they are – even if they just tripped and did a face plant during a soccer game, and did so while only riding the bench.

So, this summer, if by some act of blatant favoritism your perfect son or daughter does not get picked to play on your neighborhood’s Select soccer team, remember that your child is still incredibly gifted. It’s not your child’s fault that she skipped all the practices and couldn’t be bothered to show up for tryouts. That just means she has more time to work on that perfect tan this summer. She’s going to be a suntan superstar, I just know it.