My wild “Hangover” weekend in Vegas 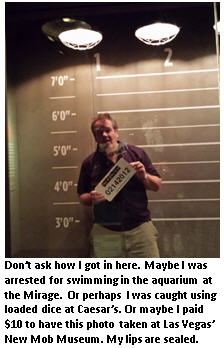 I’m not much of a drinker. And I don’t really gamble. So naturally, I decided to go to Las Vegas for the weekend. What a bizarre place Vegas is. I must have had one hell of a weekend, because I barely remember a thing. It’s all still a blur. It was just like something out of the movie The Hangover – except without all the strippers, car chases, Bengal tigers in my hotel room, or getting the crap knocked out of me by Mike Tyson. But otherwise, the parallels with the movie were eerie.

I decided to stay at the Hooters Casino Hotel – mainly for the pool. At first everything was fine – until I ventured out onto the strip and did something no sane tourist in Las Vegas would ever do: I made eye contact with the street hawkers. As a result of my reckless mistake, I was offered 27 invitations to strip clubs, a chance to ride a white tiger at the Mirage, and $100,000 of term insurance with an option to convert to whole life at age 65. I finally broke down and grabbed one deal that was just too enticing to resist: 60% off on linens at Bed, Bath & Beyond.

I don’t remember much of what happened after that. But the next morning, I woke up to find a scantily clad woman in my bed – with a wedding ring on her finger. Oh, shit. Who was she? A cocktail waitress? A stripper? What had I done! I frantically put on my glasses. Oh… right. My wife came with me on this trip.

I vaguely remember something about seeing a David Copperfield magic show. How in the world did I end up there? All my memories seemed to have disappeared.  Was I hypnotized? No… wait – didn’t my wife buy tickets for some show last autumn?  Yeah, I remember – the price was cut in half – a great deal!  That would explain it. 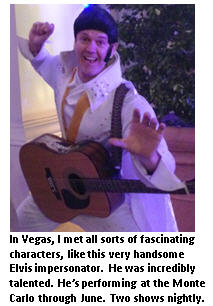 Now that I was in Vegas, it was as if I’d lost all sense of self-control. My inhibitions evaporated. I acted on impulse. Like for breakfast –  I always eat responsibly – a banana, a slice of whole wheat toast. But this was Vegas, baby.  You don’t do whole wheat toast here. So I dove head first into self-indulgence. “Waiter! Bring me a double order of chocolate crepes, extra whipped cream and cinnamon powder to boot.” Don’t judge me. Vegas has a power over a person that I can’t explain.

I thought my drinking problem was long behind me. But in Vegas, the old demons came back with a vengeance. I really have no idea how many drinks I downed that night. Six? Eight? Thirteen? Frankly, I lost count after my fourth Mountain Dew. But this was Vegas, and I didn’t care. After all, as they say: What happens in Vegas stays…. on Facebook.

I’m thinking I also might have gone to see a Donny Osmond matinee tribute show at the Golden Corral. (That place makes the best pancakes.) I’m not sure who Donny was paying tribute to – or why his skin was so dark or why he sang with a New Delhi accent, but his rendition of Ahnd Dey Culled it Poopy Love brought me close to tears.

While I’m not much of a gambler, I was after all in Vegas. So once again, I succumbed to my base impulses. People later told me that I apparently strode with more than my usual swagger into the casino at Caesars.  I walked past the roulette wheel. Roulette wheels are for chumps. I didn’t waste my time at blackjack. Blackjack is for losers. 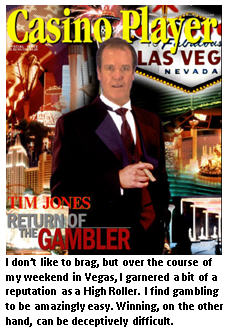 I proceeded directly to where the high rollers hung out. I laid down ten crisp big ones.  I must have been where the serious action was because I vaguely recall being startled by the striking image of Beyoncé, beckoning me in a dazzling sequined evening gown, painted tastefully in fluorescent colors on the slot machine in front of me. I honestly can’t recall how long it took me to blow through all ten of my dollar bills. But the adrenalin rush must have been worth it.

Then I probably ran out into the cool night air to soak in the shimmering lights of Las Vegas. My heart must have been pounding underneath my brand new T-shirt (which I think I bought for 75% off out of the back of a van) which read “FBI: Female Body Inspector”. I probably thought the T-shirt would be a chick magnet. I later remembered Bill Nye the Science Guy explaining that magnets can also repel – which might be why my wife would not come anywhere near me while I wore that shirt.

I found out later that in the excitement of the moment, I apparently decided to change out of my new T-shirt and into a luxurious zip-on tuxedo. Bystanders say I grabbed the hand of the first woman I saw and whispered in her ear “Let’s get married tonight.” Fortunately for me the first woman I saw was my wife, or I would have had some serious s’plainin’ to do when I got back to the hotel. 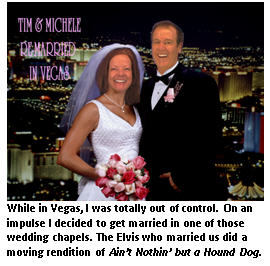 We must have raced to the first respectable Elvis Wedding Chapel we could find – preferring, of course, the young Elvis as our chaplain over the older fatter version. We renewed our wedding vows. My wife says I vowed to start leaving the toilet seat down and she vowed to put up with me so long as I burned my Female Body Inspector T-shirt.

That’s all I remember. The next thing I knew, the whirlwind weekend was over, and I was back at home catching up on old episodes of The Jerry Springer Show. Life had returned to normal.

I only have one regret about my crazy weekend in Vegas. In all the excitement, I completely forgot to use that 60% off coupon for Bed Bath & Beyond. Maybe on my next wild trip there.