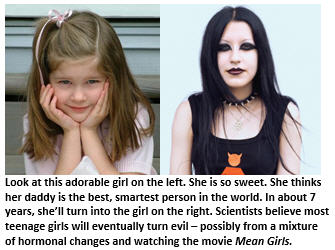 But with that exception, I stand by my theory. Oh sure, my theory, which is only about 27 minutes old, could be colored slightly by the fact that my two daughters had a sleep-over last night with nine of their friends, and our family room looks like the aftermath of Hurricane Katrina. 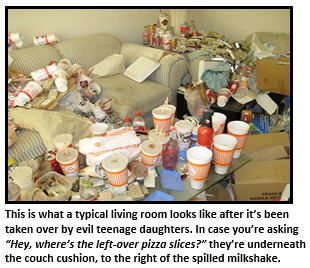 My girls see nothing wrong with the fact that there are enough Doritos, pizza slices, melted ice cream, and half-drunk cans of Diet Pepsi scattered in every nook and cranny of the family room to feed a third world country. Oh and nice job, girls, with putting away, what are the words I’m looking for… oh, right… ABSOLUTELY NOTHING!!!

I have conducted an impressive amount of first-person field research to support my theory that all teenage daughters at one time or another turn evil. In my case, it seems to have happened around age 13, 7 months and 5 days, when both my daughters changed from the perfect little angels they once were into fashion-obsessed, textaholic teenagers who spend roughly 87% of their spare time playing games on their iPod or texting other like-minded evil teenagers, leaving approximately 1.5% of their remaining time for being vaguely aware of their parents’ existence.

As a parent you cannot possibly understand all of the intellectual, life-altering epiphanies your teenage girls discover on a daily basis — such as why the American Eagle clothing store is so totally 5 minutes ago and Forever 21 is so totally now.  Here is something I did not know: Human intelligence apparently reaches its peak between the ages of 14 and 15 – and goes down steadily from there until it bottoms out….at whatever age I happen to be at the moment.

Fortunately for me, given my obviously limited, near-Neanderthal level of “bang the rocks together” intellect, my girls have kindly simplified their method of communicating with me to a more primitive, pre-vocal system of exasperated sighs, eye rolls, agitated glares and grunts – really endearing grunts. Amazingly, these same girls somehow are miraculously able to shift instantly back to a more advanced verbal communication system involving the full use of facial muscles and multi-syllabic words and are able to form something highly evocative of a genuine smile – about the time they need me to give them a ride to the mall with their friend Monica.

Could your teenage daughter be evil? In Part II of this blog post (next week), I offer up a simple seven-question test to help you determine for yourself whether or not your own teenage daughter might be the daughter of Satan. I’m laying 9 to 5 odds she is.

(* Source: My wife told me about this study one morning while I was in the bathroom flossing. My wife would not make up this sort of thing.)

or sharing this post on Facebook. And if you have one or more evil teenagers at home, there is hope. Ah, I’m just pulling your leg. There’s no hope – unless you can afford to send them off to boarding school – you lucky bastard.