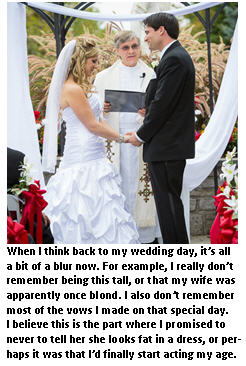 Recently my wife and I celebrated our 30th wedding anniversary. Wedding anniversaries are the day each year when millions of us husbands take time to show our wives just how much they mean to us, before we go back to complaining about them to our male friends the other 364 days. Today, I’m thinking about all the joy my wife has given me these past three decades. It’s the little things mostly, like when she gently reminds me for the fourth time that I forgot to take out the trash, or her endearing habit of nagging me about my weight whenever I reach for a donut, or her playful quips about how she’d be living in a far nicer house if only she had married that Mark Saperstein fellow.

I fondly recall that magical day when she and I walked down the aisle and both said, “I do.” I remember the vows we made to love, honor and cherish one another until one of us decides to kill the other. Admittedly, I was so lost in happiness that day that I may have forgotten a few details. Now, as I think back on our 30 years of wedded bliss, it seems that list of wedding vows must actually have been much more extensive. Here are some of the other vows I apparently made on that special day:

My dearest darling, I promise you, for as long as we both shall live…

…that I will respect you as my equal and never ask you to do a household chore that I would not be willing to do myself – with the addendum that I agree to killing all bugs like the icky spider in the bath tub, for that is a “man’s job” for which it’s perfectly reasonable to interrupt my Sunday afternoon nap even though you could have killed the damn bug simply by stepping on it with your shoe.

…that when we have disagreements, I will patiently work with you to reach a compromise, in which I will share my point of view, then listen with an open mind to your point of view, before finally agreeing to do whatever it was you wanted to do in the first place – with my humble apologies for ever questioning your greater wisdom in the matter.. 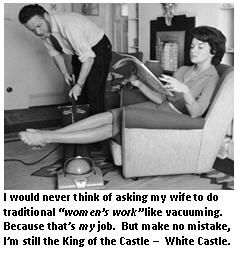 …that I will never comment on how sexy another woman is, nor will I point out the minor inconsistency when you announce that if George Clooney ever showed up at our door, you’d sleep with him in a New York minute.

…that whenever I get sucked into a heated shouting match with one of our teenage daughters, it’s because I failed to exercise the proper parental restraint to de-escalate the situation, which should not be confused with the totally unrelated situation when you get provoked into a similar screaming contest, in which case it’s totally our daughter’s fault for acting like a complete brat, and someone needs to show her who’s boss around here.

…that whenever the guys invite me out for a boys’ poker night, I will happily stay home with you, just for the privilege of listening to another lecture about how at the last boy’s poker night, I lost $50 – money which you cogently argue would have been much better spent on a set of wine glasses at Pottery Barn, to complement the other five sets we already have.

…that we both hate it when the kitchen counter gets cluttered with dirty dishes, so to avoid this problem we’ll team up, taking turns putting the plates, glasses and silverware into the dishwasher. I will accept your compromise for me to do it on days ending in the letter “y” and you’ll do it all the other days.

…that whenever we have an argument, we will not hold onto grudges and will never go to bed angry, just so long as I remember to recite the following magic phrase: “I’m sorry, dear. You’re right. I don’t know what I was thinking.”

…that if we find something broken around the house, and there were no kids around when it happened, I must have somehow broken it (perhaps in my sleep). And that it’s the man’s job to repair it. 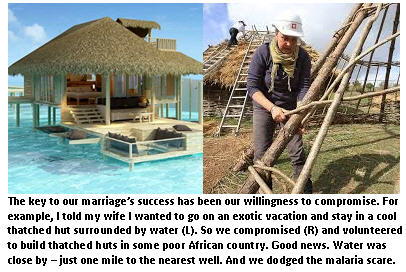 …that the next time I bring up the idea of buying a new car to replace my 2001 Toyota with 190,000 miles, I will happily bow to your superior argument that a better use of these funds would be for you to blow it all on a one-month trip with three of your girlfriends to some sweltering, mosquito-infested jungle in Burma to pet the animals at some elephant sanctuary. The brochure looks so enticing, dear.

…that during the Winter Olympics, when given the choice of watching coverage of the men’s luge or ice dancing competition, we will watch the ice dancing because, as you so accurately point out, the Olympics’ ice dancing only happens every four years.

The complete list of my wedding vows actually goes on for three more pages, but I have to wrap this up. Apparently another one of the vows I made was to build a backyard fence this summer. I have no idea why I would have put such a pledge in my vows 30 years ago, but my darling wife swears I did. And as she so kindly just reminded me, that fence isn’t going to build itself. I’m sorry dear. You’re completely right. I don’t know what I was thinking.

PS: If you enjoyed this week’s post, let me know by posting a comment, giving it a Like or sharing this post on Facebook. Want to really take your sweetheart’s breath away on your next anniversary? Tell her that your gift to her is a lifetime subscription to View from the Bleachers. She will be speechless.