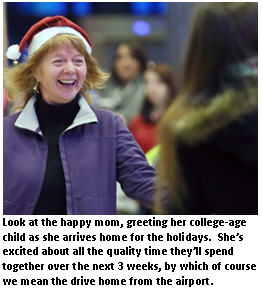 Recently both of our daughters came home for the holiday break. Their return brought us a new set of parenting concerns. When kids go off to college, they suddenly consider themselves adults. They feel the old kids’ rules from their high school years no longer apply. So it can be stressful to know how to parent your almost-adult child now that they’ve concluded they no longer need to listen to a word you say. That’s why, in the most loving way possible, you should periodically remind them – roughly every two hours – about who is paying for their college and how you’d be delighted to spend that money on a Mediterranean cruise for yourself if they don’t clean up their act during their brief time home.

I would like to share my best parenting advice for how to get your kids to cooperate when they come home from college. I really would. But I can no more decipher the code for how to parent college-age kids than I can explain why some people pay $200 more for a cell phone custom-colorized to match their purse. But I will try to impart some wisdom just the same.

Challenge #1: The pit stop. Many parents experience the short-lived joy of welcoming their kids home for winter break only to become annoyed as their child vanishes seconds after their arrival, shouting, “Hi, Dad. Gotta go. Meeting Bridget to go shopping.”  It’s easy to feel like your kids are only using your house as a place to crash at night, but that’s not true. They are also using your house for the free food, free laundry service, and free use of your Lexus. Oh, and just in case you were wondering whether your child might be heading off to shop for a Christmas present for you – they’re not. They’re going shopping to swap out the color pattern on their swaggy new cell phone so that it can perfectly match their – well, you get the picture.

The key is to be patient. Your child is growing up, by which I mean they are turning into a narcissistic young wise ass who thinks the world owes them a college education, and they can come and go as they please with no responsibilities. So you just gave them $100 spending money, along with the keys to your Lexus simply because they begged you “pretty please, Daddy” – you’re still not getting a present. Let it go. 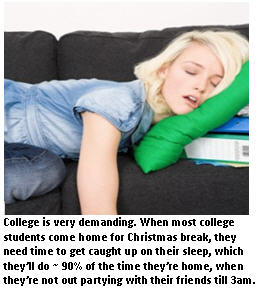 Challenge #2: The messy bedroom. Another frustration many parents share (and by “many parents” I mean this writer) is how when their kids come home from college, they have somehow forgotten all the rules about keeping their room clean. Within 24 hours of arriving home, their room suddenly looks like a crime scene in which every square inch has been ransacked in a desperate search to locate the missing Hope Diamond.

You ask them to clean up and they say something like, “I know. Chillax, dude. I’ll do it when I get back from Trevor’s party” which, when translated using the Google Teenager-to-Parent language translator, means “over my dead body.” Once again, be patient. Your son is still figuring out this thing called adulthood. And no, I have no idea how he sneaked that beer keg into his bedroom closet. But I’m confident he’ll dispose of it just as soon as he and his five buddies – who somehow ended up crashing on your living room floor last night – have consumed the rest of the beer – which should be shortly before noon.

Challenge #3: The boyfriend/girlfriend. Now that your precious little angel has morphed into a self-righteous college student who is way smarter than their parents, it’s understandable that they might think they have achieved the status of adulthood and all the privileges that come with it, including having their boyfriend/girlfriend sleep in their bedroom under your roof.

This confusion is understandable because despite the 27 times you’ve said “under no circumstances is a boy EVER allowed to sleep in your room unless that boy is your husband and the year is 2025”, she never quite understood that this provision was meant to remain in effect beyond age 18. And she’s now 18 and four months – and legally allowed to vote. So she votes that Blake can stay overnight in her room upstairs. See? It’s just a simple misunderstanding – one that can quickly be ironed out by means of a long, heated shouting match involving cogent debate points about how you’re the worst parent in the world and a murderer of love. Good luck getting that Christmas gift now, dad.

Challenge #4: The chores negotiation. When they were younger, you told your kids you needed them to help with the chores, and they dutifully complied. Remember? Okay, perhaps I’m confusing your family with an episode of the 1950’s sitcom Father Knows Best. Now that your child is back home for Christmas break, don’t count on them to help with the vacuuming… or making dinners… or spending one second with the family on Christmas day past the clock strike of noon (after they have slept until 11:30 am). 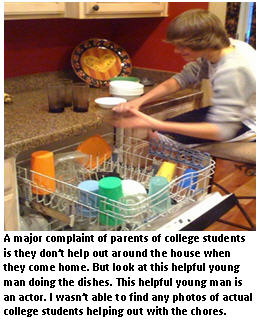 Now that they’re in college and can legally drink hard alcohol (if they moved to Lithuania), they consider themselves fully emancipated. And every request turns into a negotiation – including your request that they try to act nicely to their younger sibling, for which they will most likely demand an exorbitant fee.

It’s normal that they will push back when you ask for their help doing the dishes or, say, feigning consideration for anybody else’s needs while they are visiting. That’s because, let’s face it, there’s just not enough time for them to see all their friends, crash four rave parties, watch every episode of Game of Thrones, and still find time to help out around the house. Something’s got to give – like helping anyone related to them.

But you are still the parent. There are times when you simply need to lay down the law and remind your child that there is no such thing as a free lunch – ignoring the irony that during their entire visit, every lunch has in fact been free. Let them know gently but firmly that they will need to help out around the house if they expect you to keep paying for college. If you’re firm, they’ll respect you. No, just kidding. They won’t. But you just might get them to take out the trash once before they head back to college. Personally, I’d settle for them remembering to get rid of the beer keg in their bedroom closet. It’s starting to smell gross.

or sharing this post on Facebook. And if having your college-age child at home for the holidays was stressful, count your blessings. It could be worse. They could have told you they dropped out and are coming back home permanently. Pray that doesn’t happen to you.