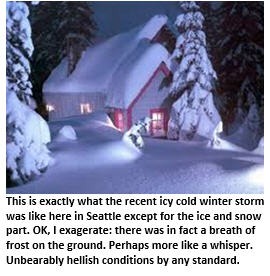 Oh sure, we’d read the recent news stories: Billings, Montana bracing for minus 27 degrees; Minneapolis digging out from 18 inches of snow and wind chills of minus 18; Detroit reeling, with 500,000 people without electricity. But those cities are used to dealing with snow and cold. And besides, they have snowplows. Here in Seattle we don’t normally get snow. And we don’t have snowplows. We would no more know how to use a snowplow than know how to survive a day without three lattes and an arugula salad. 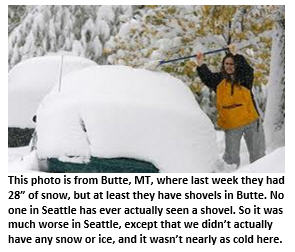 Day after day, for ten days, the frigid winter conditions paralyzed life as we know it in Seattle. Unlike roughly half of the United States which had to contend with heavy snow and ice last week, we didn’t experience any snow at all. Because this is Seattle. The last time we had a major snowstorm, people were still debating whether the earth was flat. But with highs in the low thirties, it was almost too cold to play golf.

Our misery was compounded by another unforeseeable weather crisis: intense sun glare. People here are not used to seeing the sun this time of year. Oh sure, the unexpected sunny skies meant stunningly gorgeous views of our famous snow-capped Olympic mountains and Cascade Mountains. And with the thin veneer of frost on the ground, each day resembled a festive winter wonderland without any actual snow to shovel.

But to add insult to injury, the blue skies and brilliant sunshine wreaked havoc on our morning commutes. In my own case, it must have added easily another fifteen minutes, thanks to multiple fender benders on the highways caused by sun glare. How could anyone have foreseen that the sun might be visible this time of year? Most of us had put away our sunglasses in storage weeks ago, not to be seen again until the summer solstice (and usually only on that one particular day).

It seems that just about every conversation lately has been about our bone-chilling weather. People in Seattle have been forced to don sweaters and overcoats they have not worn in ages.  I myself had no choice but to retrieve my trench coat and my plaid fedora hat I purchased in 1987. Public service announcements assured citizens that trench coats with 5-inch wide lapels and plaid hats were considered “retro” and thus could be worn in case of  emergency. But I still felt the judgmental stares. Hey, you do what you have to do to survive. 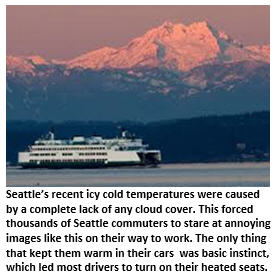 I even know of some friends who, in an act of sheer desperation, broke down and, for the first time in years, actually lit a fire in their fireplaces to keep warm. Thankfully, in just about every case, the electric “On” switch on their instant fireplace still worked. Otherwise, God knows whether they would have made it through the night other than by turning their electric blanket to HIGH.

A couple days ago, our wintery nightmare finally ended. Temperatures have returned to their seasonally appropriate range of 47 to 51. Families are hugging their loved ones and giving thanks to God that they somehow came through this terrifying trauma alive. Sadly, thousands of slugs which make this region their home and were not able to move to shelter quickly enough were not so lucky.

In the aftermath of our winter scare, life has pretty much returned to normal here in Seattle. People have put their sunglasses back in deep storage. Golfers have returned to the water-logged fairways, and, thanks to the return of the clouds and rain, drivers on the highways no longer have to worry about getting distracted by views of snowy mountain ranges. But I think I will buy a more fashionable winter hat, in the unlikely event the temperature here ever drops below 45 degrees again. I won’t go through that emotional anguish unprepared next time.

That’s the view from the bleachers. The recently cold, icy bleachers. Perhaps I’m off base.

or sharing this post on Facebook. I hope you did not have to endure the kind of sun glare Seattle just experienced. But if you did, I just pray you were able to locate a pair of sunglasses.