Sarah Palin wants to save Christmas. You can help by buying her new book. 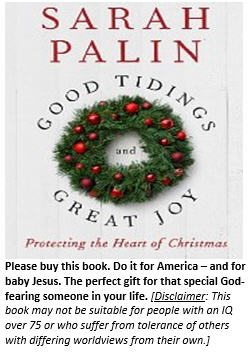 Christmas Day is just around the corner, a time of peace and love and harmony, unless you’re Jewish. But this year, our Christian values of tolerance and forgiveness are being overwhelmed by a cataclysmic war on a scale the world has never seen. The images we see on television are heartbreaking. When will this senseless war stop?

No, I’m not talking about the twelve-year war in Afghanistan, nor the civil war tearing apart Syria. I’m not even talking about the brutal Mattress Price Wars, although the televised images of those retailers viciously slashing prices before my very eyes is enough to make me cry. No, I am, of course, talking about something far more pernicious and deadly: The War on Christmas.

In her lovingly written new book, Good Tidings and Great Joy: Protecting the Heart of Christmas, distinguished author and former Alaskan beauty pageant winner Sarah Palin launches into a heartwarming tirade in defense of Christian values against the onslaught of political correctness, the secularization of Christmas, and the abominations of atheists and liberals (which two groups are, of course, essentially the same). And I for one could not agree with her views more, even if I understood what she was talking about.

I will be the first to admit that, like millions of Americans, I had no idea Sarah Palin could read, let alone write. But I was wrong. In her new pop-up coloring book, the ex-60%-of-one-term governor of Alaska makes a clarion call to save Christmas. What is destroying our American way of life is not a culture of gun violence. Nor the fact that the top 1% of society owns 40% of the nation’s wealth. It’s not even our faltering educational system. The real problem confronting us, according to Palin, is the war waged by millions on the left against Christmas.

Palin’s motive for writing this book is explained in her own words on the book’s back cover: “If I’m for Christmas, it’s only because I’m for Christ.” It’s clear that unlike liberals and people wanting to take away our guns, Palin loves Jesus. And the fact that she stands to rake in $10 million from book sales to Wal-Mart shoppers was the furthest thing from her mind when she hired someone to ghostwrite her book.

In reading her inspiring message of hope for all Christians in this great Christian nation of Christians, I came away with a startling realization about how much hatred for our savior lies deep within the misguided hearts of the average Muslim, Jew, Hindu, Buddhist, vegetarian, environmental activist and community organizer. It was not until I read this book that I finally understood why Jesus hates gays. The War on Christmas, Palin points out, is first and foremost a war for our souls. And thanks to insidious, politically correct wishes for “Happy Holidays” oppressing our attempts to wish our fellow citizens a “Merry Christmas,” Satan and his growing army of Christmas-destroyers are winning the battle.

Here is a short passage from her book that I pray you will appreciate as much as I did:

Jesus’ birth is not about Black Friday sales. Why does Christmas cause so much anger just by its very name?  If Jesus, coming to us for our salvation, which, when I think back upon it, it’s because of the lamestream media, whose hostility to Christmas, such that who are they to judge, notwithstanding if we take arms courageously to protect the Bible, then perhaps those without salvation, having caused such an uproar, for whom was the baby swaddled in a manger, which you can see from Alaska, and good will to all mankind except for angry homosexuals who don their gay apparel…

Amen, Sister Sarah, amen. I could not have said it better myself (had I been in a drunken stupor from spiked eggnog). 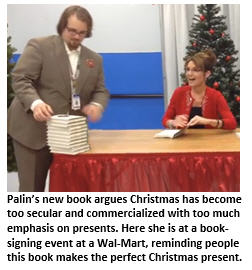 Palin zeroes in on the real meaning of Christmas. It’s not about Black Friday sales on flat screen TVs and tablet PCs. It’s about pointing out how Americans who have discovered Jesus are better than everybody else. As Palin soothingly explains, the real crisis threatening Christmas in America is all those atheists trying to return Christmas to its origins as a pagan festival celebrating the winter solstice during which Democrats would get drunk and fornicate with goats. Why do they hate baby Jesus so much? For God’s sake, he’s just a baby.

In this amazing book, written in a tasteful Helvetica font, Palin’s mission is to be that brave voice speaking on behalf of all Christians in America’s heartland (circa 1953). She courageously reveals that Christmas isn’t about sharing the holiday quietly with your loved ones and opening presents. It’s about lovingly shoving your own views about Christmas down the throats of people who don’t share your deeply-held fundamentalist beliefs, and compassionately reminding all Americans why it’s important to load your hunting rifle and rid this Christian nation of those intolerant Jesus-haters who are desperately trying to keep us from spreading God’s Christmas message of peace and good will to mankind.

Why waste time reading the hackneyed holiday musings of Charles Dickens, Clement Clarke Moore or Robert Frost? They’ve all been surpassed by the brightest star atop the literary Christmas tree, Sarah Louise Palin. Please do your patriotic duty this Christmas and buy her incredible Christmas book.

Help Sarah save Christmas for all of us – well, most of us, anyway. If enough red-blooded Americans purchase her book, it just might make Sarah Palin the most miraculous profit of God in our lifetime.

or sharing this post on Facebook. And have a wonderful Christmas season or whatever religion you practice, or none of the above. Just don’t tell Sarah P I said so. She can be so ornery at times.