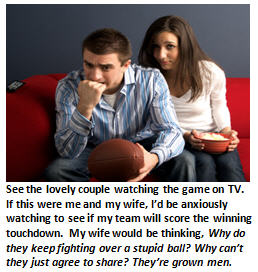 If there’s one thing that binds us together as a society it’s ESPN…. and ESPN 2… and ESPN News… and ESPN Classic … and the other 12 ESPN channels that space does not permit me to include here. But to my wife, all sports programming is a complete waste of time because, according to her, what difference does it make who wins? She should be grateful we don’t live in Alabama, where such heresy is officially grounds for divorce. I have long ago forgiven her for the fact that she can’t tell the difference between a football and a hockey puck. (And she’s Canadian!) You see, as embarrassing as this is to admit, my artist wife has as much interest in the subtleties of the Read Option offense as I have in the subtleties of Da Vinci’s brush stroke techniques. (My wife wanted me to insert here that Da Vinci used some breakthrough technique called sfumato. Thanks for sharing, honey. That was really important information.) 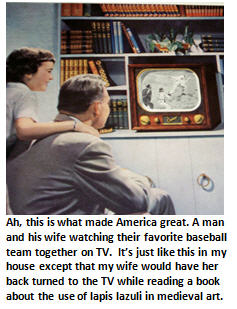 I realize in retrospect that I should have inserted an additional clause into her wedding vows: “I promise to become a rabid fan of any sports team over which my husband chooses to obsess. I vow to do my spousal best to know the box score for any sporting event that involves a ball, and will do my utmost to comprehend the meaning of baseball’s Infield Fly Rule – till death do us part.”

Over the past 30 years, I have tried on countless occasions to enlist my wife to watch sports on TV with me. Trying to explain to her what constitutes offsides in soccer is like trying to explain to our cats the meaning of, well, offsides in soccer. If I am lucky enough to get five minutes of her attention to a game I’m watching, her focus will have absolutely nothing to do with what’s actually happening on the field. Instead, she’ll fixate on the interplay of light and shadow on the players’ uniforms. Who cares that they just won the game on a last-second field goal? What matters to my wife is the juxtaposition of colors in the stands as the ball goes sailing through the uprights.

I got to thinking, what would sports play-by-play be like if my wife were in the booth calling the action? It would probably be something like this:

Football: The two teams look great in their uniforms. I can’t decide which team is better, the guys in the green and white outfits or the guys in the orange and teal. Orange and teal remind me of one of Monet’s painting of water lilies, so I think I have to give the edge to that team to win.

Soccer: What an exciting game. I have no idea what the score is. The guys in green seem to be kicking the ball around a lot and not sharing it with the red team at all. Not very neighborly. The crowd seems to be shouting about something. I wonder what all the fuss is about. Maybe folks saw a rainbow. I love the vibrant color of a rainbow in the late afternoon sunlight. 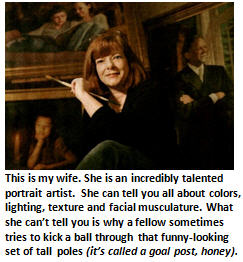 Boxing: I’m not sure how far into the game we are. I’m going to take a wild guess and say the fifth inning. The tall fellow just keeps hitting the shorter fellow in the head and chest a lot. Not sure what his issue is. Perhaps the shorter fellow said something crude about his wife. If this goes on much longer, I am afraid the shorter fellow might fall down. I wish they’d just try to talk things out.

Baseball: Sure are a lot of fans here today. Oddly, one team has nine players on the field and the other team only has only one. That doesn’t seem very sporting to me. This could turn into a route unless the referee lets the other team add a few players.

Many people have asked my wife, How have you put up with a humor writer as a husband all these years? But if you ask me, they’re asking the wrong question. How about, How have I put up with my wife all these years? She’ll argue that she knows as much about football as I know about art. But I disagree. I am a huge fan of art. Just watch Tom Brady thread the seam of the opposing team’s nickel defense and light them up for 400 yards and five touchdowns. Now that, my friend, is a work of art.

or sharing this post on Facebook. If you do, I’d be open to considering trading you my second round pick in my fantasy football league draft. Think about it, won’t you?