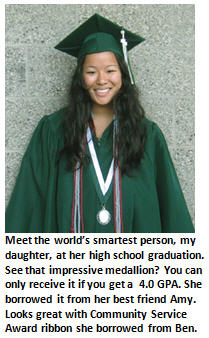 Personally, I can’t stand it when other people brag about their kids. You’ll never catch me puffing up my chest, bragging about the fact my daughter won the National Chess Tournament for kids seven and under at the age of five. Nor will you ever hear me boast about her eighth grade science experiment, inventing an internal combustion engine that ran on tap water. You’ll never hear me talk your ear off about my daughter scoring four goals to lead her team to victory in the state soccer championships in ninth grade either. That’s because I hate to brag about my kids’ incredible achievements (particularly when it involves making things up).

But the one thing I have to admit to taking pride in is the fact that I am – much to my surprise – the parent of the world’s smartest person. I’m talking about my teenage daughter Rachel. I base this conclusion on more than a decade of longitudinal field studies observing her interaction with my wife and me. At first, I was not fully aware of just how superior her intellect was – in part because at the age of four, she still believed in unicorns and was convinced we should trade in her younger sister for an Easy Bake oven.

Over time, however, it became clear just how amazingly bright she was compared to her stupid parents – because she made a point of reminding us of that fact on a daily basis. For years, I lived under the misconception that earth revolved around the sun. But by the time Rachel hit her teens, it had become obvious to me – the entire universe revolved around her.

It was actually not until Rachel turned 13 that her claim to being the smartest person in our house was made official (by Rachel). She told me one day that she realized she had been wrong about something she’d said two years earlier. She modestly admitted, “Oh yeah, that was a couple years ago, back before I knew everything.” (A direct quote. I swear.)

Looking back, the evidence of her superior intellect was all around me. When Rachel was six, I would often suggest that she share her toys with her younger sister. However, she was convinced this was a stupid idea, because in her research she had concluded that her younger sister Emmy was a monkey-brained, poopy-headed worm monster who would break all her toys. Then, one day, while Rachel was pulling on Emmy’s hair and eating all of her sister’s candy, Emmy took Rachel’s Barbie doll and bit its head off. Rachel used this opportunity to point out the absurdity of her father’s misguided premise of the value of sharing one’s toys. 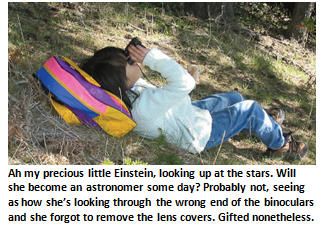 When Rachel turned eight, she successfully proved her hypothesis that if you whine, beg, badger, gripe, complain, pester, and whimper endlessly for four months, your parents will eventually break down and get you a kitty – and let you name it Rainbow Cutie because that’s the best kitty cat name in the world.

When she was 10, she invented an ingenious contraption she named the Boy Catcher (designed to ensnare any unsuspecting boy who foolishly set foot in her room), using nothing more than paperclips and string. (True!) Sadly she was never able to patent her brilliant invention.

By age 12, her artistic brilliance shined brightly in the form of an amazing piece of abstract artwork she created on a canvass consisting of her bedroom floor. She used a most unusual combination of common household items, including 27 pairs of dirty socks, three dozen crayons, a half-eaten box of Cheez-its, an unopened yogurt container that had expired in 2003, a Valentine card from some boy named Kenny from second grade who apparently eluded her Boy Catcher, sixteen dollars and twenty seven cents in dimes, nickels and pennies, a diary opened to a page with the heading “Why my parents are the worst parents in the world,” and every t-shirt she had ever worn since first grade. 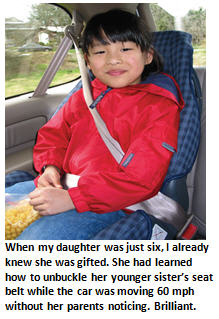 When Rachel turned 15, I errantly suggested to her that the best way to succeed and be happy in life might be to study hard, get good grades and get into a top-rated college. But of course, I was wrong. The best way to be happy, according to my daughter, was to stay up until 3:30am on a school night posting on Facebook, drinking three cans of Red Bull, and texting her girlfriends about what a bitch Samantha was for not inviting her to the party.

Ever since she was old enough to know how to record Sponge Bob Square Pants over the West Wing episode I had been waiting all week to watch, my daughter has constantly pointed out to me that she was way smarter than her dad and how just about every piece of parental advice I’d ever offered was totally lame. I had no idea she had garnered infinite wisdom about life and love by the age of 13. After years of constantly reminding me that she had all the answers, I finally accepted that she must indeed KNOW EVERYTHING! So, pardon me if I boast about being the proud poppa of the world’s smartest person.

But I have to say, I’m starting to worry just a little bit. I visited my daughter last month at college, where she is now a sophomore. And on three separate occasions I offered up a suggestion…. And she totally agreed with me each time. Uh-oh. Perhaps my perfect little genius is not quite as brilliant as she used to be. Or perhaps I am just getting smarter.

or sharing this post on Facebook. And if you have a teenage daughter who is as brilliant as mine, you have my deepest sympathies.