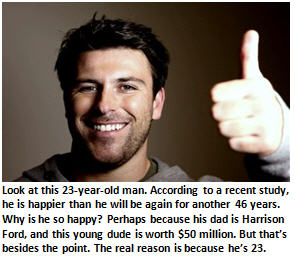 Statistically speaking, you can expect to reach your apex of happiness somewhere around July of your 23rd year, which is about the time you’ll get your first raise and impulsively purchase that Audi S6 (starting price $71,900). Shortly afterwards, your happiness begins to ebb, as you soon realize you’ll never be able to afford the $530 / month car payments and trade it in for a Hyundai Elantra. 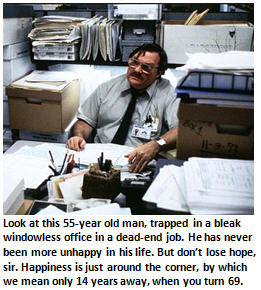 By age 55, your life, statistically speaking, has changed a lot from your Audi S6 glory days. You’re probably hoping your your Elantra with 177,000 miles will make it to 200,000, wondering if your wife is going to leave you for a younger man, and barely squeaking by on your unfulfilling job in a telemarketing call center. You’re counting the days until your 2.5 annoying, self-absorbed teenagers have moved out of the house and have self-absorbed kids of their own.

When you hit 55, you realize your life is a hollow shell of the life you’d planned back at age 23. The high point of your day is most likely watching Wheel of Fortune after a dinner which consists of leftover cold pizza from the lunch you ate while you were chained to your cubicle, answering phone calls from irate customers demanding a refund for the penis enlarger you sold them which they now complain doesn’t work.

But don’t lose hope. It gets better – not much better, mind you, but a little. Fast-forward to 69, and life gets rosier again. For many of us, by 69, we’ve made peace with the dismal failure our career has been, like writing a humor blog that at its peak had 11 readers. For many of us, by now we’ve been forced into retirement and spend our days weeding and looking at brochures for exotic European vacations we’ve accepted we will never be able to afford and settling instead for a trip to Scranton to see our brother whose family we’ve never particularly liked.

At 69, life for many starts to feel surprisingly pleasurable, thanks in part to the pain meds they gave you after your hip replacement surgery which keep your brain in a constant state of euphoric buzz and help you forget about the fact that in just a few more months, you’ll turn 70 years old and the high point of your month will soon become the senior early bird special at Olive Garden.

Interestingly, a competing study argues we reach our peak happiness at age 33. But this study has been widely refuted by demography experts, who point out that John Belushi, Chris Farley, Eva Perón and Jesus Christ all died at age 33 – hardly a time of peak happiness for any of these notable celebrities.

And now for some FUN FACTS. Did you know…? 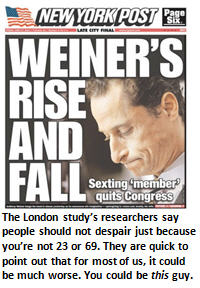 FUN FACT: Other factors can influence your level of happiness besides your age, including whether you’re an extrovert or an introvert, whether God gave you a body like Brad Pitt or one like George Costanza and whether or not you listened to your wife back in 2004 when she told you to buy 1,000 shares of Google stock when it was trading at just $60 a share.

FUN FACT: In the Inuit culture of Arctic Canada, elderly tribe members are known to be extremely happy at age 69 – in part because they no longer have to hunt and fish for their daily meals, thanks to their revered status, and in part because they know they have at least more three years before they’ll be abandoned to die alone on a remote ice floe.

FUN FACT: According to one demographic researcher, our happiest age was The Age of Enlightenment, but we’re pretty sure he didn’t quite understand the question.

This study’s findings have even helped some progressive business owners with their staffing strategies. Forward-thinking CEOs know that happy employees do the best work. And since the happiest employees are 23, increasingly, executives are only hiring 23-year-olds … and then firing them when they turn 24 – because they know that by age 24, those employees are going to have developed a serious attitude problem, and keeping them around is just not good for team morale.

So what should you do if you’re about to turn 24 and about to begin your slow descent into despair? First, just be thankful you’re not 55 – those poor bastards. Second, seriously consider remaining 23. Jack Benny successfully remained 39 for more than a quarter century (back before researchers discovered how miserable life was at 39).

or sharing this post on Facebook. And if you happen to be 55 and you’re feeling depressed, my advice is to blow your retirement nest egg on a new Porsche 911. Don’t bother asking the Mrs. I’m sure she’ll be thrilled.