Please forgive my need to rank everything. It’s 1 of my top 5 flaws. 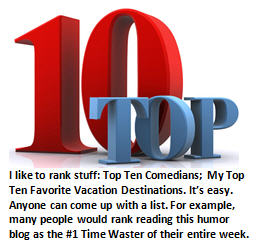 My wife will happily tell any random stranger she meets that her husband is far from perfect.  On a scale of 1 – 5, I think she’d probably rate me a 2.4.

Okay, so I’m not perfect. When it comes to my looks, I’d give myself maybe a 6 out of 10. My taste in clothes? Perhaps a 4 – although my wife would score me a 1.5 if we’re talking about ties. (What’s wrong with a paisley tie adorning a Lacoste shirt anyway?) My humor writing ability? Hmmm. Are we grading on a curve?

My point is I have plenty of shortcomings, but if you ask my wife, she’ll tell you – especially if you’re a complete stranger – that my most irritating personality quirk is my compulsive need to rank…everything.

For example, in writing this week’s post, I chose Arial 9 point because it’s always been one of my five favorite fonts (right after Comic Sans and just ahead of Garamond). Okay, I admit it. I do have a tendency to rate and rank stuff. I can’t resist asking other people to rank things too. For me, it’s an ice breaker. I’ll often start a conversation with, say, a waitress at a BBQ ribs restaurant, with, “Hi, Carla. Nice rack you got there. Quick question: Which three states would you least like to live in?”

Or I might greet my teenage daughter with, “Rise and shine, Rachel. It’s 2:15 in the afternoon. Time to get out of bed. Oh, by the way, of all the pets we’ve ever had, which one was your very favorite? (And because I’m sure you’re curious, I would have accepted any of the following: Dusty, Flumpy, Buttons, Captain Video, and Rat Bastard.) 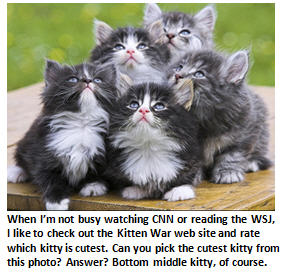 My wife finds my need to rank everything, well, really rank. But it’s not just me. Every time I’m in the grocery store checkout, just about every magazine cover has some teaser promoting another Top Ten list:

I can’t rent a movie from Netflix without being asked to rate it from one to five stars. When after 75 minutes I finally get through to a Comcast customer service rep about my Internet being down for the last 6 days, they will invariably invite me to take a short survey asking me to rate their service from 1 to 10. (I usually give them across the board 1’s but will throw them a bone and give them a 5 for cleanliness.)

My compulsion started back in grade school when I asked my best friend to rank his favorite friends. I think he got all the way to his 47th favorite friend without mentioning me before he said he had to go home and asked if he could borrow my bike.

Over time, my obsession with ranking things escalated. At first it was innocent enough – ranking the top five tastiest breakfast cereals. Gradually, I migrated to ranking more expensive things like video games and eight track players before working my way up to big ticket items like cars and high-yield mutual funds.  It’s a hard habit to break. I once went an entire week without ranking anything. That was the 3rd worst week of my life. 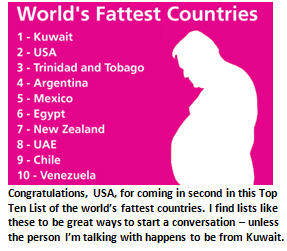 I find that asking people to give me their rankings about things gets them to open up with me. I often learn things about them that I never knew before. Like when I recently asked my neighbor Antonio, “Of all the ex-girlfriends you’ve ever dated, if you had to marry one of them, which one would you choose?” Who knew that Antonio hates being asked intrusive questions like that – or that he’s gay? Thanks for sharing, Antonio.

Okay, so I like to rate things. There is almost nothing I won’t rate or invite others to rate: top five foods if you were trapped on a desert island (chunky peanut butter would definitely be on my list); the ten best television sitcoms of all time (can’t leave The Dick Van Dyke Show off the list); the ten stupidest mistakes you’ve made as a parent. (#3 on my list would be the time I taught my 9-year-old daughter how to hitchhike. But I have to say, she really surprised me when three days later she called from a pay phone outside Nashville, Tennessee, asking if I could come get her.)

I realize now that my tendency to ask others to rate things annoys some people, including 4 of my 5 closest friends and my least favorite brother. But seriously, is this really that big a deal? I have to say, when it comes to my many personality failings, this one is relatively mild. On a 1-to-10 scale, I’d give it at most a 6.