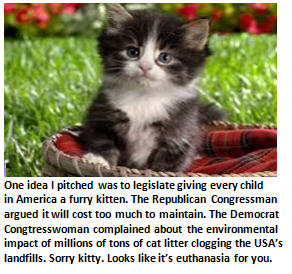 So I thought: What can I do to help our beleaguered Congress improve its legislative track record and get some things done? And then it hit me, like a 350-page pork barrel amendment – help Congress pass laws that nobody could possibly oppose! So I came up with some brilliant ideas and ran them past a couple of local Congressmen, one from each party, to get their take: Democrat Congresswoman Joanne Dumbarton and Republican Congressman Bruce Assini. 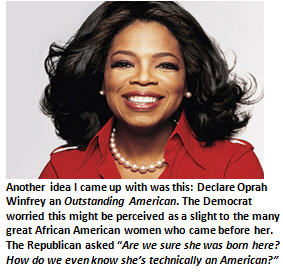 My idea: Proclaim Field of Dreams the best baseball movie of all time.

Congressional Democrat Dumbarton response: I can’t support this. This film sends the clear, misogynistic message that baseball is an exclusive men’s club. A more appropriate selection is League of Their Own, about a women’s baseball team. We must promote gender equality. Besides, it got an 89% on Rotten Tomatoes.

Congressional Republican Assini response: Are you kidding me? No way will I back this bill. Kevin Costner can’t act his way out of a batter’s box. A much better pick would be Air Bud. That dog can act.

Dumbarton: Air Bud was about a dog that plays basketball, you doofus.

Dumbarton: While I concur that you can never have enough cabinet level positions or federal agencies with thousands of bureaucrats, I am not sure this is really where we should be applying our very limited resources in these tough economic times. Instead, I feel strongly that we should introduce three new cabinet-level posts: Secretary of the Spotted Owl and other Endangered Avian Species, Secretary of Gay Marriage, and Secretary of Kindness. There is not enough kindness in America these days – let alone toward gay spotted owls.

Assini: Secretary of Kindness??? What a load of crap, you bleeding heart. This is a classic example of creating mountains of governmental bureaucratic waste. We should dismantle at least 8 of the 15 cabinet posts and replace them with three much more vital Cabinet positions: Secretary of Military Drones, Secretary of Christian Affairs, and Secretary of Gay Conversion Therapy. 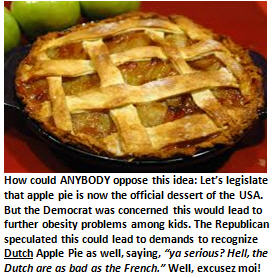 My idea: Announce a new national holiday in honor of Seal Team Six for taking out Osama bin Laden.

Dumbarton: Why single out a bunch of violent, testosterone-fueled women haters? I can’t support that. No way. But I would support a national holiday to honor our brave teachers and home healthcare workers. They know the meaning of kindness, I tell you..

Assini: Still stuck on this kindness fixation, I see. What – did you not get enough hugs when you were seven? We don’t need any more federal holidays. Besides, who would foot the bill? This is an appallingly bad idea. But I would support a national holiday in honor of Clint Eastwood. Now that’s a true patriot.

Assini: He served courageously in WWII in Flags of our Fathers.

Dumbarton: You do realize that was just a movie, right?

I was just about to give up when I came up with one last idea for a bill: Officially recognize America the Beautiful as the greatest song in history – with a rider amendment declaring America’s soccer moms the greatest moms in the world.

Turns out both Congressional delegates loved this idea and plan to co-present it next month. Then they got into a heated battle over whose name should appear first on the bill. In the spirit of compromise, they agreed to my suggestion to name it after a combination of their last names. Be sure to look for this Dumb-Ass piece of legislation to hit the floor of Congress soon.

I am very proud of what I accomplished here. I can sleep soundly tonight knowing that despite many fractious disagreements that still divide our great nation, I know one thing for sure: I am married to one of our country’s greatest soccer moms. No wait, she’s Canadian. And come to think of it, she’s not crazy about America the Beautiful either. But I love her just the same, flaws and all.

PS: If you enjoyed this week’s post, do your patriotic duty and let me know by posting a comment, giving it a

or sharing this post on Facebook. Tell your Congressperson it’s time they passed some meaningful legislation to improve our country – starting with free ponies for every child in America.