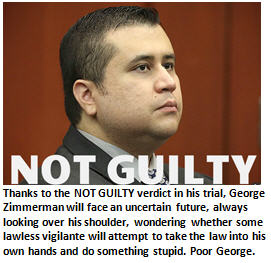 Race relations have been increasingly tense in Florida in recent years, fueled in part by controversial court decisions. In the aftermath of the Zimmerman verdict, media reports re-surfaced about another recent Florida Stand-Your-Ground case involving a black woman named Marissa Alexander. She was sentenced in 2012 by a mostly white jury to 20 years in prison for firing a warning shot into the air (no one was hurt) to stop her estranged husband, who had a history of abuse, from beating her. Some affluent whites living in gated communities argue the black woman got off easy, seeing as how a bullet hole in the ceiling can reduce the resale value of a split-level colonial by hundreds of dollars, not to mention city noise ordinances which almost certainly had been violated by the sound of her gunfire. 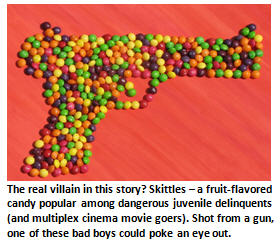 The sunshine state has a reputation for having a somewhat dysfunctional criminal justice system, not to mention a rather dysfunctional electoral system (e.g. hanging chads and limited polling stations in minority areas). So the Florida state legislature convened an emergency session after the Zimmerman verdict to look proactively for ways to avoid similar confrontations from happening in the future.

The conservative white male-dominated Florida legislature evaluated many possible solutions. One proposal would have required all black males who look potentially menacing to whites to register with the local police before coming within 50 feet of a white person. Another innovative proposal would have established whites-only “safe zones” where blacks would not be allowed to enter, unless they were there to serve as waiters, janitors or say, caddies at say a posh country club.

In the end, the legislature concluded that its rapidly growing population of paranoid elderly white citizens would never feel safe unless more drastic measures were taken. So by a vote of 151 to 6 (with all six black legislators opposing and three Hispanic legislators abstaining), the Florida state legislature overwhelmingly voted to become the first state to ban being black. The bill is expected to be signed by Governor Scott within weeks. And several other southern states are eyeing similar proposals.

Not surprisingly, some Floridians formerly known as blacks were shocked by the decision, arguing that at the very least they should at least be allowed to remain in the state as chattel like they were before the Emancipation Proclamation of 1863.

When asked where all the blacks would go once the law took effect, one white Florida senator replied, ”Frankly, that’s not really my problem. Those folks should have thought about that when one of their kind walked into a predominantly white, gated community carrying a loaded bag of candy.”

But in a move demonstrating compassion for millions of soon-to-be-stateless blacks in Florida, talks are already in motion to export them to an undisclosed West African nation in return for diamonds, bauxite and mangos – Floridians love their mangos. This would also be a shot in the arm for the region’s economy and would go a long way in reducing Florida’s stagnant unemployment problem. 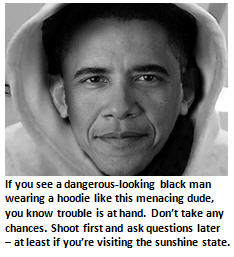 One white citizen, when asked about the impending ban on being black in Florida, was hopeful but felt more still needed to be done. “Sure, I’m all in support of a law to make our state safer,” said Buford Kuklanian. “But I’ll never feel completely safe till they do something about all them Puerto Ricans and Guatemalans. We let ‘em in here to mow our lawns and pick our fruit. But before you know it, they’re gonna be allowed to vote and take away my freedom. They need to be stopped.”

Some economists speculate that Florida’s tourism industry may suffer as a result of the impending forced exodus of blacks, particularly at places like Disney World. But Florida’s Department of Tourism is working on an aggressive marketing campaign targeting Scandinavian tourists. One slogan being considered: “Hey, Norwegians! Visit Florida. We’re a lot like you, white and blond – but with a lot more sunshine. Come see our Mickey Mouse state.”

or sharing this post on Facebook. And if you happen to be heading to Florida anytime soon, please be careful. That place is dangerous.