12 things I admire about my dad – By Emily Jones

[Note from Tim Jones: This week, I’ve invited my high school daughter Emily to take the reins of this column for the first time. I told her to write about whatever struck her fancy. Then I explained to her that “whatever strikes your fancy” means “whatever, dude.” I am confident that whatever she writes about will be in good taste and handled with maturity. See you next week.] 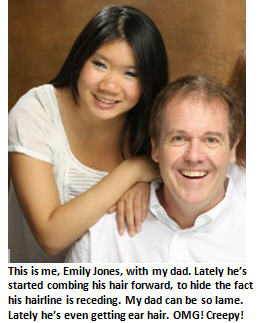 Hi, I’m Emily. My dad, Tim Jones, writes some stupid humor blog called View from the … Something or Other. I really have no idea what it’s called. I never read it. Because it’s like totally lame. He thinks he’s really funny, like the time he wrote that the dishwasher almost destroyed his marriage to my mom. Yeah, like my mom is ever going to cheat on my dad with the dishwasher.

Not that I would blame her. My dad is so boring. He’s always telling me stuff like “Kevin needs to leave by 9pm. It’s a school night.” That’s so unfair! All my friends’ parents let their boyfriends sleep over on school nights. And he’s constantly getting on my case if I get less than a B on a test. Gimme a break. He always likes to remind me that he was valedictorian at his high school and got straight A’s. And I tell him, “Wow. That’s impressive. And now you write a humor blog that five people read. I see what you mean about the importance of good grades, Dad.”

And what is his obsession with me keeping my room clean? He drives me crazy, always telling me to hang up my towels, or put my three-week-old leftovers in the wastebasket, or not to leave my curling iron lying on the bed still on when I leave the house. Like that’s going to start a fire. It’s never started a fire the other 9 times I left it turned on. SRSLY!  What is his problem about putting things away? None of my friends keep their rooms clean either. And then he says something about “if all your friends jumped off a cliff, would you jump too?” No clue what my old man is talking about. What’s my room got to do with a freakin’ cliff?

My dad just does not get it. His favorite TV show is something called Downtown Abby or something like that. If you ask me, a show about some urban advice columnist sounds bogus. Meanwhile he deleted all the recordings of my show Gossip Girls. He says he asked me eight times if he could delete them before he did it, but I only recall him asking me five times. Totally unfair. 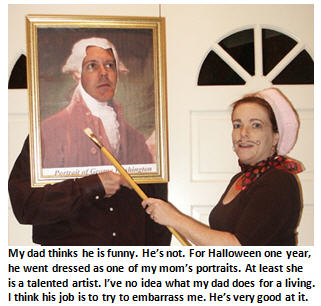 He’s also been “teaching me” how to drive – like I need any help from him. I’ve played over 60 hours of Grand Theft Auto, so I think I know something about how to drive safely through city streets at 80 mph. He’s so bossy when I’m driving, always muttering crap like “Do you think it’s a good idea to text while making a U-turn?” or “Are you aware you just ran a stop sign? Did you even see the lady with the stroller in the crosswalk?” Well, d’uh! Of course I saw her. I drove around her, didn’t I? He’s so worried about his stupid car. Like a stroller’s going to scratch it.

And he’s always nagging me about being online all the time, saying, “How about getting off of Facebook for five minutes and spending a little time with your family?” What’s that all about? I mean, we’re already in the same house, so why does he have to make it even worse by all of us being in the same room? He probably wants us to watch The Amazing Race together. Good show, but why would I watch it with my parents when I can catch it on Hulu.com in my room while texting my friends and updating my FB status at 2am?

Speaking of FB, my dad is such a control freak. He said that he wouldn’t let me have a FB account unless I friended him and mom. Hello? It’s not like I am going to post pictures of me getting drunk and making out at a party or anything. For those photos, I would always change my FB settings so only my close friends can see them.

He’s always giving me advice about making “good choices.” So boring. Like last Tuesday, when he stopped me as I was heading off to school. This time it was “You’re not wearing those 5-inched spiked banana yellow hooker shoes to school!”  Come on. It’s not like I was wearing a push-up bra and a skin-tight dress. (That’s for the party at Jeremy’s house this weekend.) 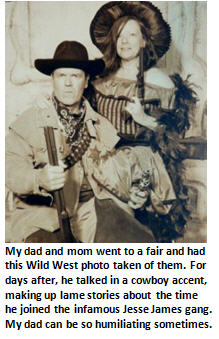 And look who’s talking. He tries to dress like he’s still young and hip, wearing blue jeans and rainbow-colored sneakers and sometimes not shaving for a couple days. It doesn’t matter. Whatever he wears, it’s always an epic fail. His favorite is a lame T-shirt that says Support your Right to Arm Bears, with a cartoon of a bear raising its arm. I refuse to be seen in public with him wearing it. The dude’s 58 years old. He still likes Skittles. He can be such a dweeb sometimes.

Sometimes my dad’s a bit of a creeper, too. Like when he comes home from work and tries to give me a hug, then kisses me on the top of my head and asks how my day was. Eek. Srsly, dude. Thanks for violating my personal space. And why does he always have to tell me he loves me? Got the message the first time.

Uh oh. POS. I have to wrap this up B4 my old man asks me what I wrote. I will just change the title to 12 things I admire about my dad and he’ll be thrilled. Probably start to tear up. He never had time to review my high school term papers, so I’m pretty sure he won’t bother taking the time to read this post either.

Oh, right. I think this is where I am supposed to write “That’s the view from the bleachers.” I guess my dad thinks that’s clever. If only he had a clue how lame he sounds.

PS:  If you enjoyed this week’s post by my daughter, please let her know by sharing it on Facebook, posting a comment or giving it a

.  I am so proud of my daughter. I can’t wait to read what she wrote.]