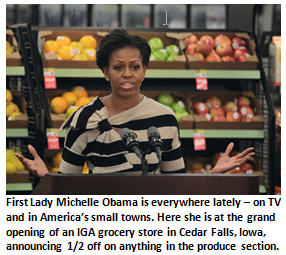 March 17: Travels to Paris to promote the launch of her new fragrance, Eau de Première Dame (which is a slightly sexier name than the original name, Recession). 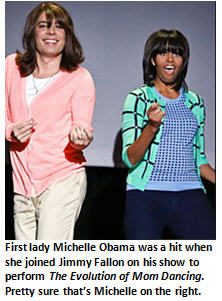 March 19: Travels to Hollywood where she will announce on Ellen her upcoming recurring guest role as Leslie Knope’s annoying neighbor who hates anyone who doesn’t exercise, on Parks and Recreation.

March 22: Travels to New York City to begin taping her new fitness show for the Oxygen channel, First Lady of Fitness. You don’t want to miss episode five, where she challenges Denzel Washington to see who can do the most abdominal crunches.

March 24: Travels to Rapid City, SD to celebrate the grand opening of the city’s first Panera Bread restaurant, where she’ll be helping the staff serve up free arugula-flavored tofu shakes for the kids.

March 26: Travels to Nairobi, Kenya to briefly run the country for a few days while Kenya’s President Mwai Kibaki goes in for gallbladder surgery. She’ll be performing his surgery too.

March 30: Travels to Vail, CO, so she can be seen mingling with other fit, beautiful people. Tentative plans include snowboard lessons with Brad Pitt.

April 1: Travels to Pasadena, CA for an appearance on Celebrity Rehab, where she will shock the world by revealing her struggles to overcome her obsession with wanting to buy anything she’s ever seen Condoleezza Rice wear.

April 3: Travels to Terre Haute, IN, to handle Eye in the Sky morning traffic reporting duties in Chopper 10 for TV station WTHI (Monica, their regular traffic person, is on vacation that week), after which she’ll throw out the opening pitch for the Terre Haute Rex minor league baseball team and play second base. Word has it she batted .317 in Cactus League AA ball.

April 4: Travels to Las Vegas, to be the opening act for Celine Dion. The First Lady will reportedly be performing her disappearing Bengal tiger trick for the very last time.

April 7: Travels to Martinsville, VA to compete in NASCAR’s STP GAS BOOSTER 500 at Martinsville Speedway, where she’s expected to give defending champion Tony Stewart a run for his money. Some sports purists complain she’ll have an unfair advantage since, in addition to being given the pole position, she’ll be surrounded by a motorcade of 12 armed secret service agents, which could present serious impediments for the other racecar drivers to get past.

April 8: Travels to Lakeland, FL for the ribbon-cutting ceremony for the newest West Ridge Lanes & Family Fun Center, “where fun and family come together”, mainly for the all-you-can-eat salad bar. 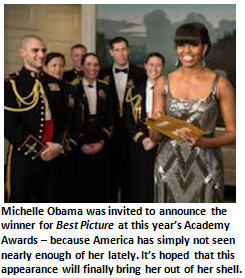 April 9: Travels to Los Angeles to take the place of Mariah Carey as one of the judges on American Idol. (But don’t tell Mariah. She doesn’t know yet.)

April 11: Travels to Pyongyang, North Korea to give the country’s young leader Kim Jong Un fashion tips about his hair and invite him to join her on her First Lady of Fitness show. (She’s hinted he could stand to drop a few pounds.)

April 14: Travels to Seattle, WA to give an inspirational lecture to restore people’s faith that the sun will one day return to the Pacific Northwest – despite all evidence to the contrary.

April 15: Travels to New York City to take over hosting The Daily Show while Jon Stewart goes on a 12-week hiatus to direct a film. Rumor has it she mostly plans to make fun of Joe Biden’s hair.

But the First Lady’s schedule is not without its fair share of down time.  She has scheduled time to relax with her family in Washington, from 6:15 – 8:35pm on March 25. Then it’s off to Nairobi, Kenya.

You simply have to admire her energy – and her bangs.

That’s the view from the bleachers. Perhaps I’m off base… Hey, look. Isn’t that Michelle Obama in front of Costco demonstrating a new, healthier juicer?

. If I get 1000 likes, I was assured Michelle Obama has agreed to be a celebrity guest blogger for me next week.