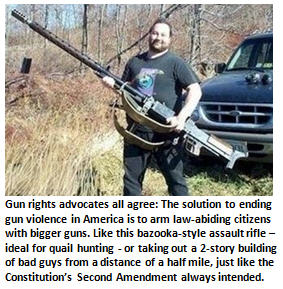 LaPierre’s core argument comes down to this: “The only thing that stops a bad guy with a gun is a good guy with a gun.” Millions of gun rights advocates were disappointed by LaPierre’s comments, however, arguing that the NRA stance does not go nearly far enough to protect the rights of innocent gun dealers.

According to Farland McArmem, a gun rights advocate from Biloxi, MS, “The solution is obvious. Just let every man, woman and kid pack heat at all times. That way, nobody’s gonna start a fight. Just think how many lives could be saved if everybody was packing a Beretta PX4 Semiautomatic Pistol in their pants. Nobody would ever think of shooting another fella – unless of course, they knew the other fella’s gun was not a semi-automatic, like theirs was.” 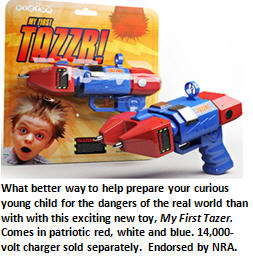 Billy Bob Higgins, a gun dealer from Talladega, AL, agrees but feels McArmem does not go far enough. “Don’t leave out the Taser. Sure, we’d be safer with guns in every kid’s backpack, but what if Little Johnny’s weapon jams? You need a backup plan. That’s why I think every child should also pack a Taser. Remember the scene in Hangover when the cop lets the kid shoot Zach Galifianakis with the Taser? Man, was that awesome or what?”

Most gun rights advocates argue strongly against calls to ban semi-automatic and assault weapons, citing the Constitution’s Second Amendment. “It says right there in the Second Amendment,” notes Bubba Mentalfart, a gun collector from Stillwater, OK, “ ‘The right of the people to keep and bear semi-automatic, rapid-fire firearms with high-capacity clips and laser scopes, shall not be infringed.’ If God didn’t want us to have these guns, then why in the Hell did Jesus put it right there in the Constitution?”

Still others have equally well-thought-out solutions to gun violence. Cletus L. Lynchem, a paramilitary supply dealer from Spartanburg, SC, thinks the key is not only a better offense but a better defense too. “Sure it’s all well and good to arm our teachers and kids with guns. I’m all for that, of course. But that’s only half the battle. Parents should make sure their kids are dressed in a Kevlar bullet-proof vest. That way, if the killer gets off the first round, our kids will still be safe. And my store has a great collection of vests in kids’ and teen sizes. Check out this Hello, Kitty Kevlar vest. Ain’t it adorable?”

These gun rights advocates may not all agree on the ideal combination of assault weapons, bullet-proof vests, crossbows and night vision goggles. But one thing they all agree on is that guns aren’t the problem. Lack of guns is.

Gun control advocates throw out specious statistics like the 1996 complete ban of semi-automatic weapons in Australia. In the 18 years before the law, Australia suffered 13 mass shootings – but not one in the 16 years after the law took full effect. But NRA members make the point that Australia’s gun violence problem abated primarily because most Australians are in a constant state of inebriation and unable to locate the whereabouts of their weapons. That’s why the NRA now supports legislation lowering the drinking age to 11 – for safety reasons. 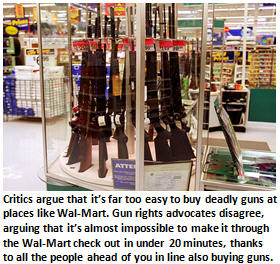 Some liberals argue that guns are far too easy to buy, noting that a shopper can purchase a semi-automatic rifle at any Wal-Mart store as easily as buying hair curlers and size-20 leopard-skin tights. But Constitution-loving gun owners point the finger of blame squarely at the person pulling the trigger – mentally ill people.

“Guns don’t kill people,” said an NRA spokesperson. “Deranged whackos with guns do. That’s why we’re pushing for legislation to immediately institute a complete ban on all mental illness.”

Buford Ghettacloo of Possum Trot, AL, summed up the gun advocates’ case persuasively: “Once they finally make being mentally ill a federal crime, that should solve this pesky problem once and for all. And the rest of us can go back to using our guns to shoot pheasants, Muslims and liberal commie politicians at rallies, the way Jesus taught us.”

And the debate goes on. (Lord, help us all.)

PS:  There is nearly one gun in the USA for every American, making this nation by far the most heavily armed country in the world. Please tell your Congressperson that stricter gun control legislation is long past due. There is no place in our society for assault weapons of any kind. The right to own a gun for hunting is not greater than the right to protect our families.