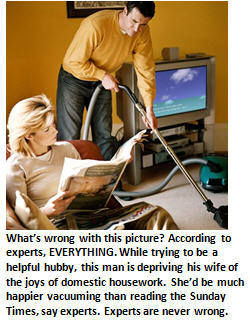 Experts have weighed in with other more credible theories in an attempt to explain these startling findings. Perhaps more “modern” marriages, based on equally shared roles in housework and decision making, have a less “sacred” view of marriage “till death do us part” than traditional marriages. Another theory is that in more egalitarian marriages, where housework is equally shared, the woman is more likely to have her own career, may be less financially dependent on her spouse and thus better able to leave a bad marriage. 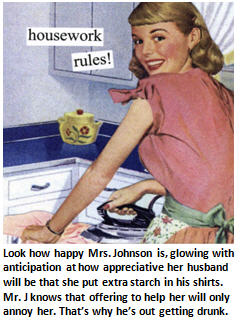 These theories are, of course, wrong. The real explanation is that women find doing chores like unclogging the toilet deeply fulfilling. They take personal pride in managing all domestic matters so their hard-working husbands can kick off their shoes after a day at the office updating their Facebook status and tweeting about last night’s game on ESPN.

Women are happiest, this study conclusively proves, when they can come home from their own day job to make a healthy home-cooked dinner, clean up the dirty dishes, do the laundry, help their 2.5 kids with their homework, and then dress like a hooker at bedtime for their husband’s amusement. They are content not to interfere with their tired husband’s enjoyment of Monday Night Football. After all, the Patriots are playing the Packers.

Norway, where this study was conducted, is one of the most egalitarian societies in the world, especially if you’re a man. And this groundbreaking study, sponsored by the Oslo Elks Lodge # 27, shows that husbands who care about their marriage know to step out of the way and let their little lady take charge as CEO of Household Cleaning Inc.  A good way for men to step out of the way is to play a round of golf, or if you happen to live in Norway, go ice fishing. Don’t worry about your wife missing out. She’s having way too much fun picking up your clothes and dirty dishes so she can get the house ready for your weekly poker night with your golf / ice fishing buddies.

Other related studies support the findings of the Norwegian researchers. A recent Italian study found that women who chronically complain about their husbands’ tawdry extra-marital affairs are more likely to cause their marriage to end in divorce. Another study showed that male partners who engage in frequent episodes of promiscuous sex with other females are often held in higher esteem by their female partners. However, scientists are split over the relevance of these findings to American marital happiness since the study involved Proboscis Monkeys in Borneo. 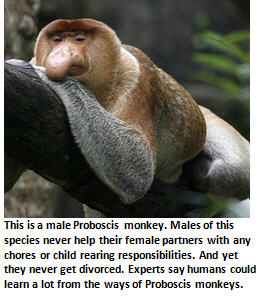 One thing is clear: men who care about the well-being of their marriage know that when it comes to chores, women are the superior sex. If you feel compelled to help with the chores, experts suggest badly mangling the task. Try washing the whites with the colored fabrics so that her egg shell blouse turns pinkish blue. This will ensure that your wife never entrusts you with the laundry ever again, and you’ll have taken a big stride towards cementing a happy marital partnership.

Listen to the Norwegians. They invented IKEA and cheese slicers, so they know a thing or two about social progress. When they say that men sharing in the housework is a one-way ticket to Divorceland, men should follow these instructions (which, by the way, are much easier to follow than the instructions on the IKEA TV cabinet I was unable to assemble until my wife figured it out).

Because I care about my marriage, recently I have let go of my selfish pattern of depriving my wife of the pleasure of doing all the chores. But there is a downside to my thoughtfulness. Today I noticed that my wife missed a large section of grouting in the bathroom tile. Last week she did a slipshod job ripping up the downstairs carpeting and installing and staining the wood flooring. I thought the stain came in a shade too light.

Ever since I graciously let my wife take over all the housework, I have to say, she’s been starting to let things slip. I’m concerned she’s going to ask me to start helping with the yard work. But I love her far too much to deprive her of the joy of raking leaves.

PS:  If you enjoyed this week’s post, please let me know by sharing it on Facebook, posting a comment or giving it a Like.  It can’t be any more of an unpleasant chore than your spouse’s request to scoop the kitty litter.