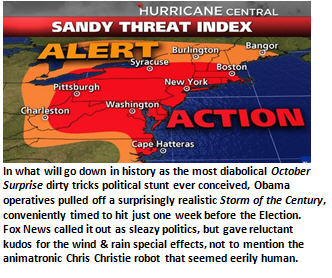 The days immediately following this election paint a confusing picture of what lies ahead for our divided nation. Prominent analysts on the left speculate in the coming months, America will be transformed into a modern Garden of Eden (minus the serpents), every out-of-work American will become gainfully employed with a corner office, house values will increase by 400%, and Donald Trump will be fired and shipped to Kenya, while his hair will remain on permanent display at the Ripley’s Believe It or Not Museum in Gatlinburg, TN.

Meanwhile, political pundits on the right see a slightly different near-term future when looking into their crystal ball. According to their assessment, thanks to Obama’s stolen electoral victory, America will now rapidly descend into an Orwellian Hellscape in which small businesses will be taxed at three times their income, Christians will be forced to marry gays assigned to them by their new Chinese overlords, and blacks will now be legally allowed to own whites as slaves. Some skeptics argue this scenario is an exaggeration, citing that most Chinese overlords don’t particularly care for gays. 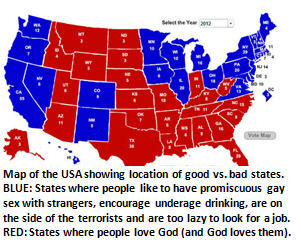 Which version of the future will take hold is impossible to know for sure, unless you’re Glenn Beck. He’s psychic. Exit polls of voters provide startling early indicators of what lies ahead. When asked how they see the outcome of the election impacting their lives, the responses varied greatly. Nathan Ghitajohb of Brooklyn, New York, observed, “I voted for Obama. In the two days since the election, I have already seen an amazing improvement in my life. I no longer have pain in my hip, I got the winning ticket in the Powerball lottery, and I’m pretty sure my bald spot is noticeably smaller than it was a week ago. Thank you, Obama.”

But Hector Dorkenbrain of Biloxi, Mississippi, who voted for Romney, does not share Ghitajohb’s optimism. “Ever since the election, I barely recognize my country anymore. Now that Obama has been re-instated as Commie-in-Chief for another four years, I’ve heard he has made it mandatory for retirees like me to serve two years in Afghanistan to be eligible for Medicare benefits – or maybe it was Obamacare. Either way it seems wrong.”

Obama’s first orders of business in his second term, as reported by Fox News, will be to require everyone over seven to get an abortion – including men – and eliminate the Department of Defense, before surrendering to Iran. Then in February, buoyed by his success with the auto industry takeover, he plans to initiate a government takeover of all Fortune 500 businesses, converting them into federal agencies run by striking union leaders from Wisconsin. Good news, however: There may be some job openings at the newly formulated Department of Facebook.

Despite Romney’s concession speech, the final outcome of the election is not known for sure just yet. The Romney campaign plans to challenge the results of the election. They have assembled a crack team of attorneys and venture capitalists to make their case that Romney’s Super PACs used perfectly legal means to buy the election, so technically, not to award Romney the presidency would amount to America’s welshing on a business deal. They will also challenge several state Supreme Court decisions which they argue unconstitutionally overturned Republican-initiated voter registration statutes requiring voters to prove they had stock portfolios of at least $100,000 or investment property in the Seychelles. 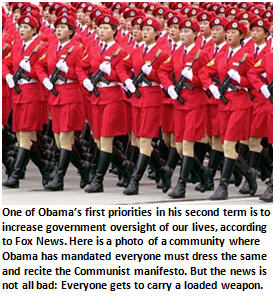 Meanwhile, Romney’s legal team is hotly contesting the voting results in the Buckeye state because, according to their calculations, the several thousand electronic voting machines they tampered with should have been more than enough to insure a Romney win in that state. They accuse Obama operatives of out-cheating them.

Still, even if the Republican challenge to the election fails and their bleak vision of America’s future under another Obama term takes hold, the news is not all gloomy. Conservative religious scholars remind us that the world is scheduled to come to a fiery, cataclysmic end on December 21, 2012. So worst case, we’re talking about America’s post-election nightmare lasting no more than seven weeks. For many on the right, that date can’t come soon enough.

[And this quick update to a previous VFTB post from a few weeks ago. While technically the deadline for voting is over, don’t tell that to Howard and Marjorie Grunfeldt, a retired couple from Pickerington, Ohio. They are still undecided. They are currently leaning slightly towards Romney because of their concerns about Obama being the Antichrist; however, they’re impressed by the Antichrist’s prescription drug coverage plan.]

. But don’t delay. Read it before the world comes to an end next month. It just might mean the difference between going to Heaven or that other place.